I got out yesterday for a little social distancing in SE Mn. What a beautiful day! I don't catch many brookies, but cherish everyone. Stay safe
D

From a week or so ago. Southeast MN.

I sure hope the camera person was at least 6' away!! ound:

Sorry. Couldn't resist with all the stupidity going on of people being chastised for peeking out the door to see if the world was still there.

I need to get out, BWO`s are on and Caddis are starting- Work is slowing up for me, probably not working full weeks for awhile, it will give me a chance to fish during the week.

Great pics and reports guys, inspiring and it just makes me appreciate the driftless even more these days, we do really have seriously great trout fishing.
B

FlymanSJB said:
I need to get out, BWO`s are on and Caddis are starting- Work is slowing up for me, probably not working full weeks for awhile, it will give me a chance to fish during the week.

Great pics and reports guys, inspiring and it just makes me appreciate the driftless even more these days, we do really have seriously great trout fishing.
Click to expand...

Indeed, Flyman, I saw significant hatches of caddis and Baetis over the weekend.

I got to the spot around 6am on Sunday and hiked a good way as I wanted to scope it out. The spot was new to me, but seems rather popular among anglers as I almost always see someone parked there by 9ish. Very pretty landscape and nice runs which have been blessed with the handy work of TU.

Deep nymphing and drifted/swung leeches produced a few early fish, but things tended to shut down quite a bit midday. I saw quite a few prints so I reckon the stretch had been fished the day prior. I enjoyed the fresh air and the sunshine though, after a week of work-from-home confinement.

As I worked my way back, I encountered a pair of kayakers and decided to wrap up a bit early. On my way back to the truck I found that another angler had decided to jump in and fish upstream of me. I gave my etiquette bit in a friendly way, aided by the knowledge that the kayakers had generally spooked everything already. And to be honest, I kind of expected it, picking such a popular spot.

Well, I had a gotten little carried away on the hike in and ended up a few miles out and had given myself some serious blisters, so it felt good to ditch the wading boots and socks. I had a decent amount of sunlight left, and more than enough gas to get home, so I drove around and scoped out some other spots in the area. I was just about to head home when I spotted a brown jumping clear out of the water at very unassuming crossing...

So, I put the socks, waders, and boots back on (the blisters weren’t all that bad) and had a go. Caddis were everywhere. So out came the elk hair, but not even a refusal. I decided to relax and observe for a bit, and sure enough I had missed it. Olives mixed in, masked by the flurry of caddis, with the trout showing a clear preference for the former. And the rest is history.

I have to add, I’ve never seen that many anglers in the driftless. I think this can be a good thing, and hopefully these folks will come to know, respect, and advocate for the resource. One thing that always surprises me, though, is seeing people cram into the same stretch. As I’ve stated previously here, this is unnecessary - there is so much water in the area. So, if anyone here is struggling to find a spot to fish, feel free to send me a PM and I will give you some resources. Exploring and finding new places is half the fun if you ask me.

Lastly, this is perhaps not entirely in keeping with the theme of this thread, but I thought I’d post this PSA from the good folks at Driftless Angler. I thought their advice on fishing the area, given the current public health situation, was spot on. Every year where I fish this time of year from first hatches to walleye opener is busy, once cabin season starts the traffic dies off considerably. But its true fly fishing is becoming less of a novelty between spring and walleye season and more year round most that take up the fly are conscientious and its up to us to teach them that our beloved streams and rivers are not a grocery store food source, it takes years to grow good sized wild trout and the fishing is so good because of catch and release.

I like the driftless angler and that is a decent posting by them, I would just add that paying at the pump is not stopping and socializing. I think all the fly shops do a good job on education on the driftless and organizations do a lot of good as well.

This year is worse because unemployment is pretty high right now, the numbers dont show it but most people are on furlough and not really officially unemployed. The parks, trails everything is busy outdoor related and it comes with nice spring days after the long winter and needing some space to de stress and think. Baetis have been fairly consistent in southeast Mn for a while, and the first real gray caddis action was on the way until it was derailed by some very cool weather (snow here yesterday at times). The Dark Hendrickson hatch is the one that should be going right now, but may come off later in the month or later in the day as temperatures are finicky. Better weather is still a week out, and the hatches will start up with consistency then.

Yesterday was a beautiful day in NW Wisconsin, so I made it out on a couple of streams. I only saw two other fishermen, a couple fishing together that kept an appropriate distance from me on the first steam (appropriate in therms of fishing etiquette and COVID distancing).

The first stream was kind of slow, but got a few small brookies and browns on dries. There was a mix of midges, BWOs, little black stones, and probably some caddis, but never a big concentration of any.

The second river was one I hadn't ever fished before, but will definitely be back. It's fairly tough to fly fish due to overhanging trees and tag alder but I managed to land a few medium size brookies and had several browns hit my streamer but not stay hooked. The highlight was a big brown that wholloped my wooley bugger, ran downstream, jumped clear out of the water, then broke me off in a tangle of wood. Next time I go to this river I'll definitely use heavier tippet and something other than my 4wt bamboo...

Yesterday was 60 and sunny, today it's 30 and snowing. 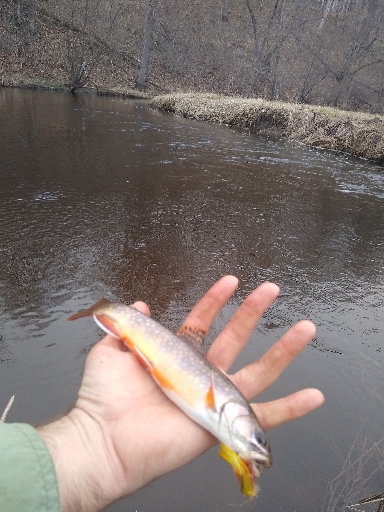 I don't think there is anywhere in Iowa that could be far enough from any road for an 8 mile walk.

We did the two car bit: drop one at the end, fish from car A to car B. It's a nice way to cover a lot of water. Plus, this time of year, the walking is easy.

I got out on Saturday, which was a perfect spring day. The creek I was on was crystal clear, so I decided at the truck it was going to be a dry fly day. There were a few caddis about, so the #16 Elk Hair got the nod, and I did see one black stone early on. The midges came off on schedule from about 1-2:30 and then it was over for them. I'm glad the midge season (for the most part) is winding down because a #24 midge cdc's is getting really hard for me to see on the water anymore. That's probably why I enjoy Hopper season so much . Stay Safe out there!

Glad you got into some dries, Jeff. I turned over a bunch of rocks Saturday. Not a ton of bugs to be found where we were. Baetis, a few DH, lots of really small green caddis larvae (probably the gray caddis that should be going soon). I do know guys are starting to have really good success with crane fly larvae. Tied up some last night using Kiley's Latex Skin: Kileys Nymph Skins | Trident Fly Fishing

It's pretty neat stuff to tie with. Have tied a bunch of caddis larvae with it, too.

We got 7-8 inches of real snow in southeast MN. My armchair meteorologist prediction: it will be here for a bit, yet. Upper 50's for the harvest opener Saturday. Some real caddis could be on the horizon in a week.

ontheflymn...Is that a picture of you in your post? If so, I see by your hat, we may be members of the same Fly Fishing group...LT?