The backstory- I grew up in a family of hand line flounder fishers, from a boat, in the ocean. Somehow when I was 13 I became interested in freshwater fishing. Probably due to some American Sportsman TV episode. So, I went out and bought a St. Croix 9' fiberglass rod and a Medalist reel from the local Army/Navy store that had a small sporting goods department. Well, I didn't think it too far through this idea because I didn't even know where there was a river/pond/lake to try this out, and I didn't have the mean to get there even if I did, so the rod was hung up in the garage rafters.

When I was 15, my older sister married a guy who like to freshwater fish. (Woot! Woot! Finally!!!) but he didn't know anything about fly fishing- he was a spin fisherman. So, I went back to the Army/Navy store and bought a Berklee rod and a Mitchell Garcia 300 reel (still have and my son uses it), and the St. Croix remained hanging in the garage. Well, I must have spent enough time in local bait and tackle shops after that because at some point I bought a Fenwick 806 rod too...but that never got used either until just a few years ago.

Fast forward to the late 70's and my interest in fly fishing picked back up and I built an Orvis Far and Fine from a kit. That rod carried me through most of the 80's, 90's and 00's until I got a newer Orvis rod to add a little length....and that St. Croix stayed hanging in the garage rafters. Until today.

I thought it was time to break it out and see what it was all about. I mounted my old Medalist with a 6wt line and headed off to a small local brook. The handle still has tape residue from when I covered it with black electrical tape to make it look cool.

Third cast and I hooked a monster (actually I didn't even know the fish was on the line)! But, the important thing is- 53 years later and the rod finally got wet and saw a fish... actually a few. Here's the first, a river monster!

And now, it's back hanging in the garage. It's whispy, heavy and difficult to cast. I probably won't take it out again. But I'm glad I did. 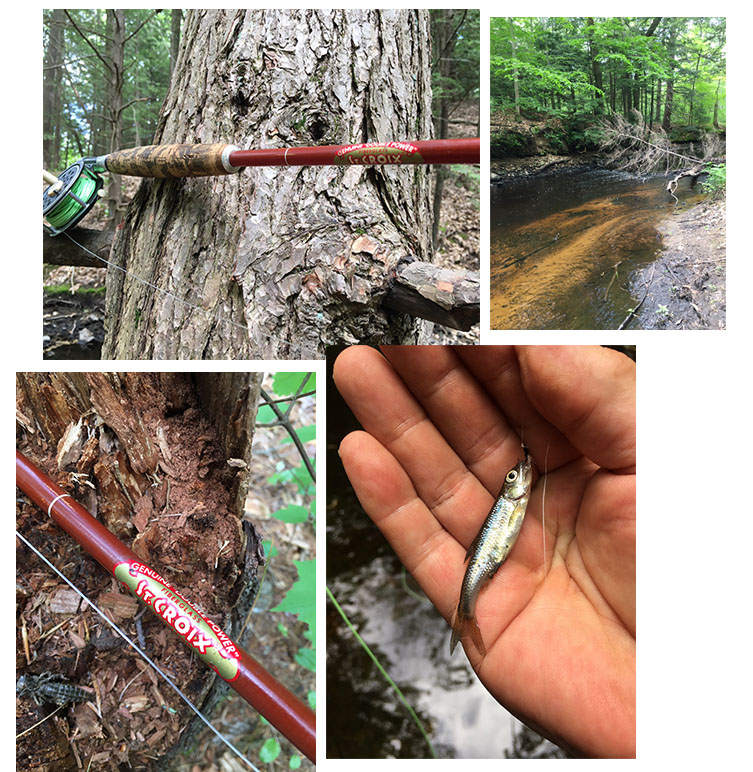 Your story brought me a smile. Thanks!!

Only half a century, good story
P

Better late than never I guess

And looking at the photos, my monster looks like 'bait'.
P

There are so many ways to go with your story, but for me, its about never quitting, and for all the great rods we have today there was something special about growing up in the 60,s and early 70,s with some really bad rods but still having the time of my life!
Mike

Nice. Worth the read. Thanks!

I write about and of course fish fancy fly rods all the time but if we go back long enough in time I too fished a wood framed handline with green twine.
P

sweetandsalt said:
I write about and of course fish fancy fly rods all the time but if we go back long enough in time I too fished a wood framed handline with green twine.
Click to expand...

Ours were wooden posts joined into a square frame that held a dark brown heavy cord like string. And probably from use, the string developed a particular smell that was of the ocean. Not terrible, but unique. Every once in a while I'll come across a similar odor and it brings me back to those days. Kind of like the smell of Play-Dough and my time in kindergarten.

Good thing the rod was strong enough to sport 6 weight line or that monster might of broke off...