A Respite From Lockdown

We were 2 hours into our drive, when a shadowy figure ran across the road. At first, we thought it was a big bobcat.

"That wasn't no bobcat. It had a long tail! It was an actual juvenile mountain lion. That's like finding a needle in a haystack around these parts!"

We sat in silence as the truck continued down the 4x4 road, finally reaching the bottom of the valley floor, the rush of the creek playing its symphony, composed by the yearly spring snowmelt. We set up camp in the dark, the full moon illuminating the entire valley floor. No need for the headlamps that night.

After pitching the tent, putting fresh batteries in the lantern (since no campfires are allowed), and walking down to the creek once in a while to pick up the stash of beer cans we had placed there upon arrival, we talked into the night, that kind of talk that now seemed important after having spent weeks in quarantine and finally being able to see the stars again. The sight of the mountain lion kept repeating in my head.

We slept till 10 am, and after a light breakfast, we geared up and headed downstream to see if these fish were not on a stay-at-home order.

The bites and quality of fish became better the further downstream we went, but the trail disappeared often, which made travel difficult. Because I was wearing casual 'water socks,' kicking rocks and slipping on boulders was the norm, and became quite frustrating.

We did meet up with two members of this board, yikes and dunk91007, while we had finished our lunch streamside and we conversed for a while. We've been communicating on the board for years, but had never met, so it was good to meet them. They were on the the way upstream on their way home, and I hope they had left some fish for me downstream.

I didn't see one fish looking up, so to increase my chances, I moved from the dry dropper rig and tied on a nice Air Lock and began nymphing the deeper pools which seemed to be the ticket. Like most SoCal streams, it didn't matter what fly you used, as long as your presentation was pristine. Things never change. 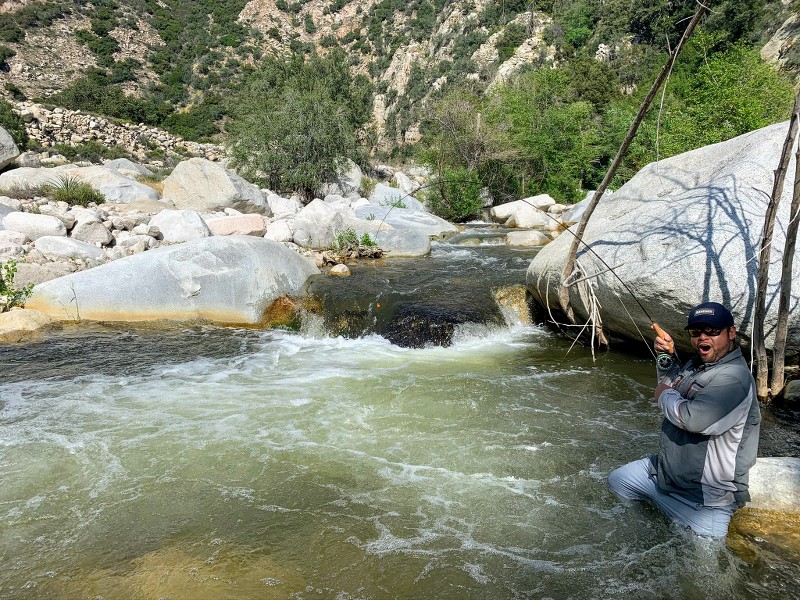 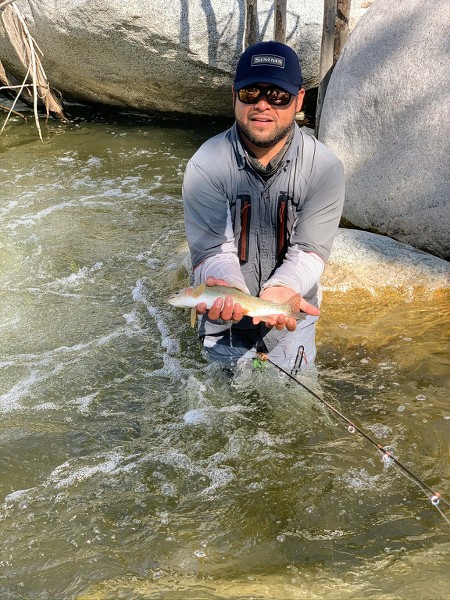 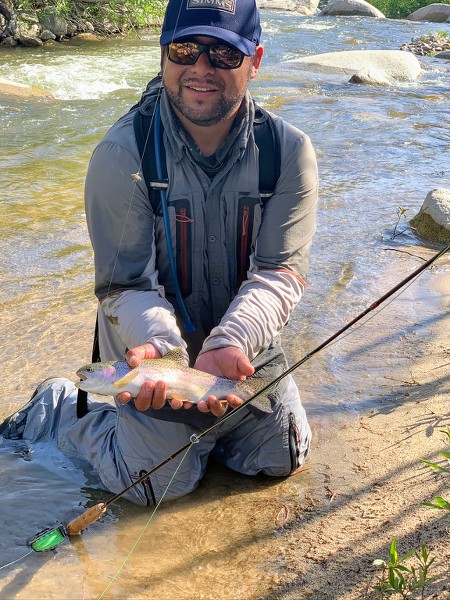 Catching a couple of 12" fish in that creek is definitely something I was looking forward to, considering that the last time I went fly fishing in early February, I caught ONE 6 inch fish, got rained on, got hailed on, and almost got bit by a rattlesnake. The fly fishing trifecta.

We spent the late afternoon making the hour hike back to the campsite. As the sun went down we prepared our drinks and some dinner and chatted the night away. When we woke up the next morning, we were both so beat from the previous day's hike, we milled around the campground until the flies became too bothersome, and we broke up camp and headed back to Lockdown Los Angeles.

After getting my camping legs back, I cannot wait to do a bit more dispersed camping in the upcoming few, and try out some new gear that I have purchased.

yikes, dunk91007, it was a pleasure meeting you two! It was finally time that it happened. We definitely gotta get on the water more often. I'll be making my way to the JBD next Saturday and hiking a good 3 miles upstream to see what the Big K has to offer.
A

Shoot me a pm next time you go out if you can. This kind of fishing is my jam, and I'd love to put some faces with the screen names!
Y

It was great to meet you too, after all this time!
Funny, earlier that morning we said that the more years passed by without crossing paths, the more the name "DarkShadow" was growing in stature in our minds as some kind of So Cal fish whisperer. Another few years like that and we would have convinced ourselves you were a mythical legend.

I owe much of my adventures the last few years to your early posts. You never hotspotted the locations on these forums, which left me curious enough to explore our mountains on my own, and I found some other great thin blue lines along the way.

Grateful to be out on the water again!

And the Cali guys on the whole always post some incredible scenery pics. The final straw was a report by Seansquid's in the Sierras that pushed me over the top and I have the permits for an Eastern Sierra trip of my own on 8/15/2020 if thats possible. We will see, I guess

Thanks for the kind words, guys!

Getting the wet wading gear ready for a little long day trip tomorrow to one of our more 'local-er' rivers.

Trying to hike 4 miles from the trailhead to avoid the bikini and inner tube hatch that is gonna happen once all these people that have been locked down finally get their leashes off and go run into traffic and chase parked cars.
T

Hope you do well. Had a very nice day on Tuesday on the WF 5 miles up. Got into a hatch but never saw the insects. No matter, a 16 caddis worked well.

tomsakai said:
Hope you do well. Had a very nice day on Tuesday on the WF 5 miles up. Got into a hatch but never saw the insects. No matter, a 16 caddis worked well.
Click to expand...

Did you hoof it or did you take a bike?

I've honestly not had too much luck on the WF, then again, I haven't fished it hard like I do on other creeks.

In fact, one day I traveled downstream from the lot and still got my butt handed to me.
T