A good friend and I backpacked into two drainages filled with alpine lakes with the intent of catching some golden trout for the first time. We hit the road last friday after a half day of work and got to the trail head around 600pm. We hiked until after dark and cowboy camped along side a medium sized brookie lake. The moon was near new and the sky was clear so the stars were amazing. Overnight, it got way colder than expected and we woke up with frost covering our sleeping bags. The following morning we fished for about 30 minutes and caught 4 or 5 pan sized brookies in the shallows. We then bushwhacked up the drainage to a large lake just below the timberline. The wind was quite outrageous, so we decided we would setup camp on the banks of this lake in a thick grove of trees which offered excellent shelter from the wind and sun.

This is the view from our campsite:

We ditched our gear and hiked farther up the drainage to the upper lakes which are rumored to hold large golden trout. We saw a nice sandy shelf on the west end of the lake we camped at, and took note to fish this later. 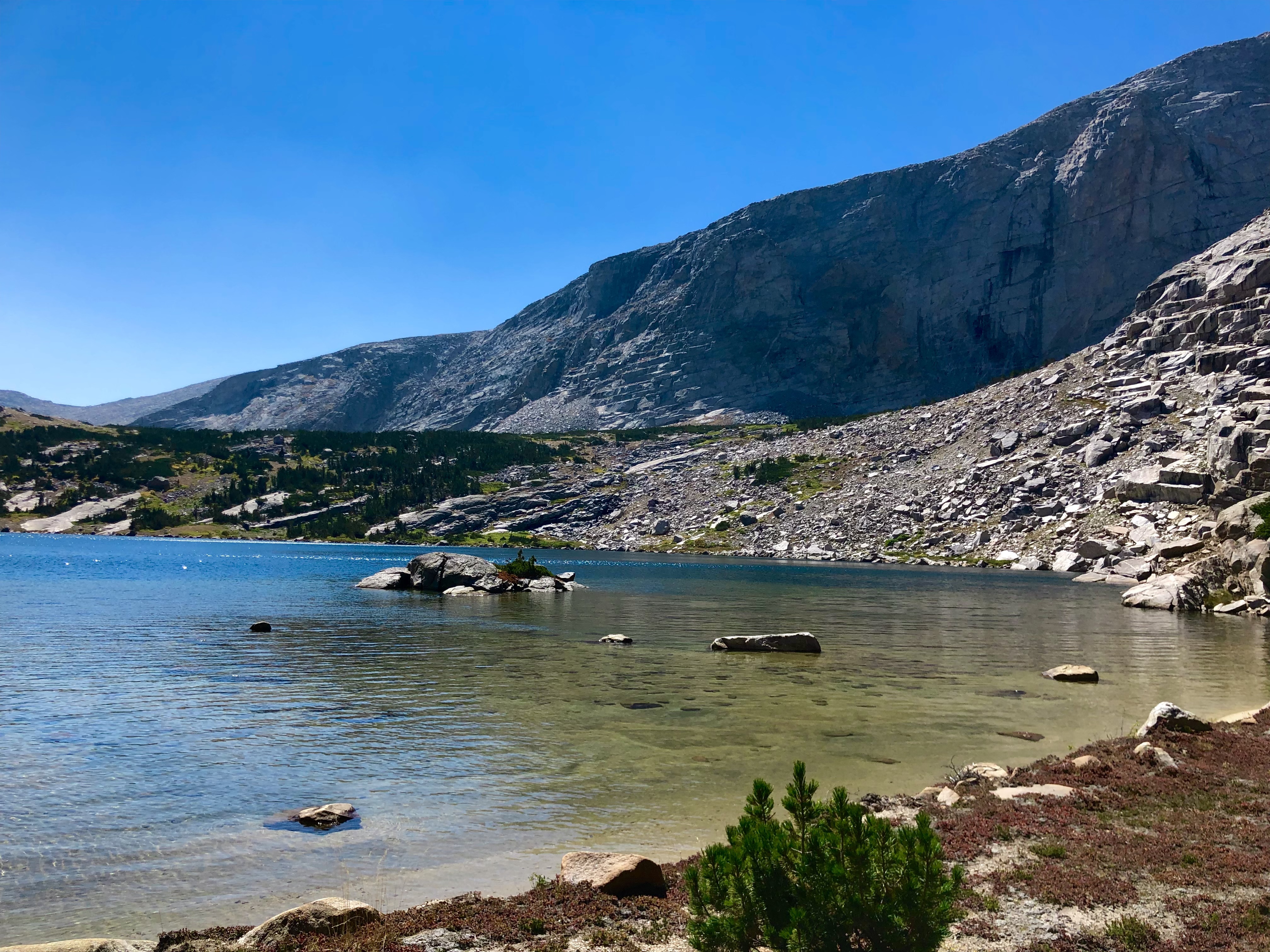 Half way up to the object lake, looking back you can see nearly every lake in the drainage, which was quite an impressive view. We arrived at the object lake at about 130pm and started fishing. We noticed that a very dense hatch of crustaceans (either scuds or fairy shrimp) had taken place near the inlet of the lake. We could see trophy sized goldens gorging themselves on the hatch and attempted to entice them with scud and fairy shrimp imitations. They curtly rejected every presentation nonchalantly. We walked up the south bank of the lake and saw many large goldens holding as if they were in a river and seemingly not eating anything. We presented nearly every pattern in the box, including scuds, fairy shrimp, minnows, leeches, nymphs, trash flies, and dries. We tried sinking line, midge tip, and floating line. We casted from shore and from float tubes. We sight fished and blind casted. All of our efforts yielded not a single take. We also saw that no other angler brought a single fish to net during the day. We packed up and headed down to our campsite discouraged, but hopeful that the following day would be better.

Early the following morning, we hiked up the 1000ft over a half mile through the rugged boulder field back to the lake that spanked us the previous day. We saw no fish and had no strikes for hours until at about 930am, my buddy set the hook on this beautiful male golden:

Shortly after, another angler caught a similar sized golden. Less than 30 minutes after the first catch, the fish went just as dormant as the day prior. Before noon, we decided we couldn't spend any more time at this presently nonproductive lake. So we hiked back down the drainage. We found a solid outflow from the lake near which we camped by. This was clearly a stream that maintains flow year round and was also below a lake that only held goldens. We decided to sight fish with dry flies for the fish that the stream held and it was quite entertaining. The fish in this stream were certainly small, but more notably colorful. They spooked easily, but holding lies were few and far between so all we had to do is rotate between holes and make a good first cast and these fish willing took our dries. 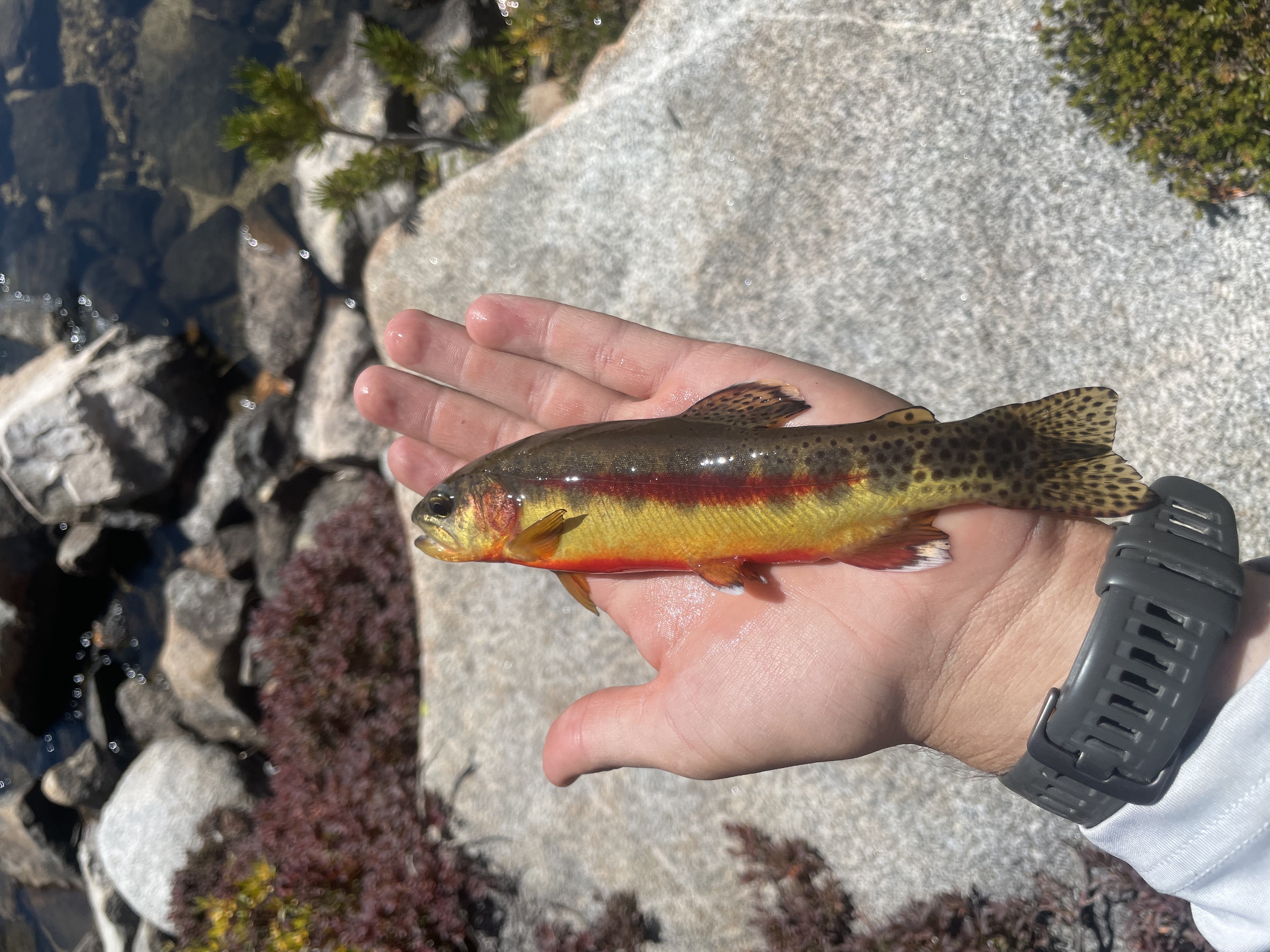 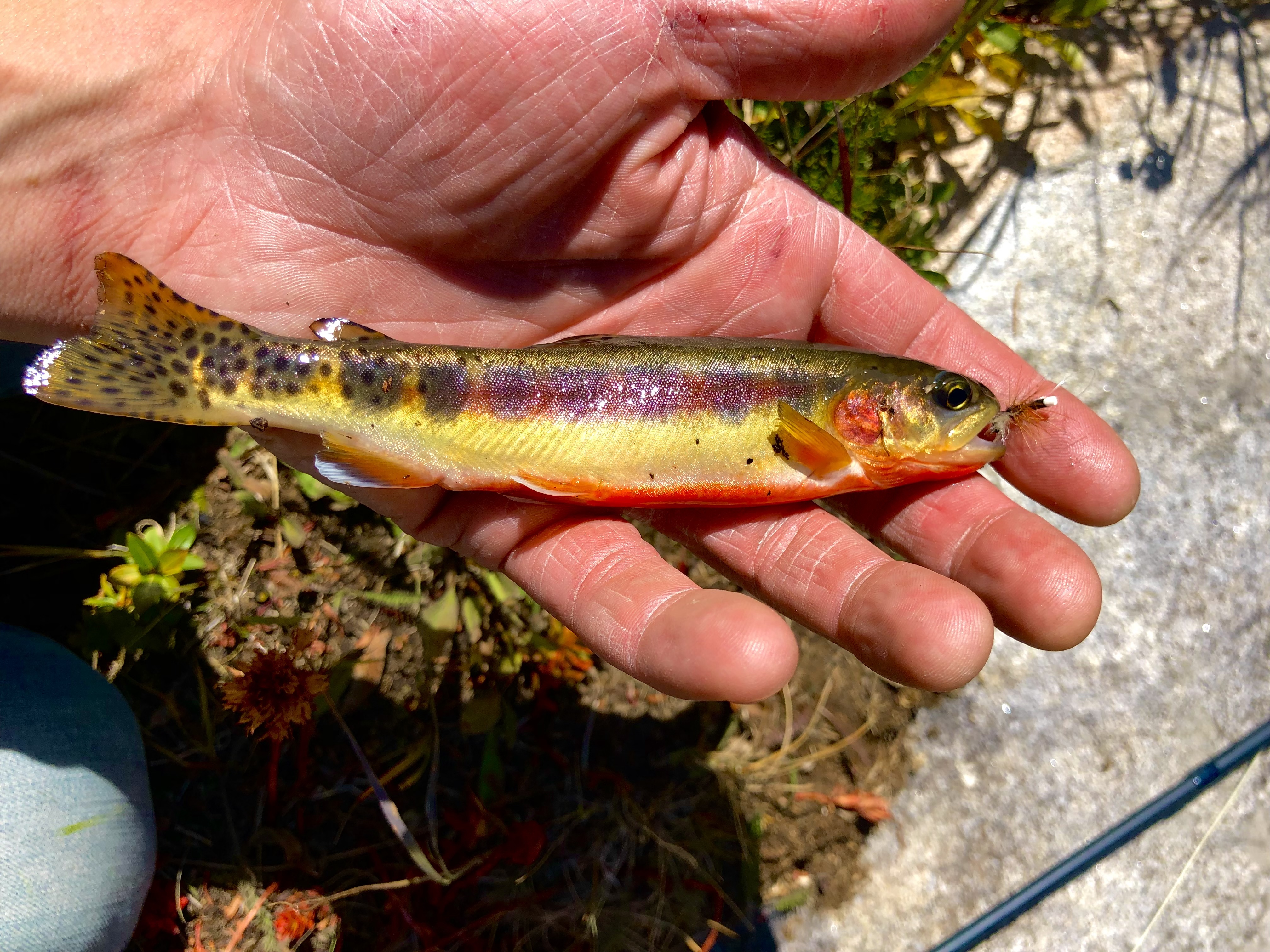 We continued down the drainage looking northward for an opening into a small box canyon that linked this drainage to the drainage immediately north. We found our gap and climbed upward to a lake that was supposed to hold an abundance of wild brookies. 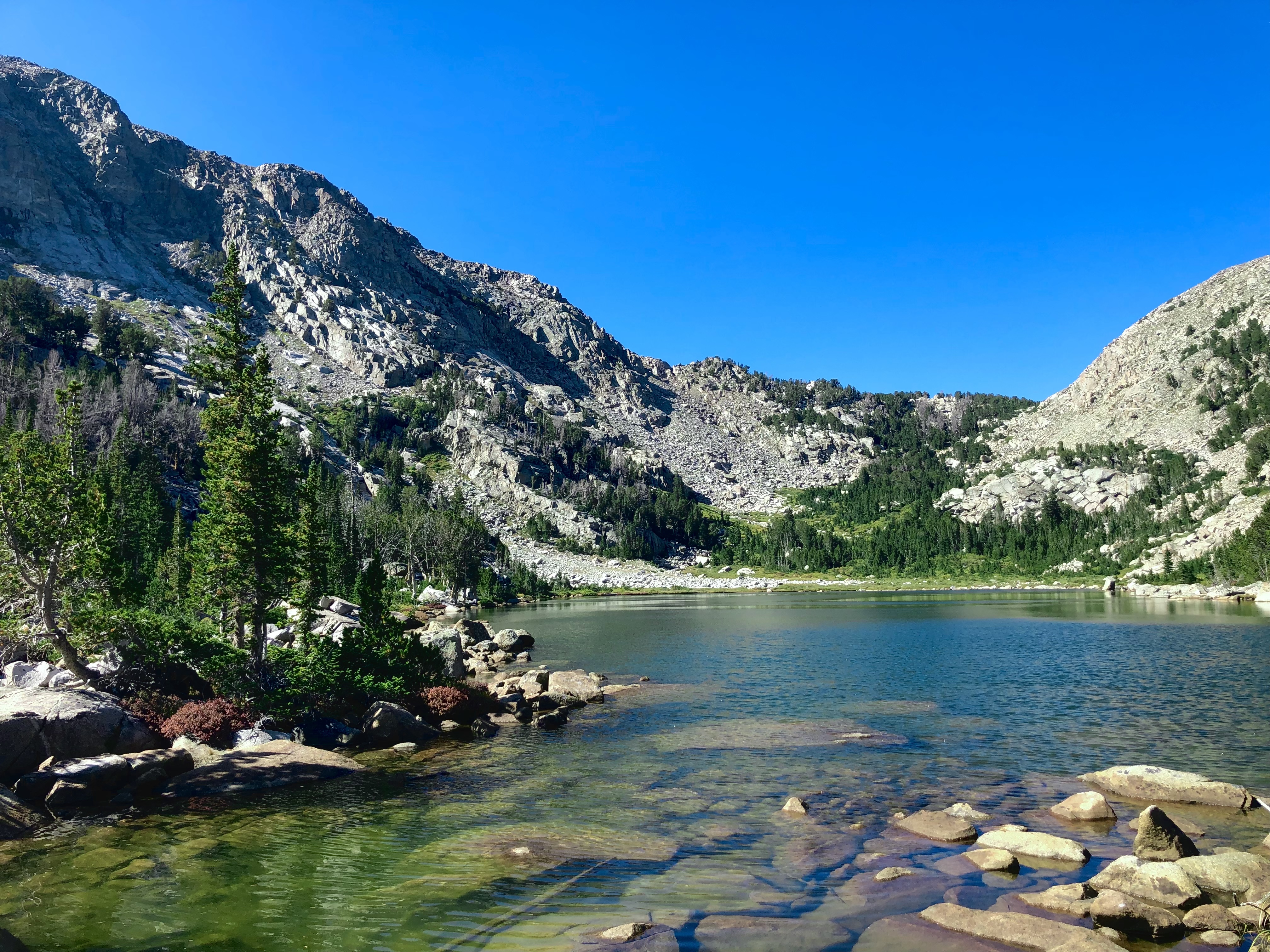 We fished off large boulders stacked up on the east side of the lake and caught a fish to nearly every cast for the first hour or more. After recognizing that many of the fish caught were noticeably stunted, we decided that this was a great opportunity to eat something tastier than freeze dried meals. We harvested two ~15" females and both were found to be ovulating so we also harvested their roe. We then made our way up the box canyon to an unmarked pass to the drainage immediately north of where we started. The intent was to fish another golden lake at the top of the drainage. It was a beautiful, gin clear lake, above the timberline. 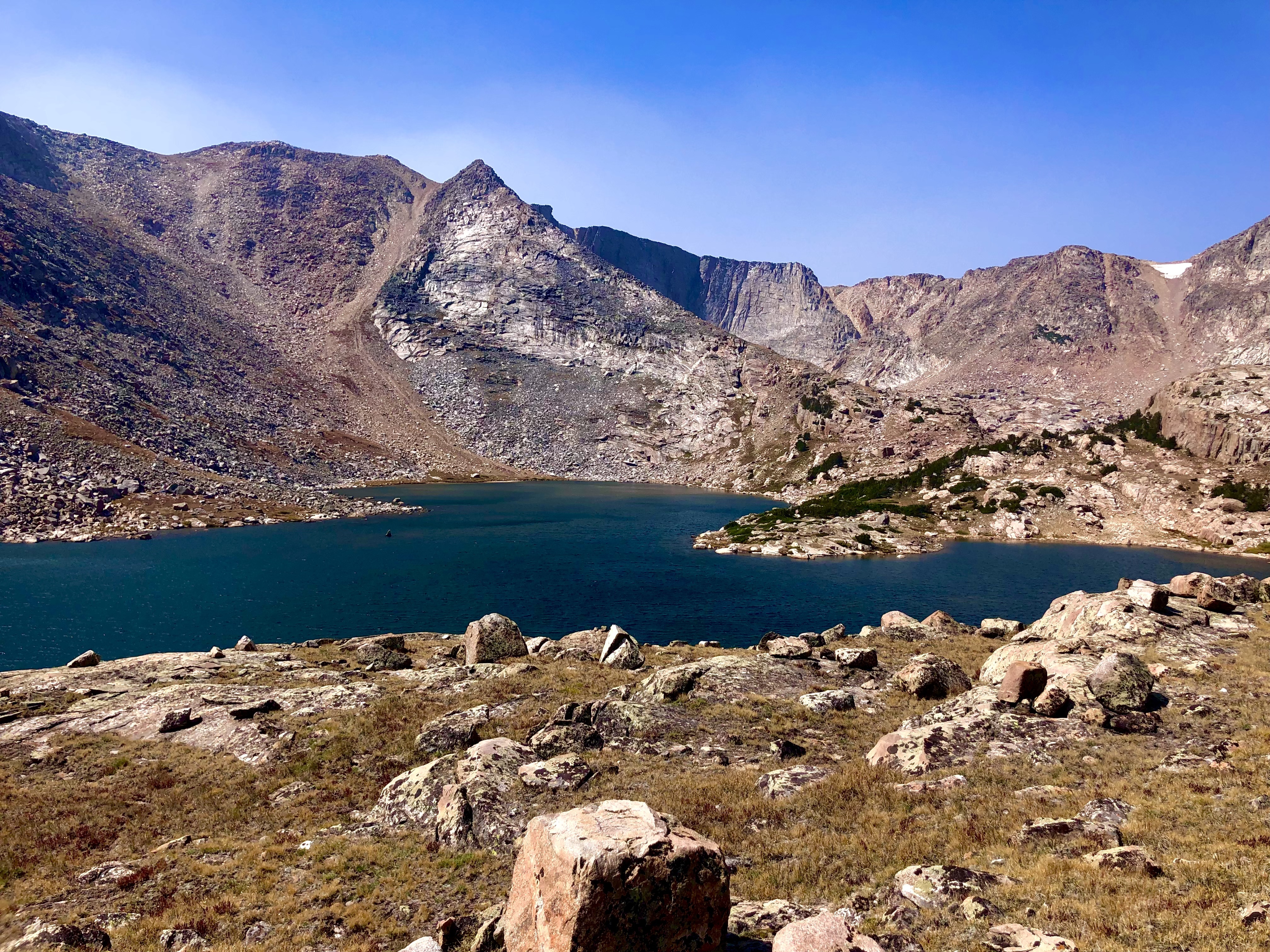 We quickly found goldens on a transition between a sandy shallows, a deep drop off and a rocky area. 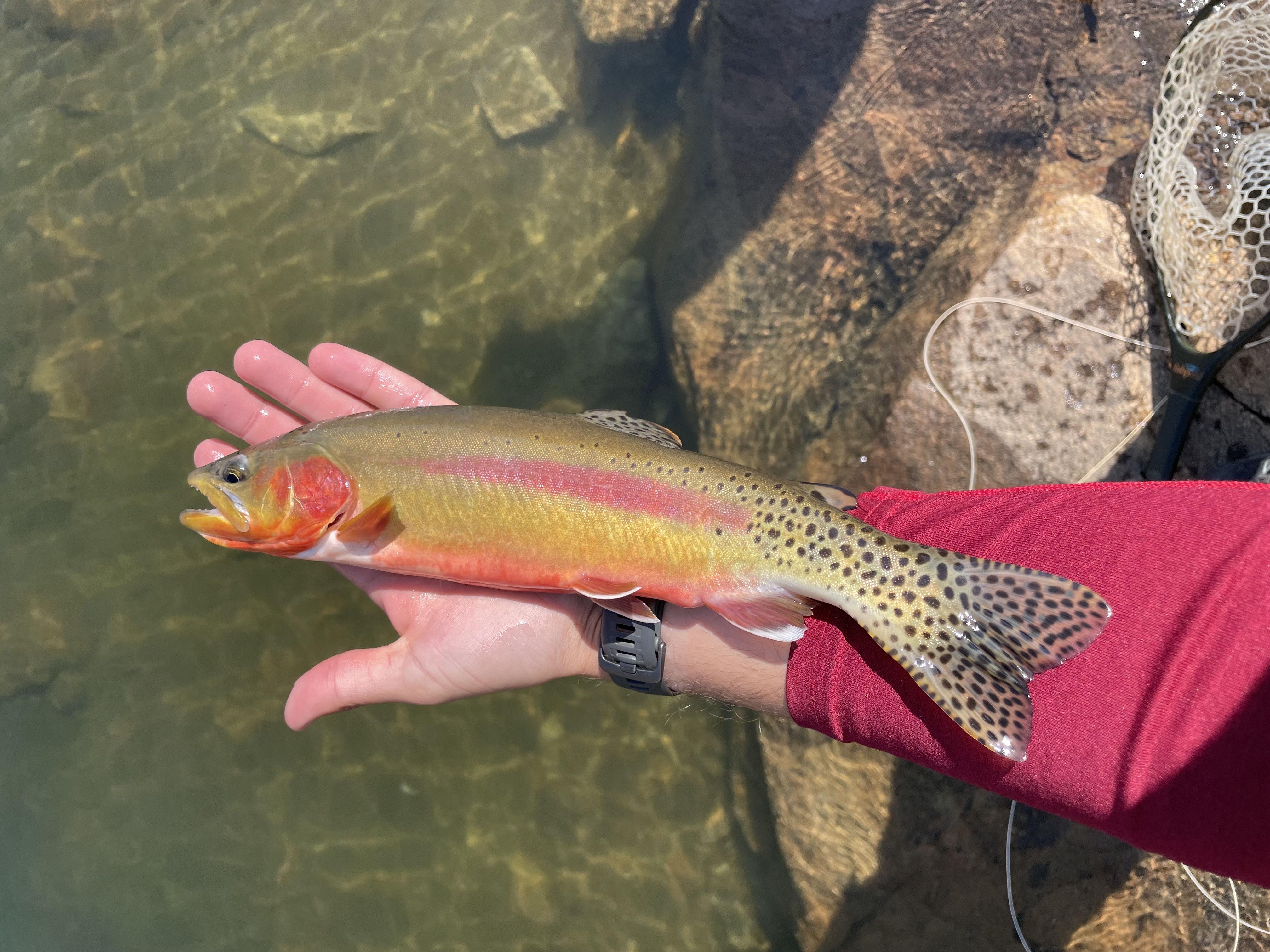 Eventually this spot began to slow down so we made our way around the perimeter of the lake. We found a sandy area with a steep drop off and I fished it with a leech on a sinking line. I netted several decent sized golden hens within a few minutes including this beauty. This spot slowed quickly, and the wind became very unfavorable to cast in, so we moved around the lake to a rocky point and cast with the wind at our backs. We caught dozens of goldens over the course of an hour or two with strikes on nearly every cast. The fish seemed to short strike more often than not, but the strikes were so frequent that the heart break of missed strikes was hardly noticeable in comparison to the netted fish. Though none of these fish were terribly long, they were quite stout. I'm interested to see how these fish will look in a few more years. The fish were also quite toothy. My flies deteriorated much quicker than normal, but as the flies became more sparse, the bites became more frequent. By the time I was through for the day, the leech I was using looked more like a barehook with a couple of strands of flashabou on it. For our last night, we camped on a shallow lake full of vegetation, below the tree line and caught some beautiful 16-18" cutthroats on leeches, nymphs and dries. 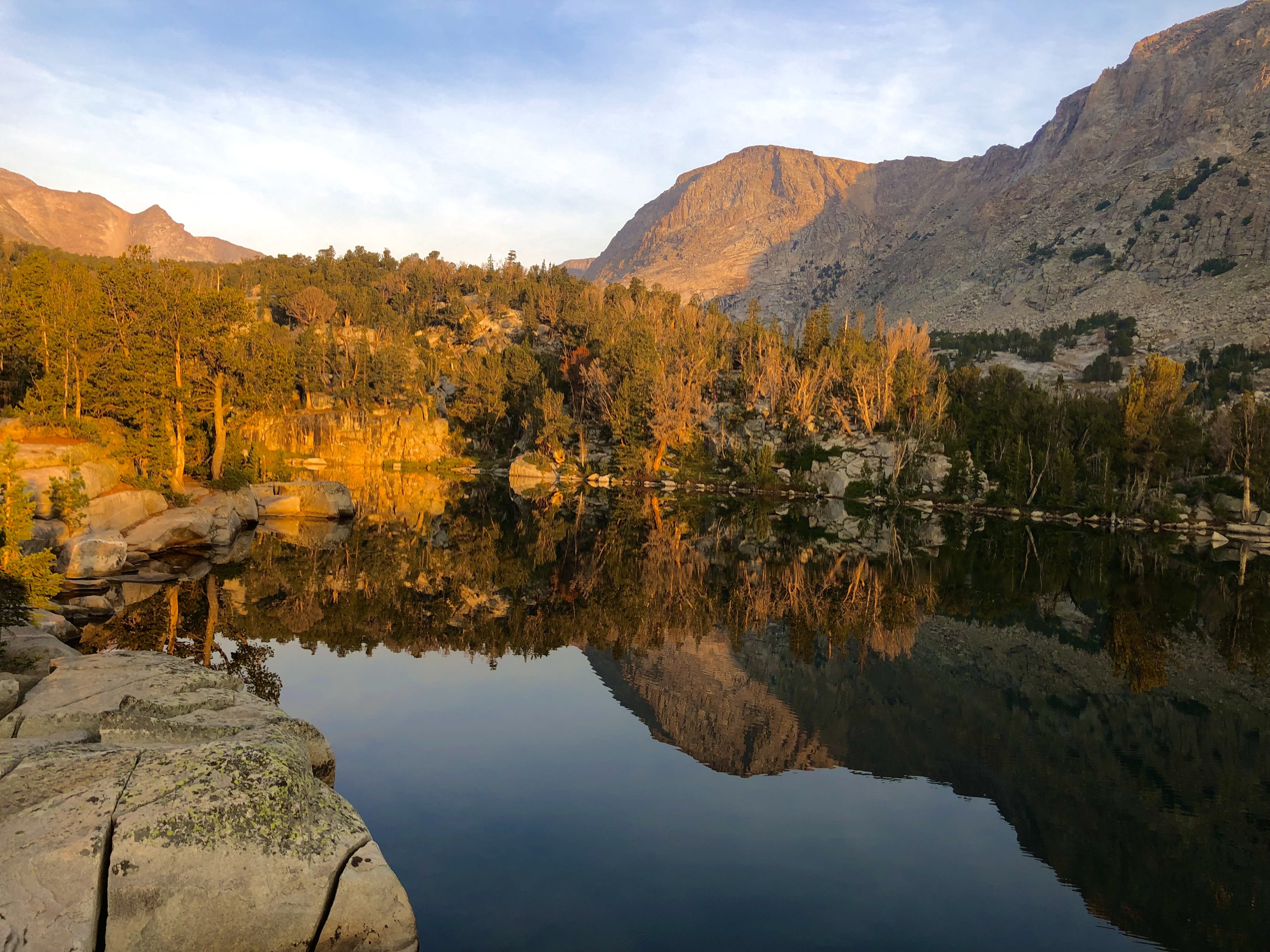 Great trip report complete with wonderful pictures. Those are some beautiful fish!

Beautiful photos. Thanks for sharing.

Great days there man. Nice work and glad you had a blast.