I don't understand your question or point.
G

Ard said:
I don't understand your question or point.
Click to expand...

I’m assuming the OP is looking for a new or different topic to discuss Ard .

I guess I wasn’t very clear Ard, I edited my post. Just wondering if anybody has some bamboo fishing stories, new rods or whatever?? I’ve been fishing different lakes around Washington with bamboo between nasty smoke and Covid.....

Nothing recent but for the sake of providing fuel I'll post this.

I use longer rods made from graphite now but back in the day I caught a lot of salmon on that 1964 Orvis Light Salmon #8 rod. I have the graphite model also that came out around 1980. My graphite is the nine foot six inch #8 rod which like the bamboo rod has both the 4" and 1 7/8" bottom corks. These were the original switch rods I think. You could cast overhead like a dream with the rods or when faced with limited back cast space they make great mini Spey casters. I don't believe I'd be telling tales if I said that I may have caught close to 100 salmon on that old bamboo and many in heavy currents to go along with their weight.

I've posted the image before when folks have ask about the durability of old cane rods. I think the picture may be from 2008 ad the fly was a gift from a forum member. It is just a simple pink and white marabou affair but that day it caught a bunch of fish. The two dead fish were taken at days end. That's how good it was here a dozen years ago, you could C&R all day then decide to take a couple......................

I have some other dead fish photos from back then when I was busy proving that you could get sockeye to take a fly on the swing but this is about bamboo so I'll leave it with the old Orvis. I bought that one as a used rod in 2005 but also have two that I ordered as custom builds back in the 20th century. I've accidentally caught Silvers on the 3 weight bamboo flea rod too but it was a lot more stressful than using the heavy rod. It happens a lot here in the fall, you're trout fishing a small stream and swing a streamer into a deep spot where you can't see the salmon. If you're on the ball you'll see them move toward the fly and you whip it out quick. I've had to retrieve a lot of flies from bushes because of that............. Every now and then one goes and gets itself hooked and then the game begins. The game is to keep that 6 to 12 pound fish calm and slowly pull it into some quiet spot then flop a net over it. If it were to go nuts you'd have to break the leader so the weight doesn't damage the rod.

I use this one on small streams too.

It's an 8 foot six weight and that fly is an example of why I don't like to have to break a fish off. I find it best to move with them (salmon) if you get tangled up with one and get them into some quiet water. The six weight will handle a ten pounder I'm sure but I haven't caught anything that large with it. I could try but with all the 2 hand rods I have I use them when I know there are salmon in the water. I haven't had that six weight out since last August when I did a grayling trip, seems a shame but that's how it is. I'll never sell them even though they see little use. The biggest reason for keeping them is that many people would like to have one but want one cheap. I took care of my rods like babies for all these years and they are worth what I paid for them even today. I've read where people say the Orvis rods don't measure up to modern builds but I'm not too fussy. When I was a kid in the mountains of Pennsylvania I'd never heard of a garrison bamboo. The benchmark rods in the 1970's in my area were Leonard and Orvis. It took until the 1990's until I could afford bamboo rods and back then getting one made to order from Ron White at Orvis was a big deal so I got two while the getting was good.

I'm not exactly at the end of my fishing years but I am surrounded by fly rods. I've sold some through the years but I think there's still close to 35 or 40 around here somewhere......... Probably won't get many more single hand rods, even if I moved south which I don't see coming, I'd have enough to last till I die. I actually have a 3 year old Sage Foundation 5 weight with a cool Sage Click reel that I've never even used. Guess I ought to go grayling fishing again soon......

I know this thread was about bamboo but I'm typing now so here's some more. I'm giving the river a rest for another day. I was out over the weekend and found plenty of water, more than is good for my style of fishing. Not just high but plenty of dirt and leaves with the occasional log or tree limb floating down. You can probably get the idea from that.

This rod was made by JW Bradley. 7.5 5wt Perfectionist taper. When I bought this rod I went from his house to the pond next to the high school at caught this sunfish.

Now that’s what we’re talking about guys! Great post Ard and nice rods, both of you!

On the topic of bamboo, I did have my eye on a Kagerow on Per Brandin's site but thankfully it sold. I was going to treat myself to a 66th birthday gift. I need another rod like I need another hole in my head. The rod is from a Japanese maker. The Japanese are producing some very nice rods these days.

When my father in law came back from being part of the occupation of Japan at the end of WWII he brought his father a bamboo fly rod in a nice, sliding-top box. His father was a bait fisher and said “I don’t want that” so my father in law took it home. I saw it the first time in the mid-70s, it still looked brand new, I don’t think it had ever been put together. I saw it several other times over the years. When he went to a nursing home in the early 2000s the rod disappeared. Sure wish I had it now!

My father bought a South Bend bamboo rod after WWII. I never saw him fish with it, even after he bought me a fiberglass fly rod. The rod and reel were in a cloth sectioned sleeve. It was kept in his closet then migrated to a garage shelf. He gave it to me in the mid-70s. Some of the finish was peeling and the wrapping on a few guides were gone. It lived in my attics until about a week ago. The sleeve is completely rotted away, the reel is locked up and most of the guides are gone or loose. I plan to clean it up and make it a wall hanger. It has 4 pieces, 2 top sections. The reel is a Martin Mohawk Automatic. The rod is a South Bend 59-9’.

Any advice on how to clean it up and replace/rewrap the guides would be appreciated.

Hi Txbart,
Your dad’s rod is a good fishing stick. I’ve redone several 59-9’s. Do you build rods? It’s hard to get exact color matches on the thread wraps if you want to keep it original. If you’re going to wall hang it, maybe leave it as is. Might have to be in a man cave or shop....the wife wouldn’t let me hang one in our living room!

Bambooflyguy said:
Hi Txbart,
Your dad’s rod is a good fishing stick. I’ve redone several 59-9’s. Do you build rods? It’s hard to get exact color matches on the thread wraps if you want to keep it original. If you’re going to wall hang it, maybe leave it as is. Might have to be in a man cave or shop....the wife wouldn’t let me hang one in our living room!
Click to expand...

Thanks for the response. I don’t build rods. I wouldn’t intend fishing with it so I may just clean it up, preserving the decals, rub some tung oil on it and figure out how to hang it. My wife calls my home office my “I love me” room since I retired so I can find a place in there to hang it.
W

Some more eye candy with a Colorado theme. A Jenkins GA 75 - 7'6" 3/2 for a 4 or 5 (I prefer a 5). My understanding is that it was built in the early 90s and that both Charlie and Steve worked on this one. The pics below don't do it justice. I pair it with a Hardy Golden Prince.

There's been a few of us in the Seychelles and environs using bamboo for saltwater species for a few years now, specifically T and T Sextants. The reasons are partly nostalgic but they are not the traditional 'soft' rods and have a surprising amount of backbone. It takes a few casts to reset your timing after using fast carbon rods but competent fly fishermen adapt pretty quickly. We've caught everything from bonefish to marlin on them. 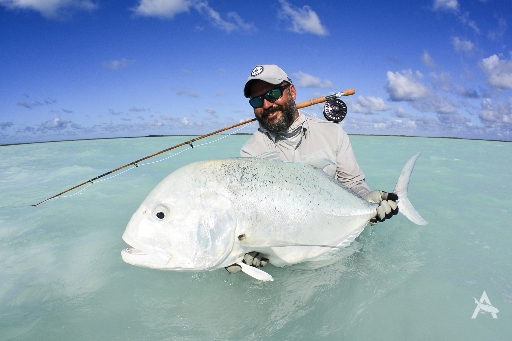 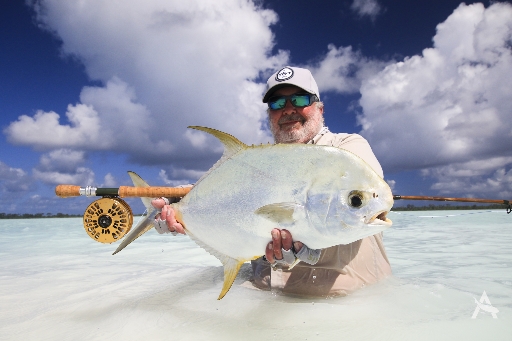 Sent from my VOG-L29 using Tapatalk

A beauty from the bench of Dave Norling of Minneapolis. Photo taken on Armstrong Spring Creek. Norling rods are few and far between. They don't appear on the secondary market. I was forutnate to have Dave build this for me and even more fortunate to have him as a friend. The rod handles a WF5 nicely.

Something strange brewing in the shop......

Here's a couple bamboo LM bass my friend Chuck landed. He builds bamboo rods from scratch. He gifted me one of his creations that casts like a dream, a 7'8" 6 weight. I fished it yesterday and landed a couple topwater fish. I decided I'm going to use that rod for the remainder of my bass fishing pursuits this fall.

The bass in the lower picture was in the 5 1/2 to 6 pound class. It put a mild set in the butt section of his fly rod. I asked him if he was going to straighten it out, he said no, now it's experienced!

Here's something I want to add for anyone struggling with getting nickel silver rod ferrules apart, myself having hand issues I really had a problem with it. Best way to put it is use a 1/10th of a smear on the male and female and wipe off any excess. I apply mine with a q-tip. This made a world of difference and the ferrules did not slip and came apart without me ripping another guide off the tip section.

Hope it helps somebody out.