Where they put the combat into combat fishing

I've seen worse at Montauk State Park over by Salem .

Wait for it, it's still early

I looked at the footage from around the opening siren. It was the usual shoulder to shoulder. Truth is, opening day is as much a social event as it is a fishing event.

Later, it thinned out considerably and it was definitely fishable for a fly rodder.

Have you ever seen when the salmon run on the Russian/Kenai? Holy wow Batman, I've never seen anything else like it. 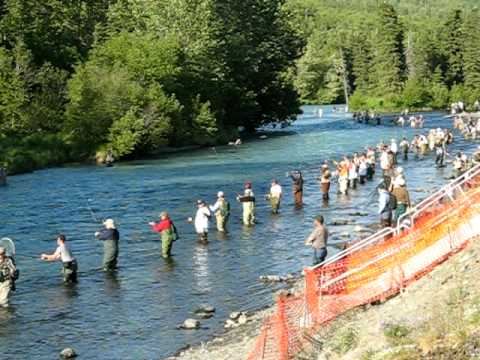 And don't forget about the (not-so) Great Lakes

I just can't imagine why these fisheries suffer after years of this.

In addition, I can't imagine these being the only options for fly fishing but realize in some places it is. You have my sympathies!!
T

When I lived in RI, Olney Pond would be like that on opening day, and a week or two later might have only a handful of anglers. Opening days are big deals to some people who will only fish a few times a year after that. Many years I've gone to one the places that had super crowds on opening Saturday on the Wednesday after and found very few others there. That said Bennett Springs is the single most crowded place I've ever been on any summer weekend. The last time I was there (30? years ago) the fly rod guys were lining up to enter a long pool, making a cast or two, stepping down and repeating, so that a couple dozen anglers were in a moveing line between the get in point and the get out point. As I recall that was about waist deep water with a strong flow, the spring has an average daily flow of about one hundred million gallons. I made one pass, just so I could say I had and found another place to go.

I'm pretty sure I would be taking on another hobby if I ever came across something like that.

There's a lake here which opening day is crazy, has been for many years. I've done it too, mostly to say I did, haha.

After spending March 1sr weekend in a tent for two years we started fishing downstream . Pretty much just kayaks and us . I gave up fishing there in 78 but still went and floated diving the springs on the way down . One went 125 straight down and there was an opening we got though to come up inside that was grated . Took 3 tanks , one for decomp if needed . Was a grand old time .
M

Crowds like those shown above are utterly beyond my comprehension.
T

Town folks live like that all the time. They would feel lonely if they couldn't see or hear other people. What is amazing is that those people are having tons of fun and most all will catch fish.
The best part is they aren't trampling down the smallmouth waters.

trev said:
What is amazing is that those people are having tons of fun and most all will catch fish.
Click to expand...

It is amazing anyone catches anything in those spots lol. The fun part though...that's why I don't judge, I like seeing people have fun

I don't recall ever fishing on an opening day anywhere, but I used to go up to that Olney Pond every opening and just watch with a few other hardcore flyrodders as the cities converged on the shore like it was a shopping mall. I've never made it to the trout parks on opening but I imagine it's not much different. And as a RI biologist explained to me, those thousands of licenses sold for that one day never to be used again went a long way toward paying for the entire trout program.

trev said:
those thousands of licenses sold for that one day never to be used again went a long way toward paying for the entire trout program.
Click to expand...

At my local fishing club they call these fishermen the unfriendly nickname of 'investors' because they invest in the club by buying a permit/license for a year and never fish more then once a year.
T

Acheron said:
It is amazing anyone catches anything in those spots l
Click to expand...

I think the overall average take/kill in the parks is calculated at something like 2.5 trout per permit and the nightly stockings are determined by the number of permits sold at that park on that date in the previous year. There are also hundreds of trout released daily by anglers that don't keep fish, so numbers wise the catch ratio is better than the tailwaters that I've fished.
There probably is no better place to learn or to hone catching skills, the fresh fish are not shy of anything, not easily lined or put down; yet still have the instinctive "examine, decide to reject or taste- then spit or swallow" survival skills that any fish has. They aren't "easy" but the sheer numbers available makes some success likely. There are always a percentage of users that don't catch any. And there ae always some fish that become old by not being caught often.

But, looking at crowds like these and projecting the trampling damage to the environment where ever so many walk, it becomes obvious that we do not need to "grow the sport".
K

When I was younger, I was one of those idiots who would line up along the stream for opening day. I was too dumb to understand that I can come back in a week and have the stream to myself. The stream I fish now I go in the evenings when most of the googans have gone home. I will probably go opening day around dinner time this year and hopefully get in a couple casts before the sun goes down. If its too crowded, I just go back another day. The stream I regularly fish gets hammered all the time but the fly rodders are few and far between.

I would not call them idiots. Everyone has their own definition of fun and fishing and available resources.

I think it is strange that people who live to fly fish for trout don’t live where trout thrive naturally. Jobs and family are big factors. People also like to rub elbows with like minded folks and it looks like you really get that opportunity with this type of location.

Assuming people cannot learn correctly overtime as they develop and saying we should close the door on new anglers is closed minded and does no good. Let folks go through their progression and decide for themselves whether they like it and want to make it a lifelong pursuit.

I cannot imagine if my new daughter-in-law who comes from an upbringing that is different than those who have spent time in the outdoors asked if she could learn how to fly fish and I said no we already have enough people doing it and you will just trash the waters. Yuk.
T