I’m looking for people’s opinions on the best location in the world for brookies? I’ve heard they grow enormous in some Patagonian lakes and also in their native range of Canada, in Labrador and Ontario. The sheer scale of the areas in question makes planning a trip intimidating, not to mention the expense involved! It’ll no doubt be a once in a lifetime trip so I want to plan it well.

If anyone has information on Lodges or even DIY information I’d be massively appreciative! A week or two in the Labrador wilderness fishing untouched streams for monster brook trout is my idea of fishing Nirvana.

Thanks in advance for any information you guys can can share.

Are you familiar with Don Bastain, the wet fly authority from PA ? 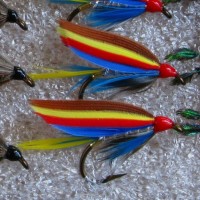 donbastianwetflies.com
Here's a few pictures of Don, his brother Larry, and niece Emily with some brook trout from a western Maine river
I've fish the same river many times and I've done okay, but not like that.
This is where I stay . https://www.blackbrookcove.com/
There are better campgrounds around, but this one is closest.

That looks awesome and more accessible than somewhere like Labrador as I can drive up from where my cousins live in Massachusetts when I visit. Thanks for the reply!

I don't mean to scoff but those aren't truly 'Big' Brook trout, those are nice brook trout but not what your original post was aiming at. I always wanted to go to the Goose Bay region of Labrador to Brook Trout fish but never made it farther than Newfoundland. There are opportunities on Newfoundland and on Prince Edward's Island to fish Salter's that will be considerably larger than stream bound Brookies but sorting out large ones is not a guaranteed task.

Although I am posting this reply to you I haven't been to the Canadian Maritime Provinces since 1984 & 85 so any experiences I can relate are quite old. I did however focus on the species for many years and in 1998 found what was then a new publication dedicated to these beautiful fish simply titled Brook Trout by Nick Karas. If you are planning a Brook Trout trip I can highly recommend that book. It is a cover to cover history of the species and after reading it you will be just like me....... Which is to say that you will know a whole lot more about Brook Trout than anyone who has not read the book. I'm the type who reads research compilations, although that may sound boring I've found it to be the best way to pack a lifetimes worth of learning into a very short time frame. In the book Karas informs the reader with a fairly complete history of the species in North America as well as their distribution. Things change, this is 2020 not the late 90's but much of the contents of the book are still applicable.

Honestly though, if this is truly a once in a life thing as you said I would look to Labrador and go there. I'd also shoot for at least 7 complete days of fishing because a place like that is going to be a real experience. Seriously though, get that book for yourself and if it is not as good and as interesting as I am saying it will be than please say so right here on this thread, I thought it was fascinating. I'd have never dreamed the things I found between those pages and by the way, I went to Carmen's River in 1999 just because I wanted to see it.

I would suspect that Labrador is somewhat like Alaska in that you will need to go deeper than where there is a road system to find what you want and I think what you want are 3 to 5 pound Brook Trout. With that in mind I'd start banking the funding and plan to spend if you really want to do it. Maine is good but Maine has been pounded. That's not to say you can't catch nice Brookies there like the ones in the pictures Paul posted but I have caught them like that in Pennsylvania. Anywhere that they have food and conditions for growth you may catch a big one but the place I keep mentioning (Labrador) because they have a history of being big there.
Last edited: Jun 18, 2020
S

Yeah I suppose a once in a lifetime trip should pull all the stops out! The Maine brookies are an option when I visit family over there. I’ve found a few places that look interesting such as igloo lake, northern lights lodge and also coopers Minipi lodge. I feel as though Labrador is maybe less explored and changed by man than the likes of Ontario where the Nipigon river was dammed etc.

This article although old really inspires me to go on an adventure and try to fish places that have never seen folk from a lodge!

Field and Stream Adventure: The Search for the Best Brook Trout Spot on Earth

This doesn't feel like fishing. For the hundredth time in the last two hours I lunge against a makeshift harness, jury-rigged from climbing rope and knotted around my chest. The canoe screeches through black spruce trees and lichen-covered boulders. I take three steps on firm ground and then...

Either way I’ll start filling the coffers in anticipation for the trip, I’ve already told my fiancé that it’ll be before we get married (because the wedding will cost enough!) and before we have kids so in the next couple of years.

Many thanks for your reply.
M

I caught some really large brook trout(4-6 lb range) on the border of quebec and labrador back in 05, I was there on a caribou hunt and the fishing
was better than the hunting. I brought spinning gear with me for the trip and the fish were not leader shy, or easy to spook at all
they would hit almost anything , the lakes were full of lake trout also. it was a great area to fish. we flew from montreal to cheferville then took a float plane to the lake. that trip is too expensive for me to go on now, but what a great area to fish
I was there in september, we had snow, rain, sun, then wind almost every hour, drank water from the lake that tasted like snow
it was great throwing a 5" rapala into a small stream and having a big brook trout just crush it. it was a good adventure

Seriously though get that book, just knowing a lot about them will be worth the cover fee. Here in AK. we don't have Brook Trout, they are replaced by Dolly Varden Char or Arctic Char which are both relatives of the Brookie. A Dolly would be considered big when it would weigh 4 to 5 pounds so the game is pretty much the same when you seek to find a place with lots of 'big' ones.
S

I snagged a first edition for a tenner from Coch Y Bondhu books.

That place looks spectacular! Pricey but exactly what I had in mind! Small streams stuffed with trophy brookies sounds like great fun!
S

Wow! This place looks incredible! No availability for next season and possibly even 2022 so 2023 gives me a lot of time to come up with the pretty substantial funds required. I’m going to enquire and see if I can get waitlisted for a prime week in 2023.

I think you will be happy that you did it if you do. The only thing that took it (Labrador) off my list was where I've been living now for almost 16 years.

I wouldn't exlude the Nipigon River. Average fish when I was there was about 3-4lbs and we caught a couple pushing 7... If you have a boat then you are set for a diy trip, or camp/stay in a motel and hire a guide, either way it's pretty budget friendly. We camped on the river for a week and it was very wild, there are usually other boaters too but doesn't take away from the scenery or fishing as it is such a big river.

huronfly said:
I wouldn't exlude the Nipigon River. Average fish when I was there was about 3-4lbs and we caught a couple pushing 7... If you have a boat then you are set for a diy trip, or camp/stay in a motel and hire a guide, either way it's pretty budget friendly. We camped on the river for a week and it was very wild, there are usually other boaters too but doesn't take away from the scenery or fishing as it is such a big river.

That’s a gorgeous fish man, I’m travelling from the U.K. so the boat isn’t an option! As awesome as the three rivers lodge looks I wouldn’t be agains saving a few quid! I’ll do some research, if you know any decent guides or places to stay I’d appreciate it!
S

I’ve just been sent this, even if you have no interest in fishing Labrador it looks like the adventure of a lifetime. You’d probably still need deep pockets or funding though!
I

I've been to Igloo Lake several times. I've also fished the Quebec area several times. Igloo has more bang for your buck than others in my opinion. Great lodge, staff, and the camp record Brookie is a touch over 10lb's. They have their own float plane and the camp is very well cared for. I've had days there with 20 fish and all over 4lb's.
C

Ard said:
I did however focus on the species for many years and in 1998 found what was then a new publication dedicated to these beautiful fish simply titled Brook Trout by Nick Karas. If you are planning a Brook Trout trip I can highly recommend that book. It is a cover to cover history of the species and after reading it you will be just like me.......
Click to expand...

Got the book delivered a couple days ago. I'm 40-50 pages deep so far and wow it's an interesting book. Who would have thought world class brook trout fishing essentially in NYC and Long Island? Crazy. Very interesting so far so thanks for the recommendation. It's a biggie so it'll take a while to plow through it.
H

Here, watch this video, some of the brook trout they show would count as 'large' -

Tight loops guys seem to live the dream when it comes to fishing in North America! I also had the book delivered and it’s brilliant. Mine is a proof copy with a letter from the publisher requesting a review.
You must log in or register to reply here.
Share:
Facebook Twitter Reddit Pinterest Tumblr WhatsApp Email Link
Top