New to the board and didn't notice any bull trout pictures. Here to start it off for these awesome natives! These are a few little Bulls I caught last summer in Idaho, this summer I will be in Northern Montana where some real monsters live. My goal is a 25"+ Bull for the summer.

My first Idaho Bull Trout. All these Bulls were taken from a remote, unexpected, and Top Secret location.

Nice fish! Bull trout and dolly varden are the same fish are they not? I used to live in the west. Unfortunately I didn't fly fish then.

p.s.: Would you possibly edit your post and shift the photos to one on top of the other (simply by setting the cursor between them and hitting the enter key) so the thread shifts to a normal width? I'm really hoping more folks will post some Bull Trout photos, yet by having them side by side it makes all the text extend out as well. Thanks!

jonbo said:
Nice fish! Bull trout and dolly varden are the same fish are they not? I used to live in the west. Unfortunately I didn't fly fish then.
Click to expand...

They are not the same...they are from the same Genus but they are different species.

Are there places in the US where it is allowed to target Bull Trout?

I thought that there were not, so taking pictures would be frowned upon. My understanding is that immediate release of the accidentally caught Bull Trout was required.
C

When I lived in MT years ago, it was illegal. Now Montana has a 5 week season.... Idaho you are allowed to catch and release Bulls. But you can be held responsible for injury or death of fish....

Not sure about other states... They sure are fun to chase / catch / and land.

Big Streamers on a streamer leader... w/ Heavy tippet. Never caught a bull on a small fly. Back Country Summer time bulls are right around the corner.

Are there places in the US where it is allowed to target Bull Trout?

I thought that there were not, so taking pictures would be frowned upon. My understanding is that immediate release of the accidentally caught Bull Trout was required.
Click to expand...

In the Flathead area of NW Montana there is a bull trout season from the end of May to August 15. The season closes to prevent people from fishing them during the spawn.

In Idaho you are allowed to catch and release bull trout. I have a lot of respect for these fish and always use a barbless hook to make release easier on them.

Hardest part of fishing for bull trout is finding them. The place I discovered is an amazing backcountry creek with bull trout reaching upwards of 30" in length. Its a very special spot that I would put in my top 10 favorite places.

There are four bodies of water in Montana where it is legal to catch bull trout; The S Fork Flathead, Hungry Horse Reservoir (which is the end of the S. Fk), Swan Lake, and Lake Kookanusa. Only in Hungry Horse can one harvest a bull trout, and the limit is two -- per season.

Nice photos! I was considering my next trip out to the western U.S. also heading north into the mountain regions of Canada. It's something that has really peaked my interest.

Finally got some days off of work to explore rivers in my new home for the summer. I have been dead set on catching a 25" bull trout this year, the season is open, and I had been itching bad to go try my luck!

Within the first hour, I hooked and landed this 22" Bull

Extremely happy with the catch, I kept fishing and caught these. A 16" bull and a BIG streamer eating westslope cutty.

The next day I fished hard and landed these just before evening. The biggest was 31" and probably weighed 10lbs. The other two were 25" and 27".

Gobs of 10-12" cutthroat could be caught using a dry fly, every fifth cast seemed to produce a fish in good water. I stuck to fishing for bull trout pretty much the entire time though. I was throwing two 3oz streamers about 6 or 7" long, with three BB splitshot, and 5 feet of tungsten sinking tip spey line. Needles to say, casting that rig was physically difficult after a few hours.

I hooked into a Bull trout in a huge hole that must have weighed 15-20lbs. I fought him for about 5 mins and absolutely could not budge him out from 30ft with my seven weight and 15lb test. Guess I will be going back ASAP!

Bull trout are feeding hard right now! Just moved to Golden, BC and have been chasing late fall bullies.

Here's some pics of the piggies we've been getting the past three days.

As long as we don't get a deep freeze, I'll be chasing these toothy river wolves for the next couple weeks!
Want to catch more bull trout? Use the biggest flies you have….seriously. 7-inches is a snack for these guys. I caught a 5lb bull the other day that puked up a 12" Mountain Whitefish. My flies I'm chucking are 7-10" long and are based off UK Pike flies. I'm using 20lb mono leader, a 3ft T18 sink tip and a 10wt rod. Overkill? No, not at all. I want to get the fish in as soon as possible, take a quick pic, and get it back in the river. Even with a 10wt, these fish are fighting for close to 10-minutes. They are incredibly strong and clearly in very good shape.

East Or-ee-gon, last year. Not mine. 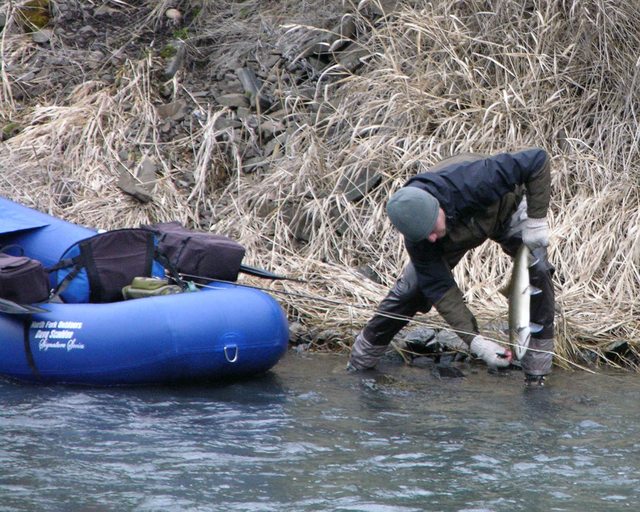 Nymphing on the south fork of the Boise and stumbled into this beauty.
M

Picked up a bunch of them on dries last year up to ~15" or so, chucked streamers all fall and only found browns. Saw a few though that were easily over 3' in length. 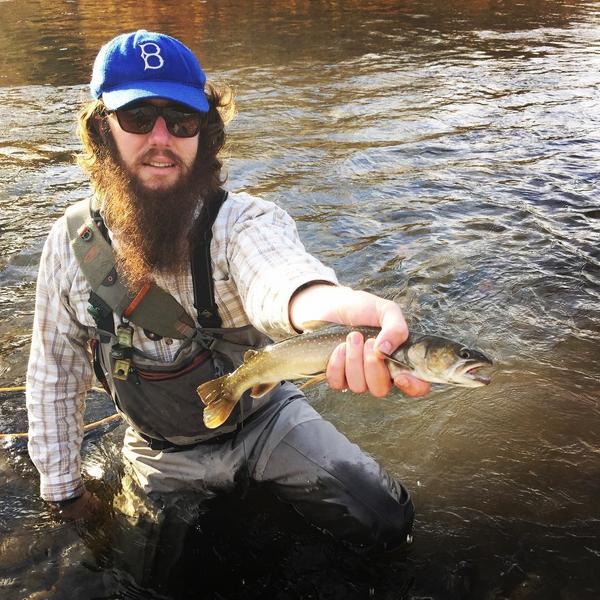 I was just fishing in several rivers in Crowsnest pass and could see some monsters lurking and harassing the Cutties...tried everything in my fly box...even went to streamers with sinking lines...they just looked at it! I estimate they were 30 inches plus!
W

I had the pleasure of watching a Bull Trout for some time today while out exploring and fishing. It was exciting to see since I've never seen one but know they are around this river I fish and another nearby. I can't fish for it legally. I video taped it but the turbulence in the water makes it hard to see at times but clear occasionally. I did catch a Rainbow in the vicinity and it swam into the pool where the Bull Trout was. I thought it was gonna get eaten so I quickly reeled it out of the pool towards me and released it.
You must log in or register to reply here.
Share:
Facebook Twitter Reddit Pinterest Tumblr WhatsApp Email Link
Top