I do not own any camo. When I hunted big game avidly, I did not wear any camo. I feel goofy in camo. When my daughter was young, she sometimes got camo clothing gifts, because people knew her father hunted and fished and wouldn't that be cute, but I was not going to get confused for a redneck by dressing my kid in camo and that stuff re-directed to Goodwill. I'm pretty stealthy though. Crept up on a carp the other while wearing an old orange R.E.M. concert tee. Me, not the carp.

Depends on what kind pf fishing I am doing and the conditions. Bottom line, if you can see the fish, generally they can see you.

I don't go as far as to wear camo but I will watch what I wear and try to stay in earth tones that are not too bright.
T

I think that if we are in the fish's window of above water vision we are too close to cast to that fish anyhow, so, it won't matter. I don't really believe fish are spooked by stuff 50'-100' feet away from them even under water, do you? even 20'?
From the fish's viewpoint of looking up, I guess sky blue or cloudy gray would be the camo colors that should be most effective?
Isn't belief that animals recognize clothing and reason that clothing is threat because anglers wear clothing indulging in anthropomorphism?
F

My only concession to camo is deer season, and then it's mainly a matter of a face mask that I use more to make sure a deer doesn't see a round face-a predator's face. A red bandanna would probable do just fine.

A few years ago, an outdoor writer shot a nice buck while wearing a Santa Claus suit. He would have probably done just as well dressed up like the Easter bunny or the Great Pumpkin.

I used to do a lot of hunting, so have always had plenty of camo clothing. I still keep a good bit of it around, because here in SC, I think it's the official state color!

I wear it because I have it, but for the most part I've worn it in places that I've fished to keep other people from knowing that I was fishing there. Stealth as has been said, has a lot more to do with how you move around than the color of clothing.

bigjim5589 said:
Stealth as has been said, has a lot more to do with how you move around than the color of clothing.

Hunting, I have stalked to within 30' of numerous deer and squirrels and had coyotes and foxes come within 15' of me all while wearing khaki pants and plaid shirts, often just from work on a construction site with all accompanying odors.. These animals have better vision than fish and are more aware of things at a distance, yet it is still motion and noise that alarms them.

I'm inspired to join this thread because I have recently been using a camo vest. Not because it is camo, I have been fishing near home and don't generally need my full on strap vest with contents to address any situation. Also it is longer and the old camo vest I excavated in one of my gear boxes is a shorty so I'm able to wade not getting fly boxes wet. When it was new I even painted some of my zingers black.

I am a believer in blending into my angling habitat with colors that blend with nature or in the salt with the sky. Also being cautions with my approach to quarry and aware of light angles and sheltering shadows. I will say though that for photographic purposes in the past I have had my models (fishing companions) wear some contrasting, even red shirts, and they have caught plenty of fish and big ones. I don't think fish are looking for us and regardless of color don't see us as long as we don't attract attention with sound and movement. My wife has thing for her pinkish orange Patagonia long bill, no problem. Still my instincts as an outdoorsman are to blend with my surroundings aesthetically. My hats are tan or olive.

But I have been wearing this camo vest, my longer regular strap vest hands beneath it and is olive.

I'll bet the best thing I could do is remove my studs for small stream fishing . Can't do that though. 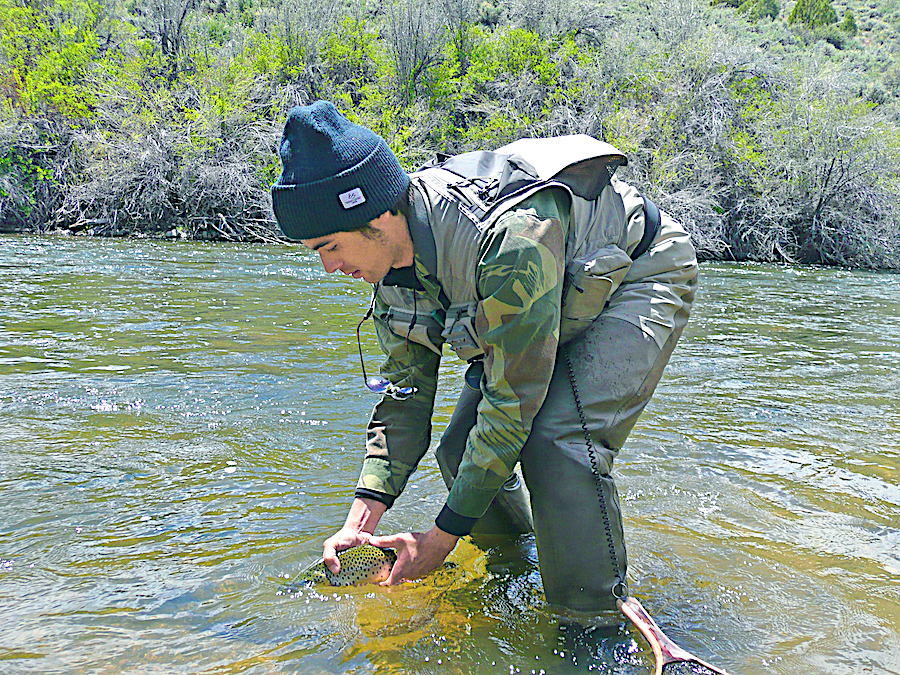 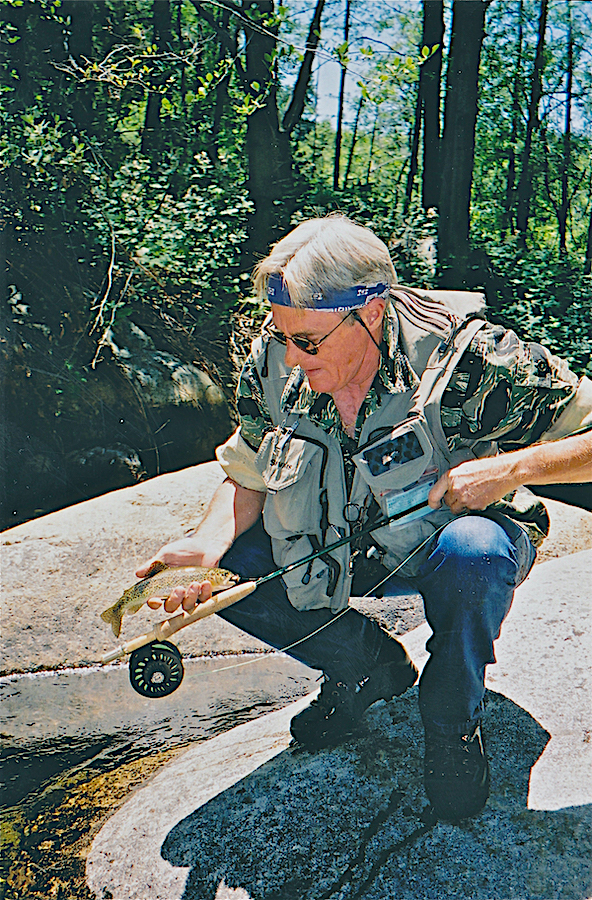 Wow, planettrout, even your rod you had painted blend-in green!

sweetandsalt said:
Wow, planettrout, even your rod you had painted blend-in green!
Click to expand...

They come that way from some guys up in Twin Bridges, MT...

I always wear a camo top with plaid pants. Rockin' the look!
D

Saw a guy once in a Fire engine red shirt and canary yellow trousers chasing Bonefish on a big clean Flat.I knew the Guide and chatted to him privately later.I asked him how he went with the client.He replied “Peter I think the fish were seeing him” which I took for a “No”.
The only sense better than a Bonefish’s smell is his eyesight.

Sometimes I'm in camo, but if I'm not, it's usually some kind of earth tone that will blend into my surroundings. Watching my shadow and being stealthy is important where I fish. I do a fair amount of casting from my knees. I think the fish are really keyed into movement no matter what your wearing.
T