I'll be up in Big Indian for a short mid-week trip during the first week of Oct. (my wife needs to fight a speeding ticket from July 4th). Crossing my fingers for even more improved conditions in 3 weeks. May also try to squeeze in a trip to the Housy in the next few weeks as well.
P

at last work and weather coincide. Heading over tomorrow morning for a quick visit.
L

I was at Esopus last Saturday. Fished at 3 spots. Did really well at a spot near Phoenecia. Later, I went to Woodland valley. There was a section of water that was tampered with by some people. They lined up really huge stones and formed a high un-passable dam (take it with a pinch of salt, it was unpassble at the current water flows). Nature would probably blow it out eventually, but I did my best to remove the stones. But man, the size of some of stones you'd need two people to move. Hopefully, there aren't more dams at other sections.

Later, I went to the cemetery section. The water was very murky. I tried hot spot nymphs before trying to swing streamers. Didn't manage to temp any trout there.

Overall, had a great time on this river!
P

Fished several spots on Esopus -- DIsneyland, Mt Tremper, Herdman Road. Lots of iso and stonefly shucks, trout were mostly ignoring them, even at the crack of dawn and at dusk. Very strange.

Water was not as cold as you might think. Green murky (as opposed to brown murky).

Managed a few rainbows and a couple of browns over the trip, but it was hard work and not what I was expecting. I think the river needs a serious barometric jerk to get the trout livened up some.

On the plus side there weren't too many mouse turds at the house and I didn't fall in.
S

glad you had fun. The Hous will be stocked soon
P

People are catching trout in the Hous, which is amazing to me after this long hot dry summer from hell
P

A quick trip Friday and Saturday, Oct. 10-11. Managed a couple of browns above the Portal and bupkis in the main river. It was very crowded Saturday.

I tried a little of everything.

Buddy got a couple of silver bullets on a little orange soft hackle.

Disappointing but the weather was glorious and I got a lot done around the house.

One more trip before I close it up.
J

Going to get my last trip in end of this week. Weather and water levels an look pretty conducive so hopefully can find some of those lurking browns.
G

Think conditions will hold up for a trip first week of Nov.? I was there in the middle of last week and landed a few browns and hooked a nice rainbow.
P

^ I'd say yes. Even if the flow is on the low side, the water is cold. I've had considerable success in late October-early November. Plus the chilly weather tends to discourage people.
G

Thanks. Hoping to hit up the Housy Saturday, but there's rain overnight so not sure how the water will be. We'll see.
J

Hit the E on Friday afternoon from 1-5p. Light drizzle and mid 50s kept almost everyone away which was fantastic!! Only saw one other fisherman in the entire stretch from chimney to the bridge. Nymphed for a while and caught quite a few rainbows in the 10" range. When the drizzle let up a bit, small olives would start popping and the little silver bullets would go crazy for 10-15 minutes, then go down until the next let up. I know they are not huge, but it was a lot of fun tying on a 18-20 BWO dry and picking off extremely aggressive and acrobatic 6-8" fish.

Nothing big and not a brown to be seen, but a lot of fun having the river practically to myself and, even in the rain, the foliage and setting was amazing.
P

I'm heading over for Wednesday and Thursday, and closing up the camp. (Sob.) I could theoretically let it go, but with the election looming I am going to be super-busy at the paper and I don't want the pipes to freeze, so...

Time to be realistic.
P

Well the weather and scenery were nice... 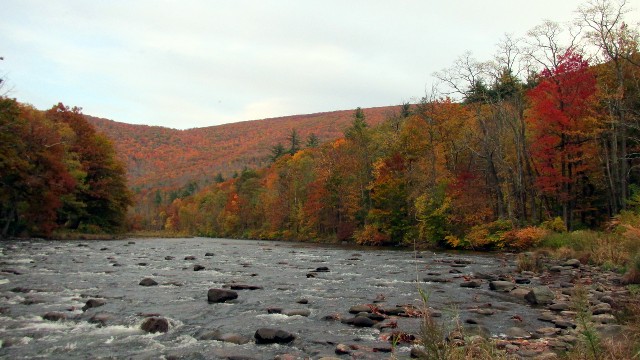 I managed a few browns above the portal and a few bows below but it was mighty slow. Lots of anglers out, especially at Disneyland.

On the plus side I moved the needle in my annual battle with specks. I tried Bozeman Flyworks x-rated fluoro tippet and got some results with the 6x and a size 22 Barr's emerger.

That's a wrap for the Esopus in 2020 I think, unless something dramatic happens. It's just far enough away (90 minutes) to make day trips unappealing.
P

New regs on the horizon for 2021, including:

Not settled yet but that seems to be the way it is going. All in all, good news if you prefer fishing for wild rainbows and wild-ish browns to hatchery browns.

The Ashokan reservoir will still be stocked so some of those fish will make their way upstream.
J

Very interesting. I definitely view this as good news. Hopefully the brown population can sustain.
P 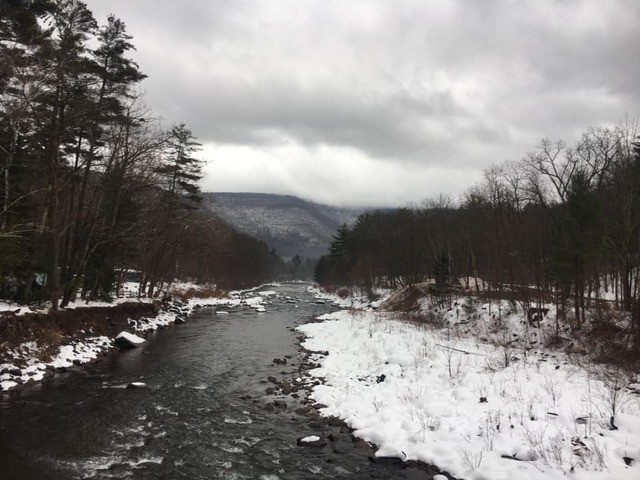 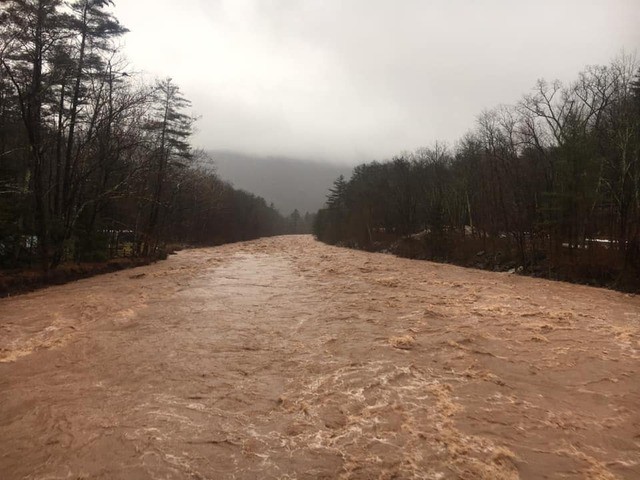 I thought that 40,000 cfs had to be a typo at first. Upstream of that bridge used to be one of my favorite places to fish as a kid....
and then walk the creek 6 miles all the way up to the Woodland Valley campsite fishing any public stretch or unposted section I could find. that was
fifty years ago. are the railroad tracks still there?
fond memories.
50 years ago with my wonderrod and medalist in hand

Some of the tracks are still there. A significant amount of track got washed out during Sandy.

It is common to walk along the tracks only to find them veering sharply toward the river and ending abruptly, with pieces sticking out in the air.

There is an outfit that runs a sort of pedal train from just west of the Emerson. I'm not sure how far they can go in either direction -- not very -- but if you're fishing at the access point on Rt 28 just west of Boiceville you'll see them trundling along.

Woodland Valley Creek has public access from the confluence with the Esopus upstream to the Muddy Brook bridge, and again just upstream from the Pantherkill Bridge. Then there is a stretch of two miles or so that is private but posted for fly-fishing only. I am part of a group that stocks this stretch on Memorial Day weekend and again in July. PM me for more details if you like.

Access to the Esopus in the reservoir permit area below Five Arches was greatly improved with the opening of the new rail trail, which runs more or less along the train bed from Boiceville east to Hurley. What used to require a fair bit of scrambling is now a relaxing saunter down to the new bridge that replaced the crumbling old railroad bridge. This area, with dedicated parking for anglers and a viable cell phone signal, was very popular in 2020, which had the beneficial side effect of less pressure upstream.
You must log in or register to reply here.
Share:
Facebook Twitter Reddit Pinterest Tumblr WhatsApp Email Link
Top