I have recounted elsewhere how I acquired a brand new Caddis High Sierra float tube for free, and how it has been collecting dust in my basement for a few years. Well, yesterday I used it for the first time. My daughter and her husband (it was nice to have two Sherpas) and I hiked up to Sterling Pond, a short but relatively gnarly climb. After considering various different options, I decided to carry the thing inflated, and was able to connect it to my backpack with some reusable zip ties and carabiners (it was real conversation starter with other folks we met on the trail). The only fins I have are my old ScubaPro Jetfins, which are pretty heavy and won't fit over wading boots. I tried a variety of different types of footwear, but ultimately just had to put the fins on over the waders with no boots. Fortunately there is a little small sandy entry area to the pond, so I don't think I did any damage to the waders. It was pretty clumsy getting in and out of the tube, and putting on and taking off the fins, but I managed to do it without hurting or embarrassing myself. It was pretty windy, but I didn't have much trouble steering the thing where I wanted to go and staying there; in that respect, for short distances anyway it has something of an advantage over the kayak (at least over a paddle kayak; I don't have a pedal kayak). I brought a four-weight fly rod and reel as well as a tenkara rod up to the pond, but I only used the tenkara rod.

Overall, it was pretty fun. I don't know if I want to lug it up that mountain again (though the tube itself isn't that heavy, my fins are, and a bunch of other crap I brought along since I didn't know what I would need, food water, jacket, sweat pants, etc.), but I may take it over to the local pond on days that I don't feel like dealing with the kayak. I do need to get a little more facile at getting in and out of the thing.

Oh, I didn't catch any fish yesterday. But it was still a fun day, a nice hike, and a stop for lunch in Stowe afterwards. 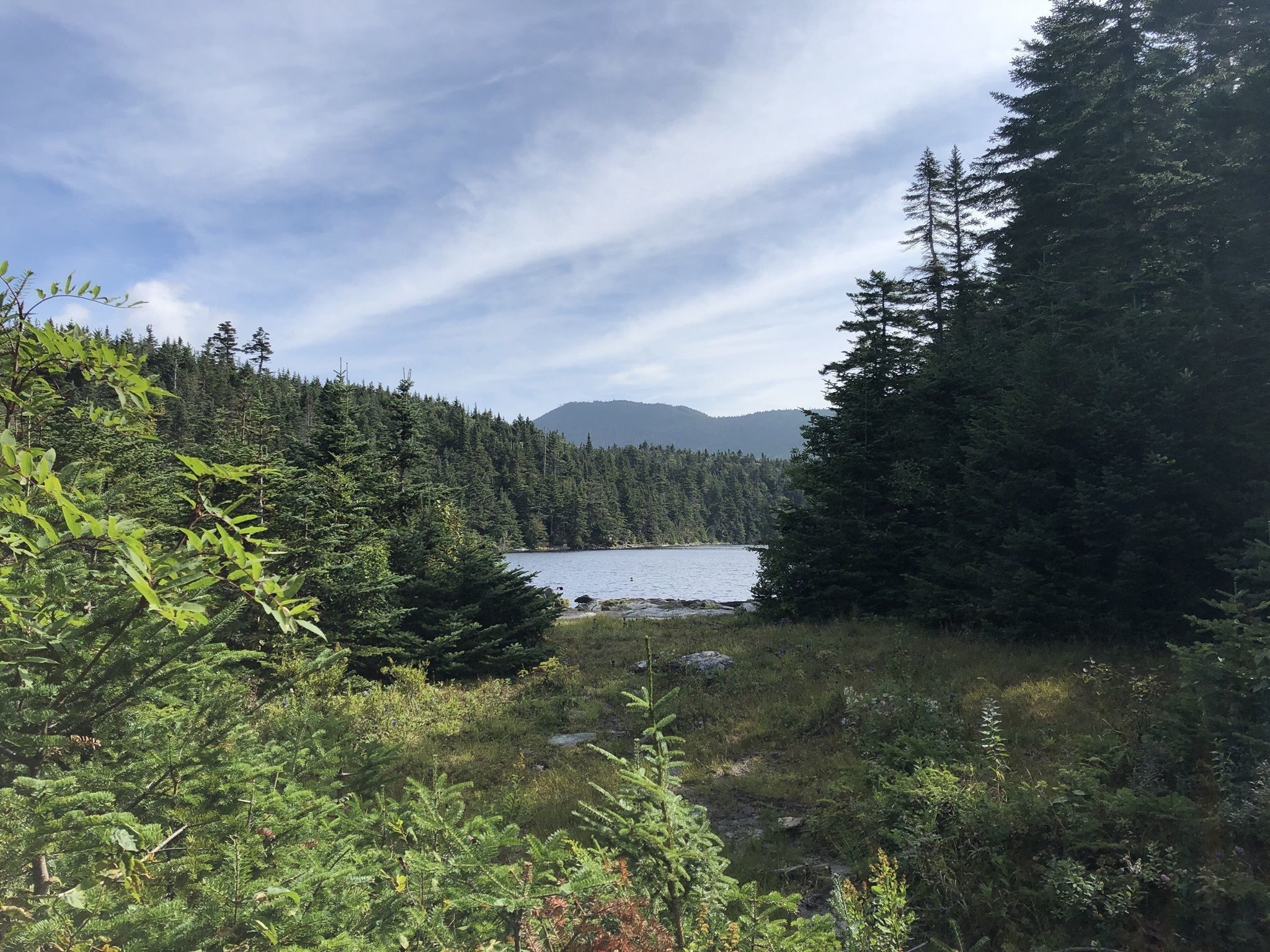 For Breathtaking Views Of The Green Mountains, Hike The Out-And-Back Sterling Pond Trail At Smuggler's Notch In Vermont

For gorgeous views and an idyllic pond, hike the Sterling Pond trail in Vermont this spring.

The getting in and out aspect becomes more important as you get older and less agile. I don't know if I would have more trouble putting on fins in the the tube or putting them on and stepping into a round or U-tube. Thinking about it makes me lean toward the idea of a sit-on type rather than a sit-in. And maybe those fins that fold up so you can walk in with them.

JoJer said:
The getting in and out aspect becomes more important as you get older and less agile. I don't know if I would have more trouble putting on fins in the the tube or putting them on and stepping into a round or U-tube. Thinking about it makes me lean toward the idea of a sit-on type rather than a sit-in. And maybe those fins that fold up so you can walk in with them.
Click to expand...

Yes, my 2nd time out in my tube I stumbled when trying to get up and out and did a full swan dive/face plant into the water. That was a cold and "sloshy" walk back to the car. What I failed to realize early on is that when the water is really cold, things don't straighten out as quickly as getting off the sofa at home!

Ever since, I crawfish it... put the fins on, use the tube as a stabilizer, and creep backwards to knee-deep water. Then I get in and snug up the straps one more time before kicking off. Reverse the process getting out.
S

Great post- I do a lot if walk in pond fishing and thus, I am an avid float tuber. U shape is best. easiest to get into. Crawfish style launch is best. Place tube in water with opening facing you.
Put on the fins and walk into the tube. Make sure to tether your gear- all of it. I use a rod tether that attached to back of reel and attach to your wrist.
Any gear like fly cases I attach to a zinger. Always wear a floatation device and check the air in the tube. cold deflates.
Sterling Pond is a special beauty.
PM if you want more float tube info- glad to help.
G

skunkedalot said:
. U shape is best. easiest to get into. Crawfish style launch is best. Place tube in water with opening facing you.
Put on the fins and walk into the tube.
Click to expand...

That makes sense. The tube I have is a round one. I waded out a little bit with my fins on; I have done a fair amount of scuba diving and maneuvering with fins on is not a problem, but the leg openings in the tube are just a little narrow for the width of my fins, so there was a little monkeying around to get into the thing. I have watched videos of fancy tubes that have basically a chair in them, you just sit down and put on your fins. I imagine they are a lot heavier than mine, but if I ever buy one that is the kind I would get, as long as I can park near the water. (The one I have I got for free from an acquaintance who had no use for it.)

I just sold my kayak. Too much trouble to store/haul etc. Is a float tube the way to go?

Ringneck16 said:
I just sold my kayak. Too much trouble to store/haul etc. Is a float tube the way to go?
Click to expand...

I prefer them greatly. I love being able to move/maneuver with my feet while having both hands free to fish. I get frustrated fly fishing in a canoe or kayak when I have to pick up and put down a paddle to make corrections from getting blown around by the wind, etc.

The downside to float tubes is the lack of ability to easily travel longer distances on the water. A "pontube" helps cover more water than a normal tube by having oars to row with, or even an electric trolling motor if you prefer.

I have an ultra-light tube for backpacking (Wilderness Lite Backpacker Pro), a heavy-duty V-tube (Outcast FatCat), and a pontube (Scadden Raptor Lite Speed X). The Backpacker Pro will fit in a daypack. The FatCat and Raptor fit in the back of my Subaru Forester.

I agree on the paddle hassle as it has tested my coordination and I came up lacking! I see they have pedals now on some kayaks, but man they are expensive. I appreciate the comments.
S

Float tube and Yak is a nice combination which is what I do. The tube for walk in ponds, the yak for larger water. Both give you access to water that a boat cannot.
B

Hi guys and gals, newbie here. I just bought a Cumberland float tube and tried it out fishing this week with some success. While I enjoyed the tube I could not figure how to turn right or left without using my hands. Could someone explain the procedure? Many thanks in advance!
S

Bassman, you make your turns using the fins. kick right to go right and left fin to go left- the other stays stationary. backwards require both fins.
pm if you need more info- glad to help.
tubing is fun and a great way to fish. Remember to tether your rods and stuff to the tube and it goes w/o saying- always wear a floatation device.
Good luck.
B

skunkedalot said:
Bassman, you make your turns using the fins. kick right to go right and left fin to go left- the other stays stationary. backwards require both fins.
pm if you need more info- glad to help.
tubing is fun and a great way to fish. Remember to tether your rods and stuff to the tube and it goes w/o saying- always wear a floatation device.
Good luck.
Click to expand...

Hey Skunkedalot, thanks so much for the advise as I had no idea how to make turns. I am in the process of ordering a pack of tethers for my rods and pliers, etc. and I have an auto inflatable PFD (I won't leave shore without it}. This looks like a great forum and I'm glad that I found it.
A

I've got to get one of these!

Aluminumchef said:
I've got to get one of these!
Click to expand...

Yes, it is a complete game-changer for fly fishing lakes or ponds. Just having room to cast opens your whole world up... not to mention the uninhibited access.

I love being a tuber, especially as I move on in age. For years I floated lakes and small rivers of the Pacific NW with a 9' pontoon. After which, I swore I'd never use a V tube again. Well, guess what? I retired my pontoon this year and relegated myself, yet again, to a new, no less, V tube (Cumberland). I found it arduous to put together the frame, pump up two huge 9' bladders, then take it all apart after 6 to 8 hours on the water. Health and fatigue are what motivated my decision. My pontoon gave 16 years of faithful service without a single hiccup! I guess you could say it outlasted me... what a buddy.

It's funny how the more things change, the more they stay the same. Life does a full circle eventually. I never paid much attention when I was actively working, it was not until I retired that I noticed how much my life had changed. But, no problem, I just made the necessary changes and, "bingo" I'm right back in the game enjoying the things I love. Also, float tubing stillwater is a great way to take the peril out of swift water fly fishing.

Covid is still creepy, but I plan to venture into Montana and beyond. I hope to see you out there!

This popular tube with fins has been a great buy at costco. $100 less than amazon.

I have both a tube and a kayak. The kayak is better for the muddy weedy places that bass tend to live. The tube is at home in the clear kettle ponds our local trout call home...
T

i fished a u-shaped tube for the first time a few weeks ago. it's definitely easier to get to the ponds with it in my backpack than a kayak is. i much prefer the kayak. sitting in water for two hours and then hiking out with a water-logged butt wasn't fun. plus, for me at least, only my chest and up is out of the water. that makes reading water and underwater features difficult. i don't plan on getting rid of the tube but I am researching ways to make it easier to get my small kayak to the same ponds.
S

Water log - wear chest waders. That is the ticket for staying dry.
T