Words and pictures by Paul Sharman

The superbly marked cheek of a large Cumbrian brown trout.

In a county better known for the copper mining history of the Lake District, it was in fact the stunning golden-bellied brown trout of the wild Cumbrian rivers that had drawn me north from my home in Sussex in early May.

The long slog up numerous motorways to go fly fishing is never fun when you live in the far south-east of the country as I do, but it was well worth it as soon as I turned off the M6 at the ‘South Lakes’ exit towards Newby Bridge. I could then start soaking up the spectacular Lakeland scenery as I headed up along the rugged tree-lined western shores of firstly Lake Windermere (England’s longest lake) and then Esthwaite Water, towards the popular hiking centres of Hawkshead (a beautiful little village by the way and well worth a visit) and the larger Ambleside at the top of Windermere. 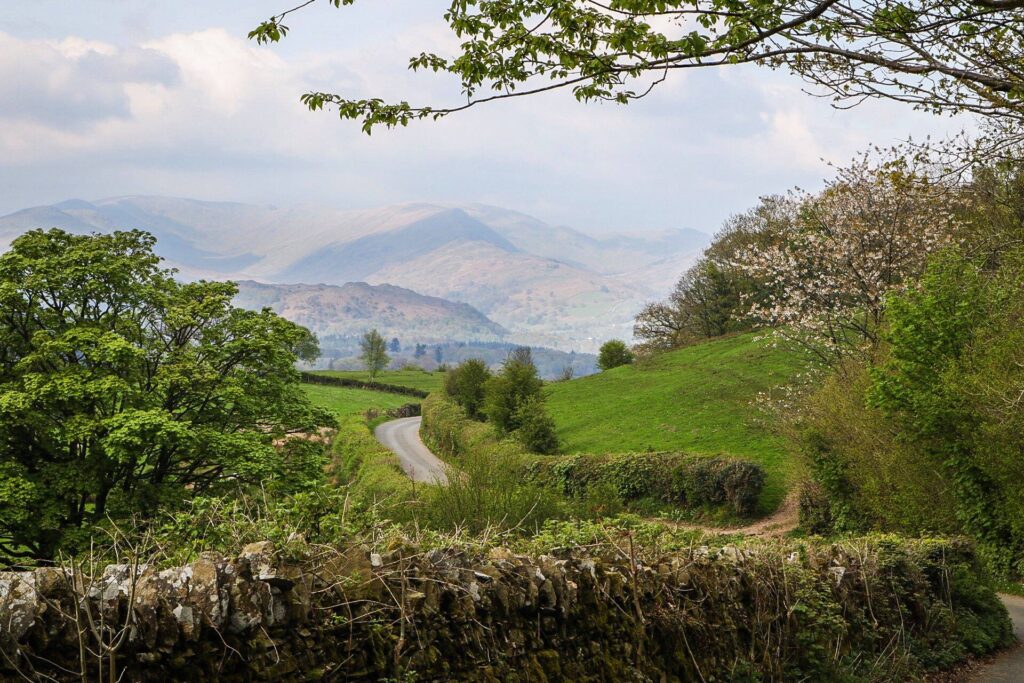 The view at High Wray near Hawkshead looking towards the Eastern Fells.

Wherever I lay my hat…

Hole House Cottage at High Wray, which I was to be calling home for a few days, was originally a small 17th century farmhouse and was given to the National Trust on 1st January 1947 by William Heelis as part of the bequest of his late wife, famous Lakes resident and children’s author Beatrix Potter (who played an important role in the early history of the National Trust herself.) A charming cottage in a beautiful location, it also has a wonderful 18th century stone bank barn attached that is home to nesting swallows, house martins and a pair of grey wagtails when I visited. These proceeded to entertain me endlessly, swooping over the meadow and my head, as I sat outside with my morning coffee soaking up the magnificent views over Blelham Tarn to the mountains of the Eastern Fells like Fairfield Peak and Seat Sandal beyond. 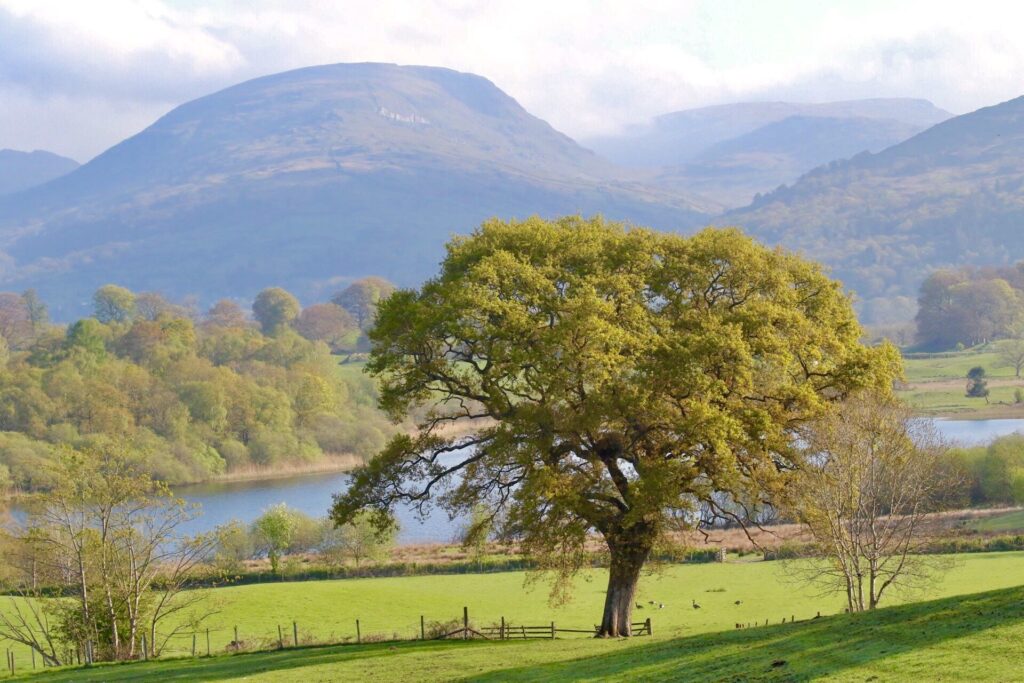 The bucolic view from Hole House Cottage over Blelham Tarn to the mountains and fells beyond. 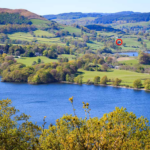 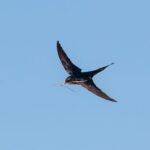 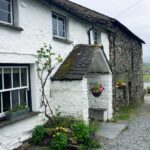 I had arranged to fish with that stalwart of English fly fishing, the respected guide, instructor, entomologist and author Paul Procter, himself a local Cumbrian lad. Now at this point dear reader I must tell you that I was sworn to secrecy as to exactly where we would be fishing, under threat of the local ‘gadgees’* (aka ‘Cumbrian Mafia’) descending upon me! What I can say is that the rivers we fished were available to the likes of you and I, and from what I know of the area from a previous visit, fish of great beauty and quality can be found all over the region – it must be something in the water!

Now if you follow Paul’s Facebook page as I do, you will already be familiar with the regular quality of fish photos he shares, not just in heft but also in beauty. These have to be some of the best looking brown trout in the country, and often at a size more usually associated with New Zealand than wild English rivers! I was therefore quite keen to study the man and the method and see if some of it rubbed off on me.

Dedication to the cause.

Our first day fishing it was obvious straight away that Paul is completely dedicated to the cause of seeking out only the best trout he can find in a river to target exclusively. We spent a lot of time initially observing, looking for rises, passing by obviously small fish and checking out the hatching flies to identify the specie. Only once a target fish had been selected would Paul very carefully position himself downstream and then literally crawl himself into place to make a cast as stealthily as possible. This was not made any easier thanks to the low water conditions after the dry winter and spring. The water was also gin clear so the fish were extra spooky, particularly in the shallower sections, making his approach even more vital. The cobbles can be painful so a pair of knee pads can be very handy.

Keeping low to the water, Paul Procter makes a cast.

We fished dry flies exclusively thanks to the main hatches of stoneflies and large brook duns sailing down the river, with a few others mixed in for good measure. While Paul targeted the big fish, when I wasn’t taking photos or watching I was happy enough to cast at any rises in front of me and just breath in the pure northern air. It’s hard to express the joy a clear-running freestone river can bring to those of us more used to the sluggish rivers of the south-east that wind their way slowly over the Wealden clay, so I was determined to enjoy every minute. 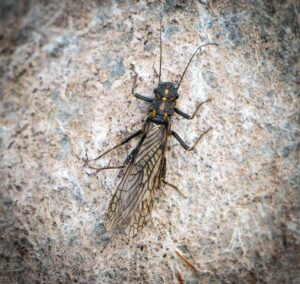 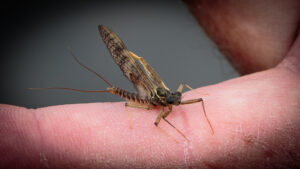 To the victor, belong the spoils.

We were seeing plenty of fish rising but only a handful Paul felt were worth a cast to. Eventually a small fish did interrupt the flow, leaping onto his fly that was quickly released so we decide to make a move downriver. Again we watched a few fish rising on a deeper glide whilst we reached into our backpacks for some sustenance around midday. Paul left me to have a go at them while he walked back upstream a little way to check out another section we had walked past.

With my fish proving unresponsive I walked up to find Paul in a battle with an obviously good-sized fish. The look of concentration on his face as he steered the as yet unseen trout away from snags and towards more open water told me this was worth getting the camera out ready for. I wasn’t wrong! 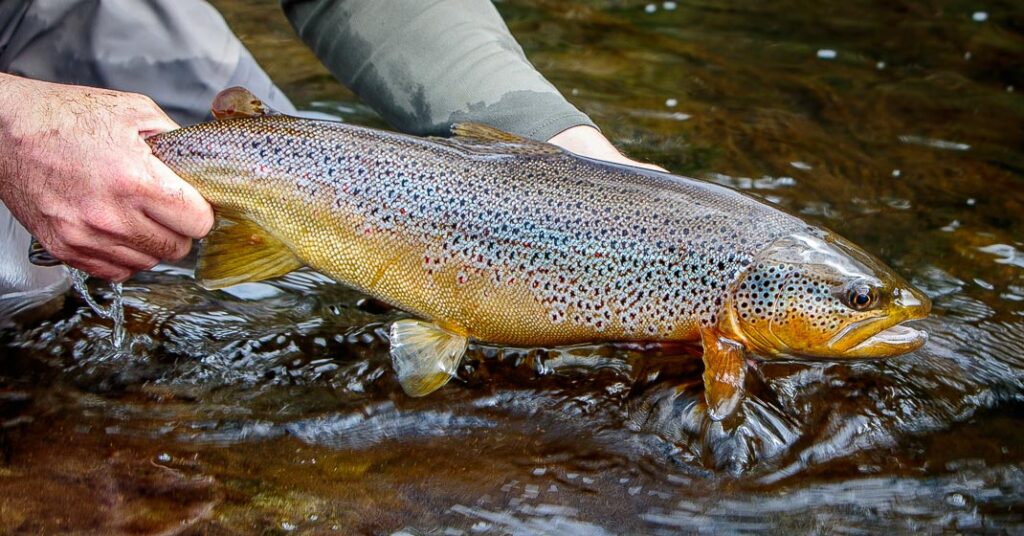 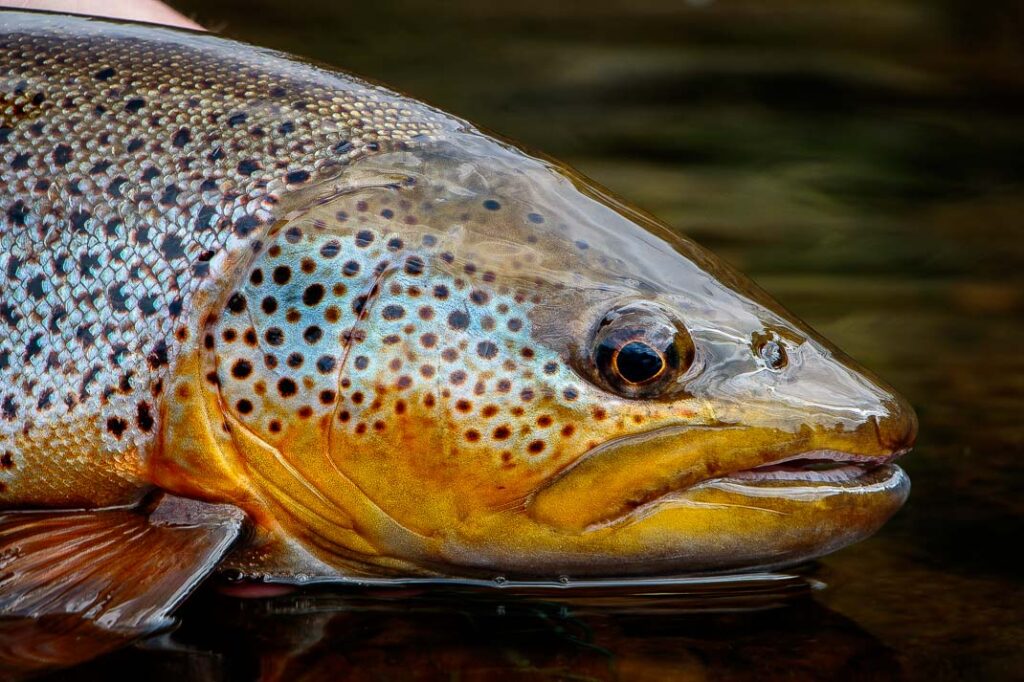 This is what I had come to see!

The absolute beauty of the fish was staggering up close, with the iridescent shades of turquoise and silver glinting on its cheek melding into that deep burnished gold. The flanks were littered with dark spots with a few red ones mixed in with more pure gold belly appearing the further down the body you went. It would be very hard to find a better looking brown trout anywhere in the world and Paul went on to record further catches that same day that equalled or perhaps even surpassed it every time. I had my chance to hook one of these beasts, but a fast splashy swipe at the fly from the protagonist in question wasn’t overly conducive to a successful hookup so it was not to be. However, this is what brought me to Cumbria in the first place and this is what will bring me back time and time again. Fly fishing can take you to some wonderful places.

I did eventually get one of better marked fish I was hoping myself for at a different location and river on our second day of fishing. As luck would have it of course Paul had gone upstream so I was left trying to get a decent shot of it in the net. You get the idea below – nowhere near as big and beautiful as Paul’s fish was but you can see the beginnings of that trademark gill plate iridescence starting to appear. Give it a year or two and it will be another superbly marked Cumbrian specimen brown trout to seek out with the fly rod. 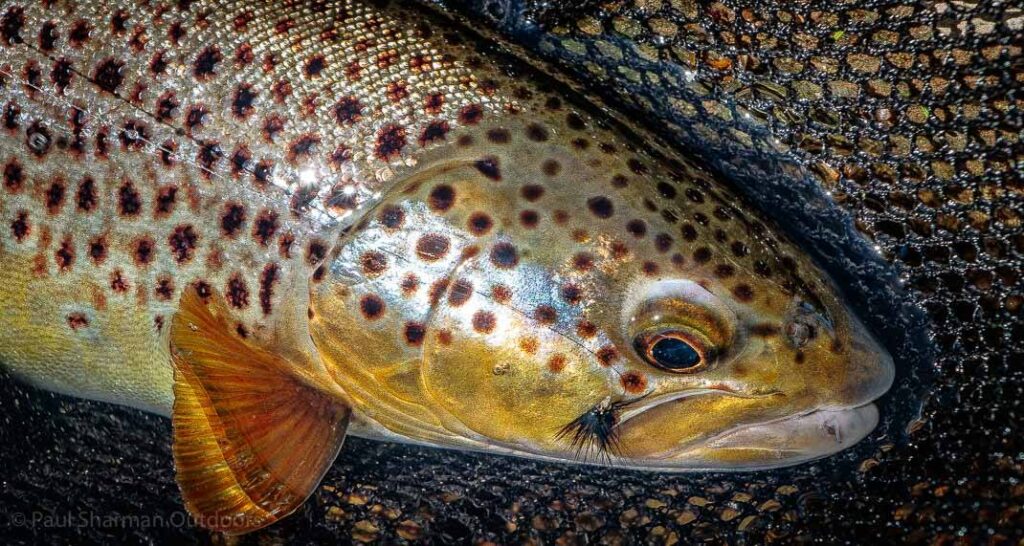 Accommodation by The Coppermines Lakes and Cottages

Super Cool trip report! I am more and more enamored by English and Irish flies and fly fishing, so this was right up my ally, so to speak.

Wow! Fantastic photos! That would be a dream vacation for me.

Thanks vamtnbiker - I'll share a couple more reports from over here as the season progresses.