After a couple days hunting on various river systems, I found myself wading near the river’s bank looking at the mucky water on the river’s shore. I was hours early and the day still hot, the sun had just reached the tops of the pines across from me which meant hours to go until anything (or maybe even nothing) happens. There were a few of the giant mayflies that I and many others have been eagerly anticipating clinging to the branches of the downed tree. This looked like a prime spot to wait.

The downed tree sat in the shallows, which also made it a convenient riverside bench. I put my 6wt down, spent the next few hours between standing to make a few casts, making leader adjustments, watching the river, and having brief conversations with fellow anglers as the drift boats passed on by.

As the sun descended and nighttime began, there was nothing but silence. Just the sound of the river flowing. Time passed, a good amount of time. I motionlessly stood there holding my rod in waist deep water, waiting for it.

Then, the surface erupted maybe 35 feet upstream. After a few drifts, the fish was briefly hooked, but become unbuttoned right away. That was unfortunately a poor hookset on a large brown. Things went quite for a few minutes after that. Then, I began to hear fish feeding slightly upstream, turned on my headlamp to check leader and tippet, and saw that the hatch was in full swing. Moments after turning on the lamp, I could see bugs everywhere. Giant mayflies were clinging to me. The famed Michigan Hex Hatch.

I waded upstream and was not fully content with my casting position to the fish, but there were multiple feeders and I just had to make the best of it. A few casts later I hooked a brown that was maybe 16’. Fought him to the net. Kept him in the water and released him quickly.

Without the logistic details of time and place, this has been a decent year for fly fishing Michigan. I hope other fellow fishermen have been finding good hatches with bend rods and tight lines.

As I reeled the fish in, two downstream anglers had determined that the hatch had “turned off,” and decided to walk back upstream to leave. The hatch was still active at the time, but had been going for a while so might have been tapering a little. However, it was not over. They waited for me to land the brown, but then walked right up through the feeding lane and stepped on my spot. They did the same thing to another angler who was upstream. They ignored my comments that the fish are feeding upstream right above where I am.

I am not complaining about that night, that brown was beautiful and the hatch was awesome. But I am slightly bothered and feeling a need to remind myself first and foremost that some anglers wait for events like the Hex Hatch all year. If someone wants to cut out early, that is fine. But it is good to remember etiquette and not step on someone else’s spot when departing, especially when they are fishing an active feeding lane. Walking directly through where the fish are feeding at spots people have been patiently sitting on is improper.
W

Nice report and glad you caught a nice brown. I've only done one hex trip and never hooked into a large brown, but I know what you mean by "eruptions". One time I was fishing upstream and a fish ate maybe 30' behind me. Sounded like an explosion and I nearly jumped out of my waders. Really disappointing that some show such poor etiquette, especially considering that many folks get to their spots 5-6 hours before the expected hatch. I guess you can wish they forgot their mosquito repellent.

Here's the hex pattern I use. I find that it hooks up with even the smaller fish because the pattern "folds" in half rather than being pushed away. I apologize to you in advance for the disappointment you will feel upon learning that this article is not about a hot new dance step from south of the border and will not contribute to your romantic relationships or skills on the dance floor.

Photo of a Hexagenia Limbata Dun 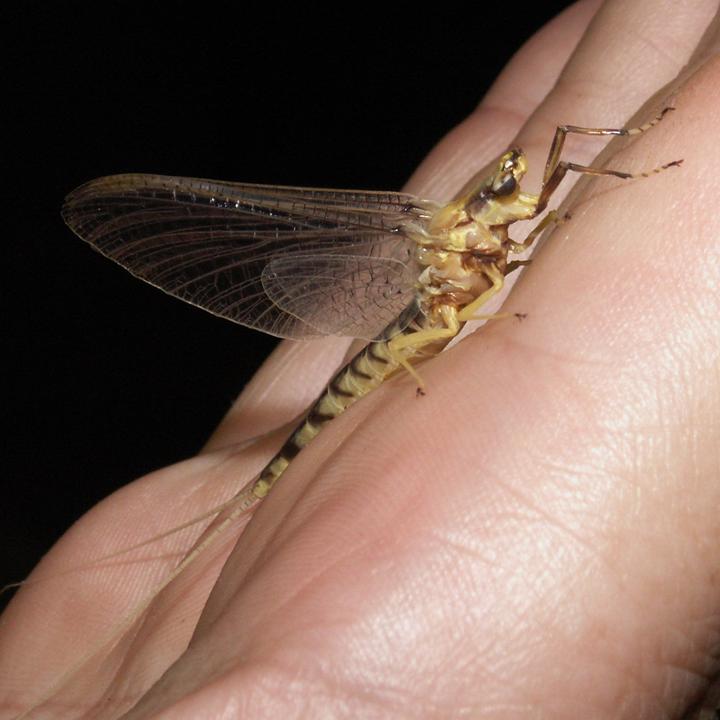 The Flex Hex is the best pattern for this hatch that I have been able to find and I've tried a number of them from traditional patterns tied on straight hooks to extended body patterns tied on shorter hooks. Both have problems hooking up on all takes.

The Flex Hex solves this problem by putting a mono to mono loop hinge in the middle of the pattern and even smaller fish can take in this pattern. It actually fold ups and offers less resistance than the natural. 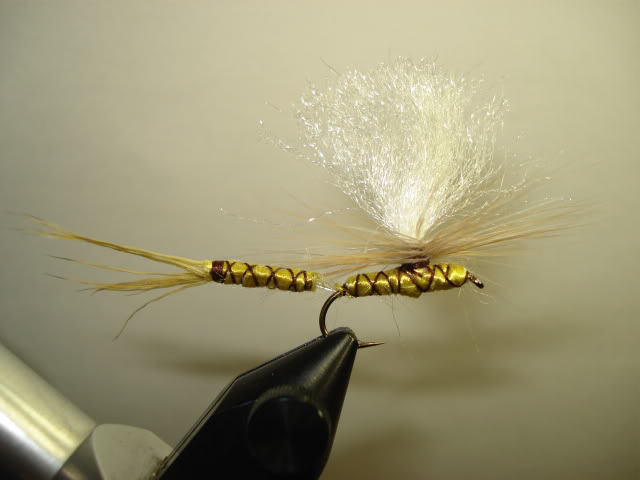 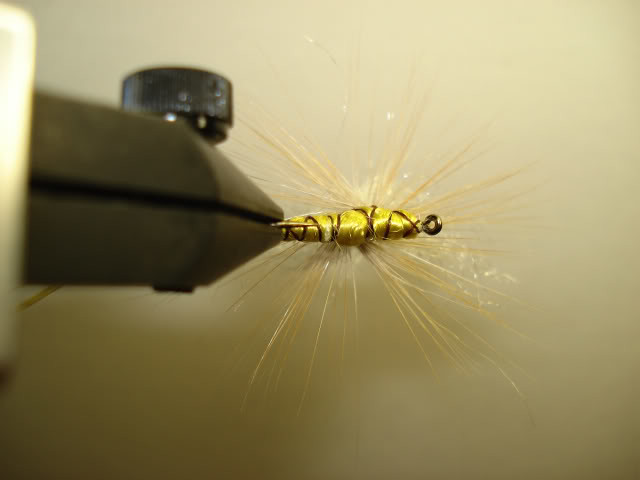 I've modified this pattern to a parachute which produces a more realistic impression on the water and which can easily be changed into a spinner by cutting off the post. The naturals have a mottled brown body with a yellow abdomen and the cross hatched brown thread on yellow mimics this.

Parachutes are best tied with one size longer hackle than the traditional hackled flies and getting hackle that is long enough for a flex hex is difficult. Modern genetic capes have longer feathers with denser hackle but the hackle length is shorter. I use my old Metz necks from the 1980s for the size 2 hackle that I use for this pattern.