Looking at the posts in the 2020 thread from this time last year I see phrases like "on my way to work." Makes me nostalgic.

We had a big snow in December that melted pretty fast. Housatonic has just now come down to a dull roar, below 1000 cfs. Decent clarity, from what I can see. So I'm sure it can be fished. Might even be worthwhile. Cold and unpleasant, though.

Tribs are the ticket right now. There is a bit of snow here and there, and expect ice. Plus generally miserable weather. I used to like cold weather.

Later this week it is going to be sunny and up near 40, which is a good time to head out to a little blue line or the Blackberry and see if I can find some activity between 1 p.m. and 3 p.m.
G

Does this include Farmington talk? Cause I was there over this past weekend and got skunked hard. Don’t feel bad as all others I spoke to said it’s been pretty tough the past 2-3 weeks. Also, surprised to see that many people out. Probably cause it was a holiday weekend and somewhat warm (for January).
P

Opened my season today on the humble Blackberry River in North Canaan. Actually it's in East Canaan, which is part of North Canaan but everybody calls it Canaan, including the post office. Just to be clear, what the state calls the Town of Canaan is called Falls Village.

Next week we'll discuss the difference between the covered bridge, Cornwall, and Cornwall Bridge.

Connecticut opened the trout season last week, about five weeks ahead of schedule, in order to soothe the COVID-19 jitters of the populace. (Getting enough vaccine for everybody would also be helpful, but we'll take what we can get.)

For those of you elsewhere, the Blackberry forms out of I don't know how many little brooks in the hills of Norfolk (pronounced "Nor-fork.") There's a waterfall in town where US 44 makes a sharp left (heading west) and the stream runs right along the road for a few miles before it wanders off into some scrubby woodland and through cattle pastures.

It is in the latter that it warms up considerably.

Then in East Canaan (which is in North Canaan and not to be confused with the official Town of Canaan, which is Falls Village) the stream is dammed up at Beckley Furnace, which is Connecticut's lone industrial state park and the site of an iron furnace from Ye Olden Days.

This is the stretch that is of interest to anglers.

Today I made my way downstream to a second, smaller dam which creates a modest waterfall which in turn dumps into a limestone shelf that has all sorts of nooks and crannies. I call this formation "The Lab," because it's where I go to test things out -- like a saltwater fly on a one weight, or Tenkara Euro-mopping.

When the stocking truck has been through the fishing is so easy it's embarrassing.

But they haven't been there yet, and the stream has a lot of wild-ish rainbow trout that make their way up from the Housatonic with a vague idea of reproducing.

So today the Lab yielded a dozen or so bows, none bigger than 15 inches, all taken on nymphs both great and small.

The sun was out and it was about 50 degrees, give or take. The footing was a little tricky, with some remaining snow and ice.

The big surprise, other than the fact that I remembered all my knots and didn't forget anything critical, was the rainbow that drifted up and almost grabbed the large bass popper I was using as an indicator.

Nobody cared about Wooly Buggers.
P

Well that was fun. Two days of trying some new things out, and then yesterday, where the main action was watching the water level rise four inches in about two hours. A sunny day in the low 60s will do that.

I explored Sandy Brook in Colebrook yesterday. Couldn't get anything going but nice-looking water. Definitely on my list for this early part of the season.

How far up north does the Housatonic get "nice"? I've fished the lower part of it (from Stratford to Shelton) and it is... Hmm how do I put this... Shitty. Looks like a polluted river in an industrial park. Drove past a really nice looking stream in Newtown many years ago but not sure it was the Housatonic?
N

Cosmo - Stratford/Shelton is, in a word, Shitty... Take a drive up Rt 7. Starts to get real pretty around Kent. Great fishing throughout Cornwall.
Check these guys out to stay in touch - http://www.dryflies.com/river-report.
Last edited: Apr 20, 2021

Northeast Brookie said:
Cosmo - Stratford/Shelton is, in a word, Shitty... Take a drive up Rt 7. Starts to get real pretty around Kent. Great fishing throughout Cornwall.
Check these guys out to stay in touch - http://www.dryflies.com/river-report.
Click to expand...

Haha yes it is. Thanks for the tip!
P

Every time the Hous gets down to a dull roar it rains buckets and we start all over again.

I've concentrated on little blue lines and playing around on the Blackberry, especially in the upper reaches where you have to walk around cornfields and deal with some pretty squirrelly terrain. Because the spring hasn't really sprung the underbrush hasn't really exploded yet, which is good news for the stream creepers. Worth a try if you happen to be in the area, but I wouldn't make a long drive for what is, in effect, a put and take stream with some challenging aspects.
P

As above, except it hasn't rained in a while and spring has definitely sprung. In the Blackberry this morning I either caught the same stocker brookie five times or I found a pod or herd of them, all looking pretty much identical. They all took the same Surveyor nymph, size 14.

Then they (or it) stopped.

We also had our first fatality on Saturday, May 15, near the boat launch above the Great Falls. A man drowned, apparently after using a rope swing. As of yesterday they hadn't found the body.
P

We have shifted abruptly from cold wet spring to hot dry summer and the Hous has responded accordingly. Which means it's probably best to confine your trout fishing to the early morning hours and target smallmouth the rest of the time.

I had a couple hours to kill between assignments yesterday so fished the no man's land between the power station in Falls Village and the dam/falls. In one corner pocket I caught about 746 rock bass (I think) and two really good smallies -- fat, strong, bronze, vertical stripes.
P

Prowling no man's land again, landing some impressive smallies -- and watching with bemusement as a van load of Yoots, attended by a counselor who didn't look much older than his charges, clambered up on the rocks at the Great Falls and jumped in.

The flow is low enough that they got away with it, but this is not a good omen for the long, hot summer.

I did try my hand in the TMA yesterday morning. Warm enough to wet wade but I was the exception. A decent brown (but not a holdover) grabbed a heavy hare's earish nymph with a bit of orange tail on the first cast, but the Curse of the First Cast was averted moments later when a rainbow (also a recent arrival) decided to grab the large bass popper I was using as a bobber. That was abut 10:30 a.m., and by 11:30 it had shut down completely, without the compensation of smallies. This was at the Elms.

My advice for anyone silly enough to venture into the Northwest Corner on Memorial Day weekend is to leave home at 3 a.m. so you're on the water by 6. The pleasure-seekers, lotus-eaters, and otherwise many-headed generally don't appear until 10 a.m. at the earliest.

Better yet, stay home, avoid the crowds, and do that spring cleaning that somehow didn't get done.
P

The weather turned cold and wet, with more to come today. Hous roaring at 1670 cfs as I type this.

And to think at the beginning of last week I was wet wading and targeting smallies.
P

SOMEWHERE IN NORTHWEST CONNECTICUT -- Introducing the Grotto, which is some distance below the falls that serve as the line of demarcation between the known downstream and the always sketchy quarter mile between falls and dam on the warmwater lake.

The stream narrows and runs through some ledge, forming a chute with ledge on one side and a massive boulder on the other.

There is no easy way to fish it, just a bunch of compromises.

The other day it was flowing at a pretty good clip and I bet the deepest part was six feet.

Standing on the ledge on the right in the below photo I deployed a Tenkara rod at 11 feet and two nymphs, a heavy Bread and Butter on point and a caddis emerger on dropper. 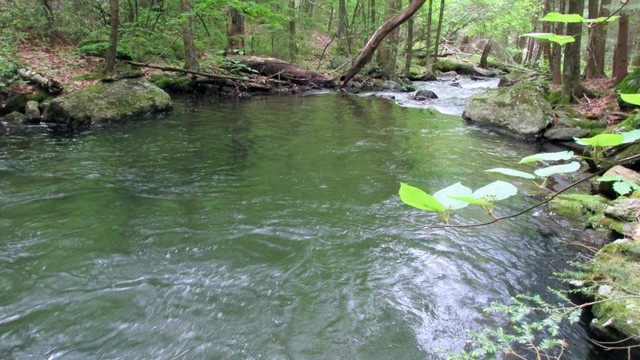 Tenkara rods are very good for this sort of thing. They are typically much longer than fly rods, especially the type of fly rod I usually bring to streams like this (i.e. 6 1/2 foot 4 weight glass).

The same impressive brookie (I think) that I caught earlier in the week took the B & B, and somewhere during the struggle a smaller one grabbed the caddis.

It is at moments like these that the Tenkara disadvantage of not having a reel becomes obvious. As I was anxious not to stress these fish, and as I had no net, and as I was essentially holding on to a piece of string with two wiggly wild critters attached, and as I got tangled up in a tree, and as when I tried to sit down and fumble the camera out of my shirt pocket I missed my rock and sat down with a bump in some mud...this was the photo I got. 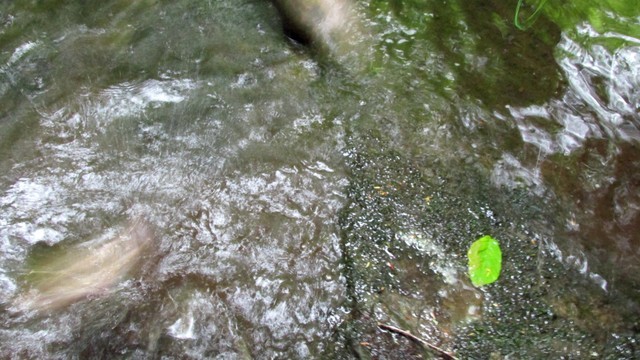 It's been an extremely mixed bag around here. After the miserable Memorial Day, we had several days of unsettled weather before settling into what is now the third day of stultifying heat.

I took a stab at the above brook this morning and immediately bailed as the water was too warm. Also the perch fingerling.

The Housatonic, after a temperature respite, is in Full Smallie Mode. I tickled a couple on woolies and nailed a fat, stubborn one on a size 12 Walt's Sexy Worm this morning, upstream of the TMA in Salisbury.
P

Meanwhile I've floated the above-mentioned warmwater lake for largemouth and crappie etc., with nothing to show for it. I had technical difficulties with the pontoon frame and it is currently held together in critical areas with cable ties. I am not at all confident in this arrangement and so I am not venturing very far from shore. I am going to the hardware store tomorrow in search of a sturdier solution.
M

Hi patrick62, I love these reports. They provide considerable vicarious pleasure and I love your descriptions. Keep up the good work!
P

Interesting factoid -- On the brook referenced above, in which a large percentage of its volume comes from a warmwater lake, the water temp at the falls yesterday afternoon was 74.

My buddy and I proceeded downstream. Maybe 100 yards there was a vigorous spring. Stuck the thermometer in there, got 58 degrees.

Another 50-60 yards downstream, the Grotto, surface water temp (meaning I held the thermometer about six inches down) was 62.