Do you have a favorite small stream you sneak around often? Im talking about those small brush choked little mountain brooks and spring creeks here. If so how bout sharing a few pictures and stories from your own little paradise. I would not name the creek if I were you, I will be putting some up soon, our small creeks open on June 14th so I will be on them in a couple days.

heres one of my spots 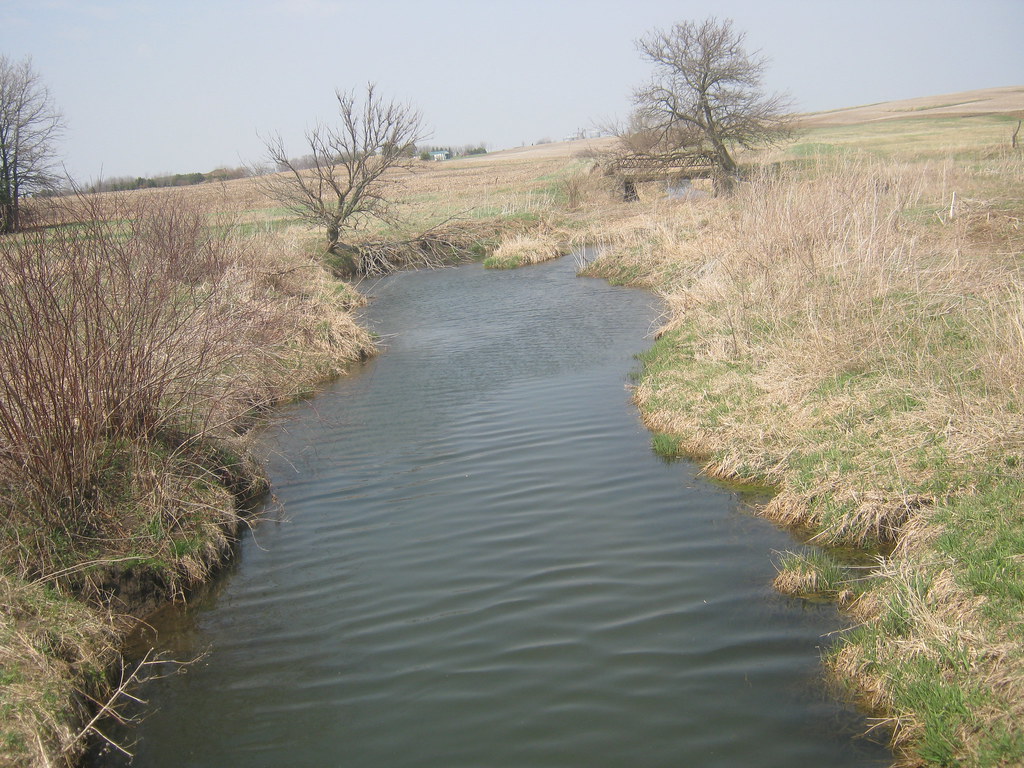 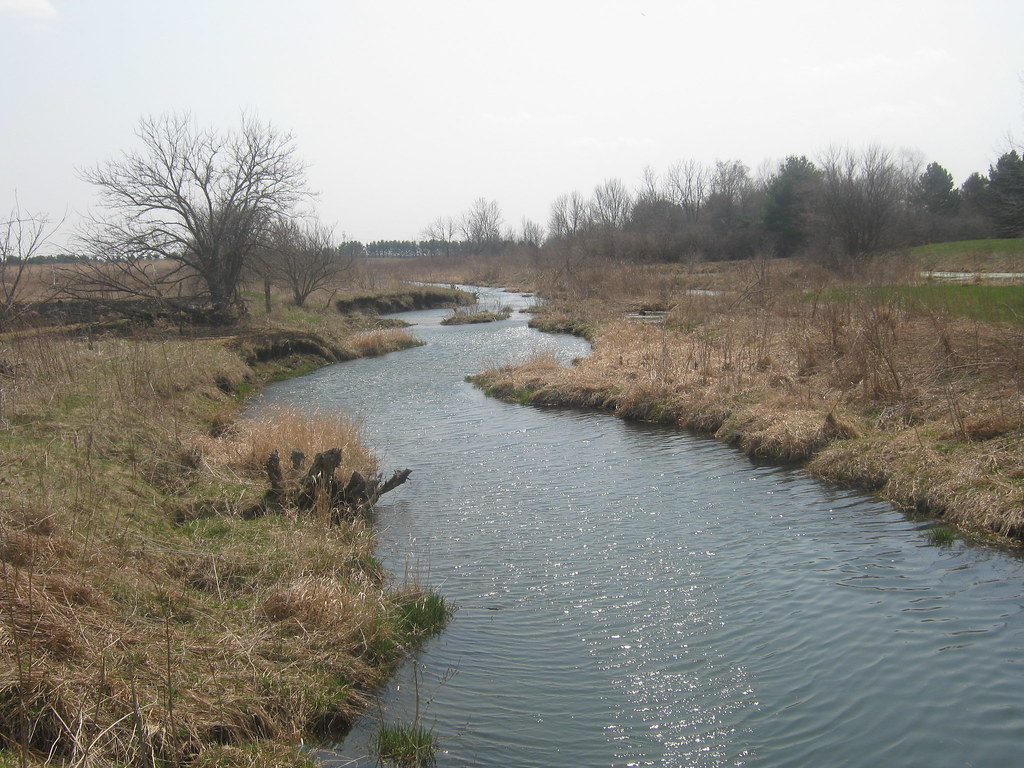 
As someone that enjoys my 0wt rods and small creeks. I will have to contribute to this thread on a regular basis....... Once runoff is done.....

Well I was going to give you more rep for posting this. Unfortunately it won’t let me (guess the last time I gave rep was to you).

the upper section of the Marguerite(that IS small) the upper section of the Lergue(that is NOT really big) I've got a number of tiny streams in Wyoming that I love to fish. In most places you can jump across it. And there are more brook trout than you can shake a stick at. 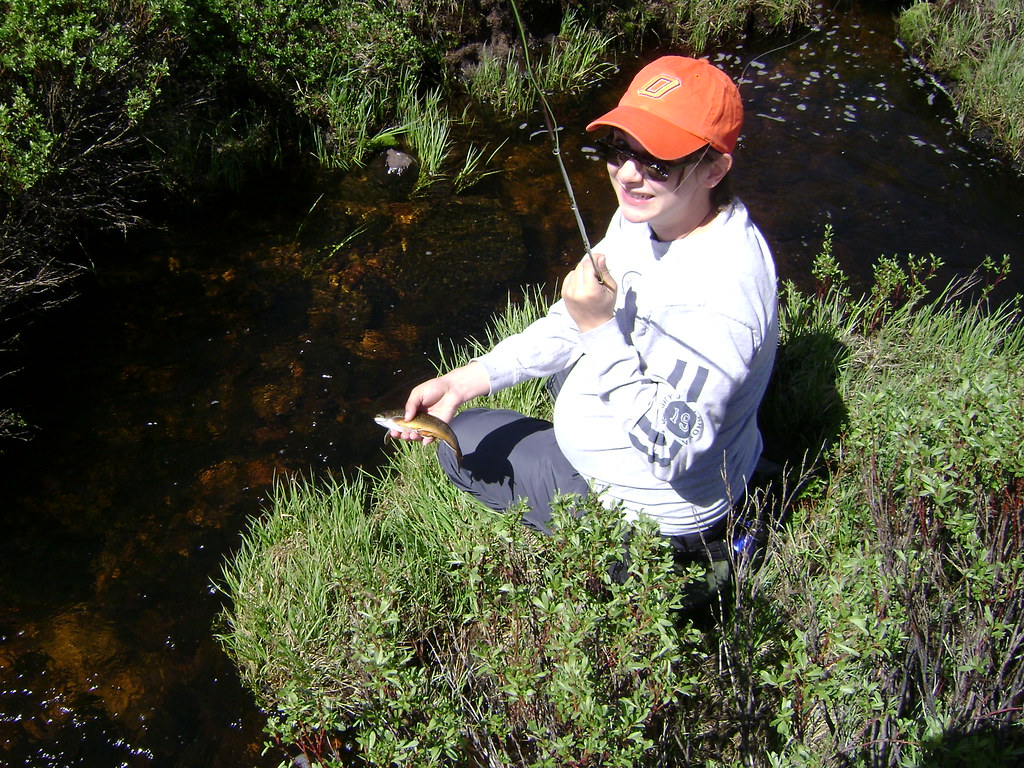 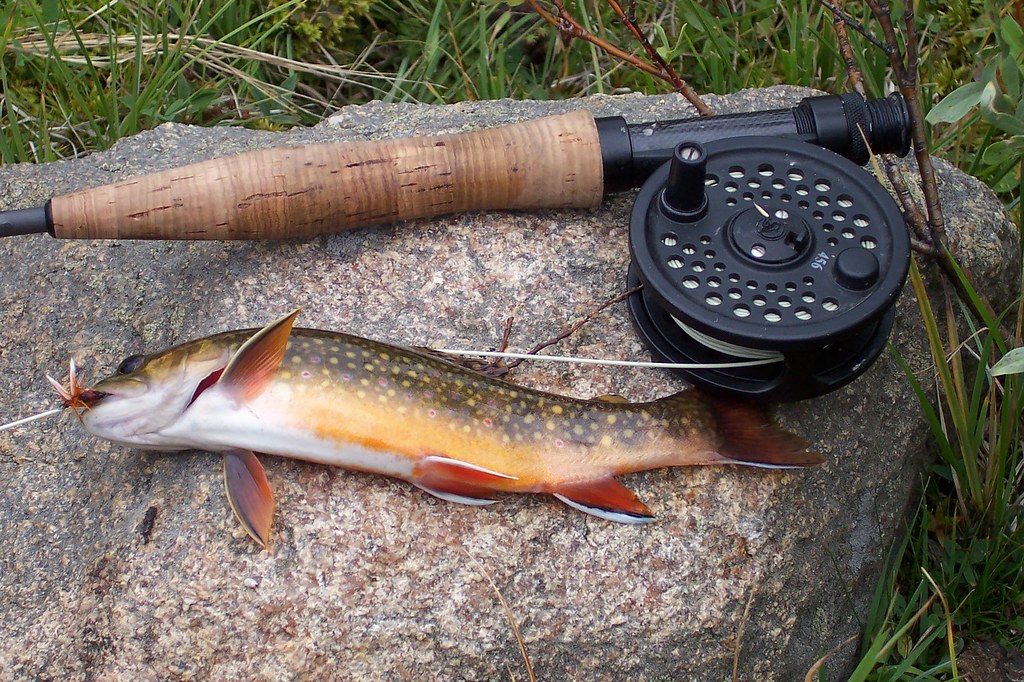 Thanks bud and I will look forward to your posts

What a lovely little spot you've got there, keep it coming everyone,

YAY! New favorite thread!!!
I haven't been to my favorite small stream recently so I have no good pics to share. However, I will try to add to this asap!
Thank you Ard...

went down to the same place today and i was surprised to see how much the water levels had dropped. 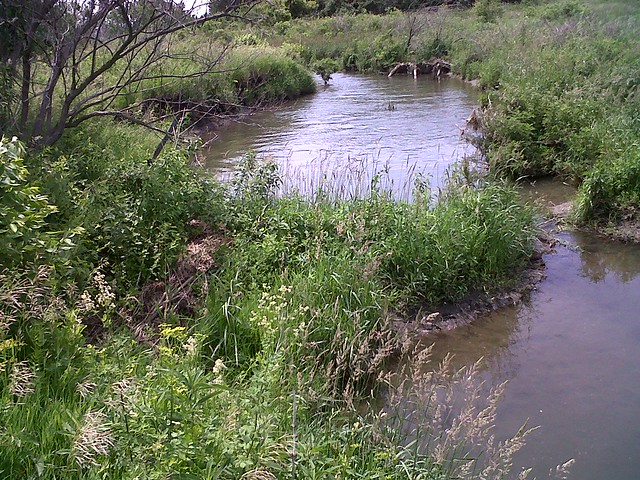 slow fishing but did manage this guy. 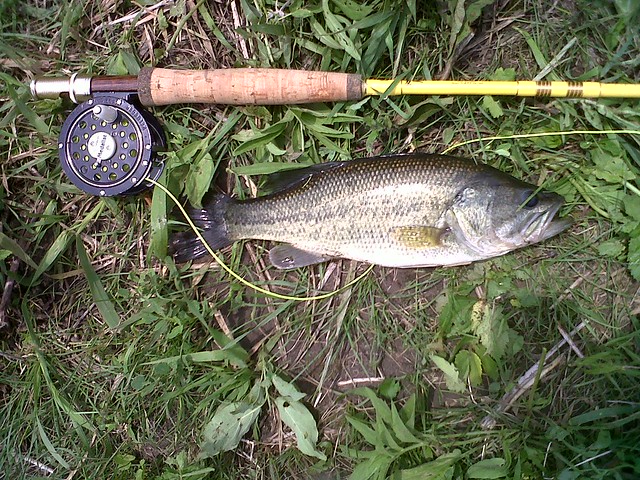 not real big, but super fun on the glass.

Because our rivers and most streams are a mess right now I went out to go float tubing yesterday.

Float Tubing 14 June 2011
It was so nice to see the sun and calm skies after such a long bout of really lousy weather. I loaded up my Renegade and motor and headed out to do a little prospecting to find some willing fish in a different reservoir.
I ended up having to do a little detouring to avoid some field burning, so I thought I would just take a side trip up into the hills, and look at some creeks while I was at it. Yep, they are still running pretty high and off color. 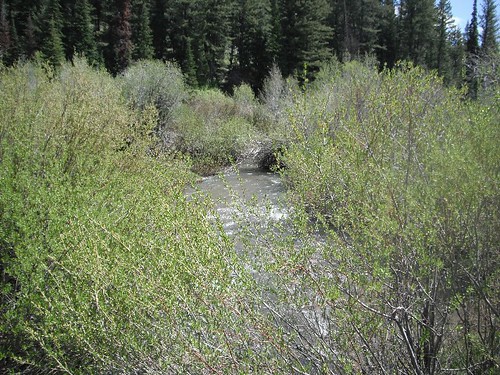 Then I thought about seeing if I could get up a bit higher and look as some tributaries that I wanted to investigate.

This is really turning into a major detour now. As you can see I am easily distracted and have a short attention span!

The road was not great in spots, but it was ok. There was no mud, and it wasn’t soft, so I wasn’t damaging it by being on it too soon. When it had dried out, it left one or two of these “mud puddles”. Good thing that there is a nice hard rock base in this area, otherwise I may have been using my float tube in this lake in the road! 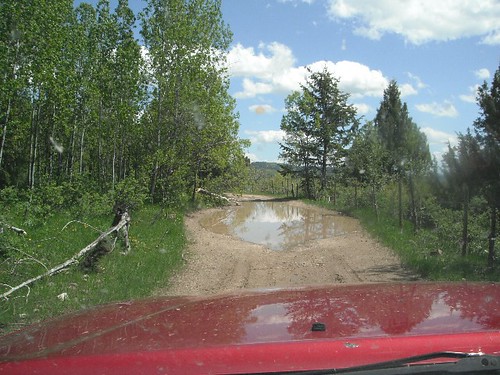 So after a bit of a hike…….Success! This little feeder stream is running higher, but is almost completely clear. I am practically dancing in anticipation when I spot a fish in a side pool. I can hardly wait to try this creek out. I love small creek fishing! 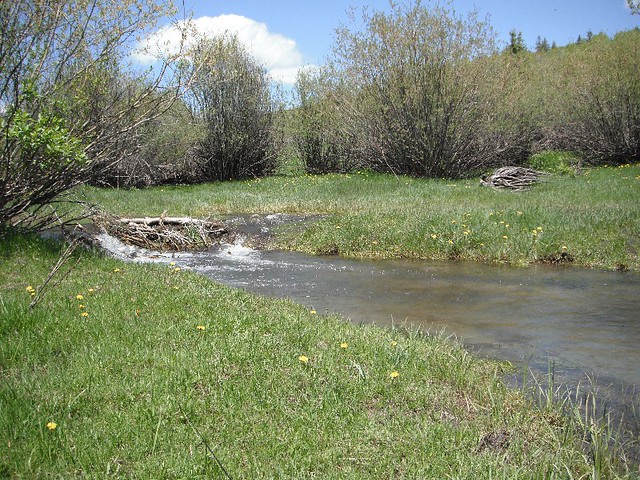 As I was rigging up my 4wt rod, I realized that most of what I had with me is for lake fishing! I know I have nymphs and streamers but, I like to fish little streams with small dries. I began searching franticly through my junk, and I found that once again my packrat tendencies will pull me through. I have a small box of dries with me - Perfect! …… but looks like it is chapstick for floatant again. I wonder if the fish prefer SPF 15 or 30??
It is sure beautiful up there! The wild flowers are amazing, and everything is so green. 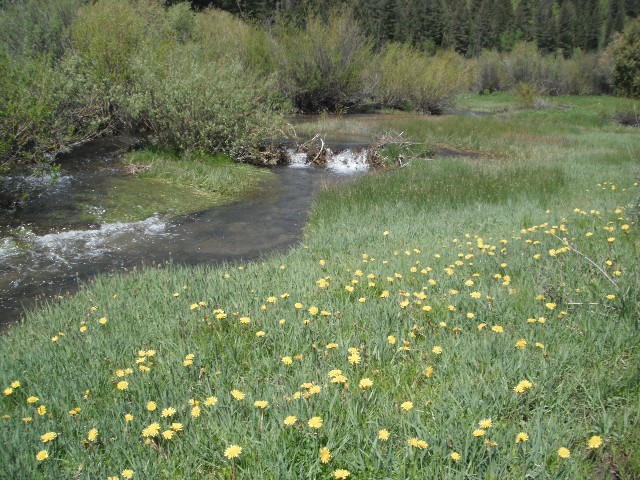 There are lots of bugs in the air -- from midges to an occasional mayfly and even a stray caddis thrown in every once in awhile. I tied on a little elk hair caddis, and holding my breath I cast it out. Nope, two snubs and a splashy tail flip said that that was a poor choice. I hadn’t been there 10 minutes, and I was already changing flies! I tied on a parachute adams and bingo! We have a winner!

Little native cutthroats – how sweet it is. 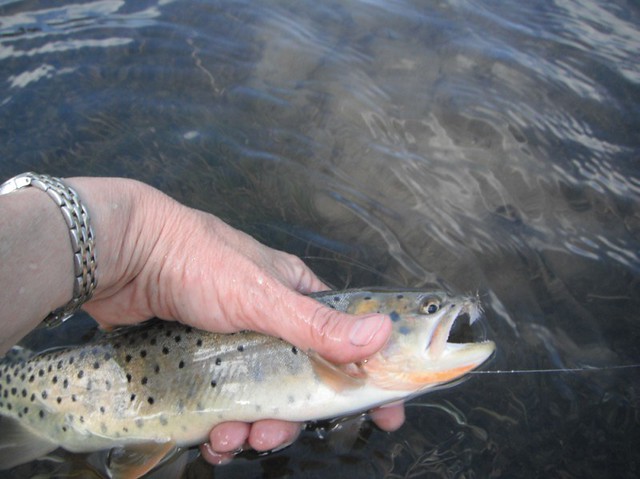 Needless to say I spent the day on the creek. My float tube just went along with me for the ride!
Last edited: Jun 15, 2011

Here is my little hideaway but not so secret river. Naturally reproducing brwons and brook trout, all wild and a beautiful place to fish!

This is working out well, Great writing and photos and I'll send my Hello to cpiercem! It's great to see new people along with senior members posting and writing

I haven’t really been fishing creeks lately as most everything has been blown out. Stillwaters and a 7wt has been the name of my game recently. As a matter of fact; I postponed my Stillwater trip that was originally slated for today.

My day started pretty early as my destination was a nice little spring creek (that I will not mention by name) less than 30 miles from the Montana border. After I got up, put my stuff in the car and put the dogs out I was on my way. This time it was a solo trip, so I didn’t have to worry about picking anybody up. The other nice aspect of this trip is the fact that my wife and kids are in California. So no having to try to guess at when I would be back.

It was somewhat overcast I made my journey. I past by an awesome tailwater on the way wishing that the flows were in the normal range; if they were I would have fished it tomorrow. Next up I drove past Silver creek; not sure what’s up there but the reports have not been good so far from that place. Once I got to the Craters of the moon national monument, I knew I was making progress. After a quick stop in the town of Arco I was back on my way.

I arrived at the creek at around 0800 or so, got out and started to gear up. While I was getting ready another car pulled in and he started gearing up. We chatted a bit and decided he and his buddy that was on his way would take the section below the bridge and I would take the section above. With that I was on my way.

When I first saw the creek, I remembered why I love fishing these little places. Sure the fish are smaller but that’s not what it is always about. You see I had a pretty long and stressful week at work and this was just what I needed to relieve the stress.

As I waded in, I noticed I spooked about 8 fish…….Oops. I stripped off some line and started casting. After a short time I had my first take. When I landed him, I found it very fitting that this was the first fish of the day.

The next fish from the same run had some shoulders on him….

After working through several braids of the creek I decided to take a break and just relax for a bit. By this time I had already lost count of how many fish had been landed.

After about 15 minutes I decided to get back to fishing. Almost immediately I was rewarded with this cool little guy.

Now I finally made it to one of my favorite sections of this creek. There are a couple of reasons I like this spot: 1. it is slower and deep 2. The fish in there typically look good and put up a nice fight. Actually all the “larger” guys are quite fun on the 0wt rod.

As I continued my way “up the creek” it was more of the same. You have these runs that hold on average 10 or more fish. What is funny is that while they spook when you wade there, they don’t seem to spook when you hook one of their buddies.

By this time in the day I started to feel rain drops. A quick look and yup a storm was rolling in.

I decided to check the time and it was already 1435. What the hell I thought to myself; I had just fished six straight hours and forgot all about lunch.


I decided to check out another spot which ended up being a great choice. This spot had quite the population going on.

Oh there it is.

I was able to fish it from 1440 until I decided to leave at 1620 and I caught fish the entire time. Now the only reason I decided to leave is because by that time the rain was really starting to come down and I had caught so many that I was just done. Plus I had ran out of powdered floatant (the key to success on this creek. Well with the right flies too). I made it back to the car and took a couple more shots and got geared down.

Oh I almost forgot to add these pics Yes the creek holds more than just rainbows; although one typically will catch about 75% more bows.

Hope you enjoyed the report.

I used to fish places that were loaded like that in Pennsylvania, yep, Pennsylvania. I'm also real familiar with fish that demand a high floating fly or for whatever reason the catching slows right down. For those places I carried both the coarse dry powder to crush and rub the water & slime out and a bottle of Frogs Fanny to give them the final touch up before I threw them back at the fish. You gotta love a creek that gets you in the frame of mind so that a 12" fish is a trophy and the little guys put up a good fuss when you hook them too

Great report on your creek!

It sure looks like nothing has changed in Idaho. When I lived in Idaho Falls in 1966-1967, if you couldn't catch them on a size 16 yellow humpy, it was time to go home.

Beautiful pictures. Man that really makes me want to get out and fish. Thank you for sharing.

Thanks guys, I am glad that I was able to contribute to the thread.

@fishnski guy: The humpys I was using were quite a bit bigger than #16
B