A fly from from one of true icons (at least to me) in the sport of Steelhead fly fishing, the late Harry Lemire.

An excerpt from an article in the Jan/Feb 2013 issue of Eastern Fly Fishing magazine, written by Rockwell Hammond.

.....I did not know Lemire, but knew of his important contributions to the sport of steelhead fly fishing. Here was a man who developed the first steelhead dry fly specifically designed to be waked, the Grease Liner. That was in 1962, and today it is still a standard and a model on which many floating patterns are based. Lemire continued to develop numerous steelhead patterns, such as the Thompson River Caddis and others that most of us carry in our fly boxes.

His early adoption of the two-handed rod for steelheading was tremendously influential. Back in the 1980s he returned from a trip to the British Isles with a Grant Vibration rod. He showed the rod to his friend Jimmy Green, at Sage Manufacturing, and encouraged him to develop two-handers for steelhead. Lemire tested many early versions and became a major player in what has become a revolution in fly rods around the globe. He also provided considerable input into the early fly lines needed for two-handed rods and the diversity of casts they offered anglers. Even before Spey rods, he was customizing lines, primarily sinking-tip lines, and influencing new designs so badly needed by steelheaders.

Maybe Lemire’s most recognized achievement was the elegant salmon flies he tied in-hand. One Christmas, his wife, Marlene, gave him a copy of T. E. Pryce-Tannatt’s classic tome, How to Dress Salmon Flies, starting him on a journey that may have been the most satisfying of his angling life. Beautifully tied feathered-wing salmon flies flowed from his fingers; they were so expertly rendered that few tiers can match them, even using a vise. Always generous, Lemire contributed many of these flies to worthy fundraisers, where they brought in more than $1,000 per fly, a lofty price tag that is more a statement about the quality of the man himself than about the perfection of his flies.

Lemire was the consummate gentleman angler. He loved to fish, and whether on a steelhead river where he was easily recognized, on the ocean salt in pursuit of silver salmon, or on a British Columbia trout lake, he caught fish. He was a serious student of fly fishing, but there was a relaxed nature and approach to his fishing that made him the most enjoyable of company.

This written by Harry himself...... http://ronnlucassr.com/fly-gallaries/harry-lemire/ 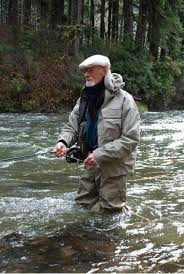 Hi ‘Harry Lemire, here. A little bit about myself .

I’ve been fishing and tying flies for most of my life ,with steelhead being my biggest passion. And as my wife says I’m either fishing or getting ready to go.

The getting ready to go part include a lot of fly tying and after a while you end up with one hell of a lot of flies. I needed something more in my tying, I needed more of a challenge , I needed creativity. well in 1990 my wife seeing my dilemma gave to me the book “How To Dress Salmon Flies” by T.E. Pryce-Tannatt, and said, here this will keep you busy.

In this book were all the instructions on how to tie full dress Atlantic salmon flies the old way. The way they did it before vises were invented. I went through the book from cover to cover twice and couldn’t wait to get started. well it’s been over sixteen years now ,and I’m just as excited about it now as I was then. Here is a sample of what I’ve learned from that wonderful book.

This particular pattern sees little mention anywhere. I noted it over on Ronn Lucas Sr.'s website, and thought I'd give it a try. It's a slight variation from one shown there that Harry had tied himself. I would hope Harry would think it worthy of a swing.

Ard said:
Just found this one and am bumping it up so others might admire it
Click to expand...