Here's an excerpt from my blog post from Wednesday's Tiger Trout trip.

"We got to Roblin around 9pm and it was too late to fish. It had been raining hard the entire way and I was a little concerned that the road into Twin would be mucky. We over-nighted just outside of Roblin and got an early start Wednesday. The weather was chilly and wet. The forecast said a high of 6ºC and scattered showers. Not exactly ideal but I figured that fishing with streamers could be a good start. The water temperature was hovering around 55ºF which is perfect for streamer fishing!

We kicked out from the launch and it didn’t take long before I caught a decent fish right on a beadhead leech pattern. This one was a chunky female that put up a heck of a fight! It even jumped a few times.

The fish were scattered and we had to work for them for most of the day. The majority of the fish we caught were shallow and close to the shoreline or structure. I was using an intermediate fly line and stripping the flies fairly quickly. Josh was using a floating fly line and weighted flies.

The wind was blowing out of the east/southeast and I suggested we head to the windy side of the lake. We found fish right in tight to the reeds in very shallow water. We were able to hook up with some decent fish and a number of 13-16″ stockers as well. Josh tried out a 5″ Sex Dungeon streamer and had two huge fish follow right to the tube! He was fishing from a pontoon boat and was able to stand up and get a good visual on any fish following his flies. There’s definitely some fish over 28″ in the lake and I think BIG flies might just be the ticket in low light!

Josh ventured into a small opening behind some reeds and was fishing in the tiny open pocket. He had tried fishing the reed edges with no luck and as he was rowing back out he hooked up a fish from the middle of the pocket! After a good battle and the fish burying itself in the weeds, Josh was able to bring the fish to the net! This was a very colourful male and a beauty specimen!

Like their parents, Tiger Trout colour up in the fall and in the early spring you still have a chance at catching males all fired up. By late spring this colour tends to fade. We were lucky to be able to catch one in all its splendor!

We worked our way around and I suggested we give it a go in the smaller lake. Two weeks prior you couldn’t fish it because it had turned over but I said it might be worth a go in there. We split up and Josh hit the west side while I hit the east side. I hooked up a big female off an opening the reeds. She had some serious shoulders on her!

After a couple pictures I kicked back to the east side and continued working the shoreline. BANG, got into another good fish and landed a brute! This fish was very healthy and both it and the fish before measured 24″, very respectable trout!

We both continued working the shorelines and Josh joined in on the action with a few really decent trout! He was able to end off the day with a personal best 24.5″ tiger! I was really glad Josh was able to get into some big fish and I was not expecting for us to do so well! Good job buddy!

We ended up with close to 40 fish landed between the two of us. It was a fantastic day on the water and despite our frozen hands, we were grinning from ear to ear! If you’ve never caught tiger trout, they’re a hybrid between a Brook Trout and a Brown Trout. They are aggressive, hard-fighting, and each fish is unique in colour, size, and shape. They’re not commonly available to fly fisher’s as they’re difficult for hatcheries to produce Tiger Trout. The mortality rate is upwards of 95% and they’re a lot of work and grow slowly when young."

These are beautiful fish and big! I don't know much at all about tiger trout, are these spring breeders or do they just keep the kypes from fall breeding this long?

Tigers are a hybrid between Brook Trout and Brown Trout. They're sterile and cannot reproduce. Because both Brookies and Browns are fall spawners though, Tigers will colour up in the fall. If you're lucky, in the spring they will still have a bit of colour left over.

Nick: Great trip report and photos of Tiger Trout. The only place in Wyoming that has Tiger Trout is High Savery Reservoir, I've fished there a couple of times, but have yet to land a Tiger, but it is definitely on my list.

Talk about some gorgeous fish! Great photos! What wt tackle were you guys using for them?

lthrnk03, I was using a 5- and 6-weight. As long as you use the angles you can control them and tire them out fairly quickly even with light fly gear. =) They do scrap pretty good though and don't give up without hard runs, a few jumps, violent headshakes, and the odd gator roll. lol

Beautiful fish! Thanks for sharing!

Location
On a trout stream/Suburban Pittsburgh

Those are the most gargantuan Tigers I have ever seen! Seems you have found yourself quite the honey hole of tigers! Congrats on a great outing and thanks for the excellent trip report and photos.

Thanks! It's definitely a world class tiger trout fishery! There are fish pushing 28"+ in there and your average fish are 20"+ with some serious shoulders! We had two follows that would have been in that 28" range. My buddy was tossing a 5" white sex dungeon streamer and had two monsters follow right to his pontoon but no takers. I think in a couple weeks fishing those big streamers at last light couple be deadly!

Also in a couple weeks, as the water warms, tigers start keying in on the surface and you can do very well early morning and evening fishing poppers and divers on the surface! This is a total blast and the strikes are violent!

Location
A Scot in Sherman Connecticut

Superb fish, must have been a great trip. Thanks for taking the time to share.
G

Those are some amazing fish, you're right about the one male being one heck of a specimen! I really do love their patterning. That one you caught certainly does have some monster shoulders and a face like a grouper! Glad you guys had a great day!
H

sweet fish thanks for the post and the pics!
L

Nick,beaut Fish,beaut Pics,even though I'm yet to catch one I've read heaps on them & seen many pics over many years,yours are by far The Largest I've seen,hopefully you both can hook one of those Monsters.
Brian.

All I can really say is it's the fishery and proper management that have proven to be successful! It's pretty amazing to have a fishery where your average fish is 20" and it's not uncommon for anglers to catch 10+ fish in a day!

Because they're such a rarity and such an aggressive fish, fisheries knew that in order for the fishery to be successful, a no kill and no power boats regulation would have to be implemented. This has been the critical factor that has put the fishery on the map!

I was there a couple weeks ago and caught some of the larger fish as well, up to 26-inches, and some really nice males! Unfortunately on that trip I was by myself and was limited to my photos of fish. =S

I've only ever caught one and don't have any pics, but I thought there should be a thread for tiger trout pics.

bigfishcatcher said:
I've only ever caught one and don't have any pics, but I thought there should be a thread for tiger trout pics.
Click to expand...

Bunch of years ago they used to stock a bunch of them in the local 'pond', more like a really big pool behind a damn in a small river.

They are a riot! Not super selective for the most part and you never have to guess when they hit a streamer or a retrieved nymph.

From my fishing buddy up in the Wisconsin Driftless region. Natural Tiger, not a stocker. 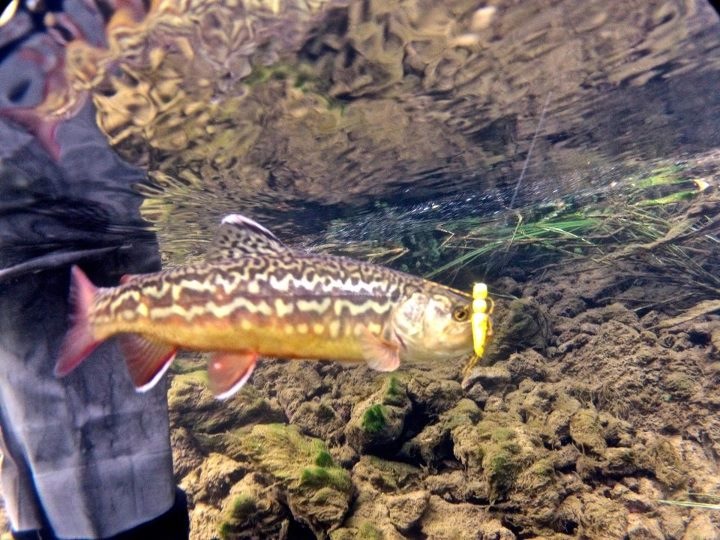