cpiercem said:
Beautiful tiger! That has to be one of the most striking colored tigers that I have seen.. I have seen lots of pictures of them, but I still need to get somewhere to catch one! It's on the list.
Click to expand...

Definitely on the list. Even on the streams they occur naturally, they're still 1 in a thousand fish.

I'm going to get my buddy to take me to that hole next time I'm up that way.
C

incredible creature ! when he pulls in the lot I'm sure he gets some space...

I've never seen one of these unique fish. I'd love to though. There just aren't many places where I fish where Brookies live in numbers with browns.

Unfortunately the "cut-bow" hybrid is much less exotic.

Here are a few of the tiger trout I have caught. First two are from an alpine lake in southern Utah. Third is from a private water in Virginia.

1flyjedi said:
Here are a few of the tiger trout I have caught. First two are from an alpine lake in southern Utah. Third is from a private water in Virginia.

Is that last one Rose River Farm? It looks very familiar. If so, was it worth the rod fee? I've driven by there a hundred times and thought about taking friends and family there to introduce them to fly fishing.

Wow these are some super pretty trout!!! Thanks for sharing never even heard of them until I peeked in this thread. Knowing that they are hybrid fish can they still breed to produce others?

winxp_man said:
Wow these are some super pretty trout!!! Thanks for sharing never even heard of them until I peeked in this thread. Knowing that they are hybrid fish can they still breed to produce others?
Click to expand...

No they are sterile.

It is a mixture of Brown and Brook trout I believe.

Found this pretty good article on them
http://www.bouldermountainguide.com/tigertrout

But nonetheless they are amazingly beautiful, I hope to catch one, one day, just so I can say I have haha

Tiger trout sometimes, but rarely, occur in nature when browns and brooks, which share the same autumn reproduction cycle, accidentally mix eggs and milt.
Coloration and marking most resemble brook trout; a mean set of teeth and proclivity for eating other fish stamps them as the progeny of browns.
A so-called "back cross" — female brookie and male brown — yields what commonly is termed a leopard trout, lacking the brook trout worm-like patterns and with more spots. This color pattern is considered less attractive, and the blend seldom is made.

Diamond rush, that last tiger was caught at Big Bend Farm. I would definitely say worth the rod fee.

Thanks, winxp man! And yes, they are sterile mutants.
G

Figured I would throw my little guy in there.
I just started Fly Fishing last week and am lucky enough to have a tributary a mere 30 minute fire road ride from my house. It is only open from May 1 to Sept 30 and is a single hook, barbless reservoir with a 5 fish limit, of which only one can be over 14".

I had not idea what I hooked when I got it but it was aggressive and took a fly I was dangling over the edge of some weeds tucked in the trees. It was only about 10-11" long but still great fun. Took the photo with my iPhone so sorry for the quality but it was a BEAUTIFUL fish! 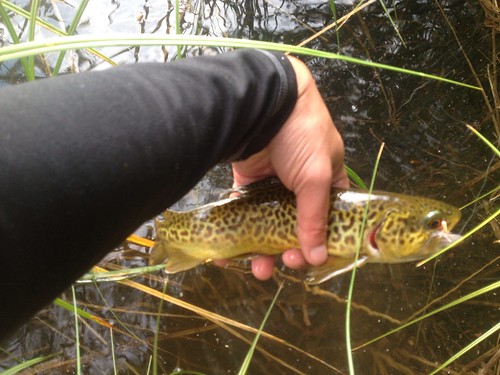 Great trout Greg! I've been fly fishing for trout for ... 16 years? and have never encountered a tiger trout. You are a lucky fisherman.
G

Thanks Dean. I feel very lucky that I was able to catch one on only my second fly fishing outting. I really had no clue what it was until I showed a co-worker that fly fishes. Guess that is the benefit in living in one of the meccas for outdoor activities.

So much for NJ being "the garbage state"!!!!! My first ever NJ native tiger trout!!! First one I have ever heard of being caught or have seen in real life. Unbelievably stoked on this fish.

What a pretty little guy! Whats that pink thing?
B

The squirmy wormy. I am not a traditionalist, to say the least.
J

Very jealous, one was a real hook jaw!

I may as well throw in my little gem from last night. Fishing a small stream about 20 minutes from my house. My first tiger trout