I don't remember how I found out about this five-footer but it was only 62 bucks with shipping so I thought what the heck.

Tested it out yesterday using a 50-inch furled leader from our friends at Cuttthroat as the line.

I was flipping flies over just fine yesterday in a medium-sized stream, the Blackberry. Nothing came of it but I did catch a trout-sized piece of ice which the rod handled rather well hahaha.

Didn't catch anything with a regular rod either so it was clearly not my day.

The Tiny's sections are much shorter than usual, as you'd expect. When collapsed, it fits in the front of my Umpqua pack next to the fly boxes.

I'd describe the action as medium fast. I have a six-foot (and a bit) spinning rod blank that's been converted to fixed line use (by the simple expedient of including an end guide) and the Tiny rod is much more flexible. I played that chunk of ice like it was nothing.

I'm going to test it again today in tighter quarters.

Five feet is short for a regular fly rod, never mind a Tenkara rod. You lose a lot of leverage. Against this is the potential for using it in the squirreliest conditions. I have one brook trout stream in mind specifically where there isn't room to swing a cat, not that I do a lot of cat-swinging.

Because of the extreme portability of this rod, I see it as the supreme backup to a longer rod, Western or Tenkara. 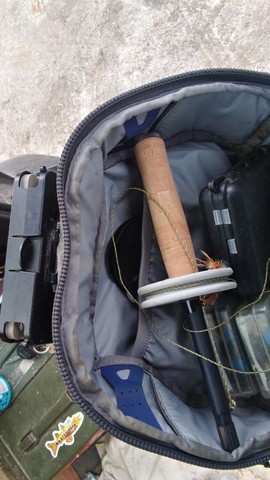 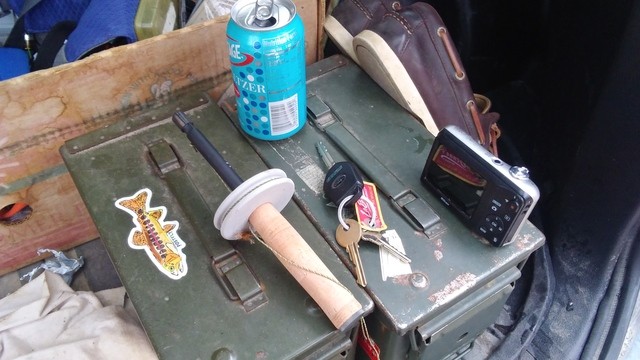 He has an eight-footer too.
P

Caught a couple of super-dinker browns in the Riga brook with the Tiny today. I need to find a better line. The furled leader is too thick and the knot holding it to the lillian comes undone. It's not designed for this, it was a stopgap. I would have stayed out longer and fiddled around with #3 level line or something but I have to go do something for work. Stupid work.

I've been playing around with the Tiny Ten as weather and conditions allow.

I tried it with a chopped down Bushi line (from 10 feet to about seven) and with #3 level line, but the winning combo is a furled leader for fly line weights 0-3.

I've used both the 50 inch and 68 inch, depending on where I was. Given the high likelihood of bow and arrow casting on one brook trout stream in particular, and my relatively short arms, I suspect the 50 incher will be the standard for the rod.

I caught some rainbows in the 12-16 inch range with it recently. Added about three feet of nylon 4x and a small panfish popper to serve as indicator; heavy nymph under that. A little sling-shotty at first but serviceable.

Also did a two fly rig with a soft hackle and unweighted nymph,which was successful. Probably more like what the maker intended.

Looking forward to sticking a dry fly here and there as the weather warms up.

Portability is a huge plus.

And handling those rainbows on what amounts to a high tech tomato stake was a blast.
P 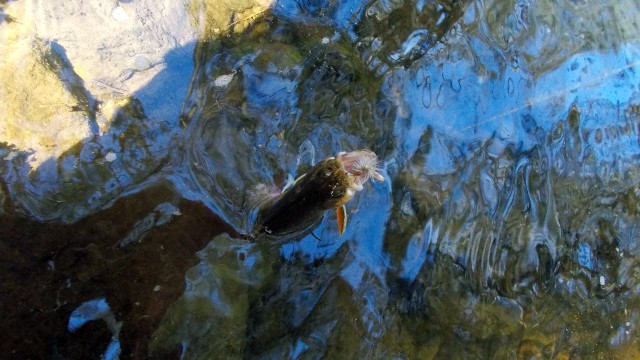 Here's a decent brookie from late March, from a super secret stream here in NW Connecticut. I've been putting the Tiny through its paces in streams that are more conducive to a rod that size. It is definitely a better dry fly rod than subsurface. I've taken to sticking it in my Vedavoo sling, where it really isn't in the way. Half the time I forget I have it with me.

I switched to a slightly longer furled leader, 68 inches, but still super light. Next I am going to try a furled leader that's for fly lines 3-5. I suspect the added weight will make the cast a bit more forceful.

Usually the fixed-line rod comes out when I need more reach than the short fly rod can provide. With the Tiny it's the opposite. I'm carrying a 7 1/2 or 8 foot fly rod into the blue lines, and deploying the Tiny when I have successfully snuck up on a run or plunge pool.

One of these days I will use the Tiny exclusively and see how it goes.
F

Tell me, why do you like Tenkara style? In my opinion...it is super micro fishing...
P

Back in the 70's I used to frequent small blue lines in NW CT with a 6' fiberglass rod and a tuna can Martin reel. It was a lot of fun.Probably never casted further than you can with the Tenkara rod on those streams, a long pool was maybe 12'. A lot of crouching and crawling to get in to position.
Did not have Google in those days just looked at paper maps, drove the backroads and walked the trails to find those streams.
P

I've got three such streams within a 15 minute drive.

Usually I bring a short fly rod, most recently a 6.5 foot 3 wt Aventik fiberglass I overload slightly with a DT4. Housatonic River Outfitters ordered up a dozen or so and I bought one, mostly out of solidarity because I already had half a dozen rods suitable for the purpose.

And if I feel like toting the Umpqua chest pack/day pack rig, I will stick a fixed-line rod in there with my lunch and water. Lately that's been the Dragontail zx340 zoom, which fishes at a little under 8 feet, about 9 1/2 feet, and about 11 feet.

Often, when you really get down in the ravine or gorge, there is abundant room for a back cast. You could do it with a nine foot fly rod, but I like my method.

If I use the sling pack I stick the Tiny Tenkara in there. That's going in the opposite direction; I'd probably bring a slightly longer fly rod in that case.

Tenkara is a lot of fun. I've got some big clunky rods designed for carp and baby alligators and whatnot that I use for largemouth bass. But most of the time I use smaller fixed-line rods for spooky brookies, where a light touch is the difference between success and failure.

Although two days ago I was swinging wets with the Dragontail in the Esopus, with spectacular results. The silver bullets really feel like monsters.
Last edited: Jun 9, 2020

I have used my Keiryu rod to nymph (like Tenkara but no cork and designed for weight&bait) fish the Pit river which is all pocket water between big boulders on Pit-3 reach. Caught big bows over 16" with no issues. It is a lot of fun and it allows me to retract the rod and use both hands to climb over the boulders (without a rod in my teeth) when necessary. Useful when going through heavy brush/small trees too.
P

Sam Kates (Tiny Tenkara) had a fire and the shop is closed until further notice.

Yes, it probably can.

This page feature the Tiny Tenkara fishing pole. It is used for micro-fishing and on small mountain streams. Tiny Tenkara is Colorado based company.
tinytenkara.com
J