Today is the Day

The day that the future of the striped bass fishery will be decided
Historically the Atlantic States Marine Fisheries Commission (ASMFC) has not done the fishery any favors, bowing to commercial interests.
This time may be different. There's been a strong push to reduce the creel limit to one fish of 35"minimum, and one fish of 18" minimum in the Chesapeake
We'll see what happens

A beloved N.J. fish is in big trouble. What’s next for striper fishing? - nj.com

Are you hopeful or pessimistic?

The striper fishing this year along the ME/NH coast has been pretty ordinary. Certainly the worst of the past five years.

My understanding of the declining Striper population is less due to overfishing of the species, and more due to over harvesting of the species forage. In the Chesapeake, there have been immense commercial harvests of Menhaden for use in the fish oil industry. So if the bait fish that sustains the Stripers for much of the year (especially pre and post spawn) is decimated for vitamin supplements and dog food, one could conclude that the populations of Striped Bass will eventually decline if all other variables remain in check. I can not substantiate this as fact because I am not aware of studies to prove this point. I have been involved in discussions with Striper fishermen that support this assumption that the current decline in forage has a measurable affect on the species’ numbers. I believe the smart thing to do is allow each state to declare “sportfish” status on their own terms. Let us also based on solid scientific evidence, measure our commercial baitfish catch for health products and apply appropriate limits on that fishery as well.


Sent from my iPhone using Tapatalk 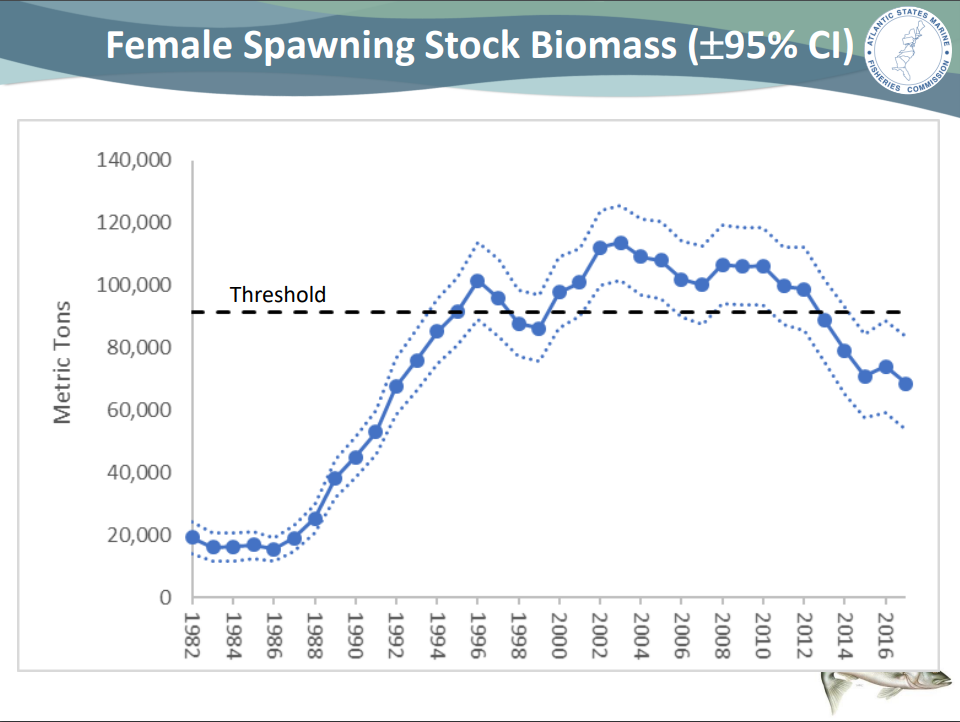 The Addendum reduces all state commercial quotas by 18%, and implements a 1 fish bag limit and a 28”-35” recreational slot limit for ocean fisheries and a 1 fish bag limit and an 18” minimum size limit for Chesapeake Bay recreational fisheries. States may submit alternative regulations through conservation equivalency to achieve an 18% reduction in total removals relative to 2017 levels.

the Addendum (also) requires the mandatory use of circle hooks when fishing with bait to reduce release mortality in recreational striped bass fisheries.
Click to expand...

Reactions to the decision have been mixed, with some applauding the decision, and others questioning the effectiveness of the ASMFC’s Striped Bass Board at representing the interests of individual fishermen, given that the majority of public comment supported the 1 fish at 35 inches or greater option.

Despite the board’s decision, we won’t know the regulations for each state until February, when the board will approve proposed options for “conservation equivalency;” in other words, regulations that differ from the 28- to 35-inch slot limit that still achieve the 18% reduction in recreational harvest.
Click to expand...

And there is a n organization dedicated to protecting bunker:

A couple of weeks ago while I was out on the East End there was as guides' meeting to discuss the merits of the 1 fish and slot limit and they agreed it would be an improvement. A young guide I was out with a couple of days ago on the North Fork put on his web site that NO bass of any size would be allowed to be harvested on his boat. In my opinion a complete moratorium on any harvest, commercial and sport, would be the only real solution.

I have my own technique; I'm attending some social function and somebody introduces me as a fisherman. Immediately a bevy of lovely wives gravitate to me in the hope I will catch them a fresh wild fish. I explain, "Don't you know that every stripped bass is loaded with PCBs, Dioxin and a cocktail of additional toxic carcinogens? Eat these fish or take a get-cancer pill, your choice." Of course, they run to the other side of the room but hopefully take what I say seriously.
F

The Captain I use to fish the NY Bight and surrounding areas is Capt. Paul Eidman (Reel Therapy). he is the founder of Menhaden Defenders. Good guy!

I listened to him and I think his father present about their organization at the NYC showing of the FF Film Tour last winter. Many species rely on bunker for sustenance and the biggest harvesters within US territorial waters are the Russians and the Poles.

The menhaden reduction industry, specifically one notorious company in Virginia – Omega Protein, which accounts for over 70% of menhaden landings along the Coast – had essentially thumbed their nose at the Commission and willingly exceeded a cap on landings in the Chesapeake Bay, put in place by the Commission several years ago.

The intent of such cap, which was based on the prior 5 years’ average landings, was to avoid localized depletion and the effects large-scale harvest might have on the Bay’s ecosystem. I don’t think we need to mention it here, but menhaden is of course one of, if not THE most important forage source for striped bass, bluefish and just about every other marine predator with fins or wings. So it certainly makes sense that if you take an extraordinary amount of menhaden out of what is THE most important estuary on the East Coast, there will be negative effects.

Yet, there has been push back by Omega on the cap from the beginning, claiming that it wasn’t based on science, that it wasn’t necessary for the conservation of the species etc., all things that are intuitively incorrect. A complicating factor here is that menhaden is managed by the Virginia state legislature not Virginia’s Department of Marine Resources. As big companies often do, Omega has been able to “influence” legislators and there hasn’t been a successful vote to codify the cap. Thus, their argument was that they could exceed the cap and still be well within the law.

That’s not true though. Virginia is bound by Atlantic Coastal Fisheries Cooperative Management Act, and should such a state be found out of compliance with the fishery management plan the decision gets bumped up to the Secretary of Commerce, which, if it agrees with such a finding, could declare a moratorium on menhaden landings in the state until the state comes into compliance.

A few notes here. It’s good that the Commission had the guts to stand up to Omega. There was certainly a question as to whether or not it would. The Commission is rightly worried about whether or not the Secretary of Commerce will undermine it’s decision, given it’s acquiescence to New Jersey after a non-compliance finding back in 2017. That was the first time ever a Secretary of Commerce didn’t support a compliance finding. And it sure appeared like it was a political favor for a Governor with a good relationship to the current Administration.

What happens this go-around is anyone’s guess. But we’re hoping that this Administration will see the folly in allowing a Canadian owned company to thumb its nose at the Commission, and pretty much tell us it’s gonna do whatever it wants. It would be good if some of these recreational fishing organizations with strong lobbies on Capital Hill started pounding on some doors (i.e. ASA, CCA, TRCP etc.) but it’s anything but certain that will happen.
Click to expand...

A jumping tarpon is the iconic image of saltwater fly fishing. However, striped bass is the species that put saltwater fly fishing on the map. Stripers are the everyman’s fish. You don’t need to invest $100,000 in a boat and gear to catch them. They can be caught from shore, a boat, or a kayak.

Fly anglers from North Carolina to Maine base their year on the striper migration. At this point in the game, you probably know that stripers are in trouble again. The population was decimated in the 70’s and 80’s. It wasn’t a water-quality problem, and it wasn’t a “cycle.” We simply killed too many of them. And, as humans tend to do, we let it happen again. Striped-bass stocks are measured on Spawning Stock Biomass (SSB). In layman’s terms, the stock is measured on how many spawning-age females are in the system. Male fish don’t count. The SSB is currently at a 25-year low and is falling off a cliff.
Click to expand...

Let's stop the nonsense and make those 7-stripe wonders a game fish only. Clamp down on all who violate the regs/laws, and bring back a sustainable set of regs after the stock if fully replenished.

I am curious about this Menhaden issue, so went to the Omega Protein website. It appears this company is in denial of allegations they violated the rules, check it out here ........

The U.S. Department of Commerce has upheld the Atlantic States Marine Fisheries Commission’s (ASMFC) finding that the State of Virginia has failed to comply with the Chesapeake Bay menhaden harvest cap, setting in motion a moratorium on harvesting the forage fish beginning June 17, 2020.

“This is tremendous win for all of us in the recreational fishing industry as well as the species we all know and love as fly anglers that rely on this important forage fish species,” said Ben Bulis, AFFTA President. “We’re proud to have voiced our industry’s strong support of ASMFC’s recommendation to Secretary Ross." Angling Trade News
O