There are some world famous trout streams in this region but I am confused on how to fish them- some of the streams seem large. Are boats used mostly or or there areas to wade? Or, let me state it a different way. A few years back I finally got to Henry's Fork in Idaho. There were a lot of weeds floating in the water and trying to wade around Harriman Park- you sunk in over your knees- it's a river in which you need a drift boat (in my opinion)
So...what's the best way to tackle the famous waters in Arkansas/Missouri for trout? And, best time of year? Thanks. I plan to tent camp- any good spot recommendations also appreciated.

The white river system, especially Taneycomo in Branson and the White below Bull Shoals, is absolutely amazing and can fish so many different ways... all depending on water release and generation. I used to live in the area and many days would be wade fishing on dry land in the middle of the river only to have the horn blow (signaling extra generators kicking on at the dam) and be drifting over 4 feet of water in the boat no more than an hour later. The Norfork River can give a completely different look sometimes as well. You can’t throw a rock in the area without hitting a decent fly fishing guide and there are a bunch that would be easy to recommend.

It really won’t matter though, pick a guide for a day and learn the ropes. Then rent a boat, fill your box with scuds, San Juan worms and midges and go catch a bunch of really nice trout.

As far as tent camping, I think the area just below Bull Shoals dam has availability and is a good location close to the town of Bull Shoals AR.

The following statements are EXTREMELY general and I hope those more familiar with the area will provide additional insight. Time of year doesn’t really matter other than the spawning season of Nov-Jan where the access is closed for the first 2 miles below the BS dam to protect the spawning browns. Generation schedules are typically more predictable in summer and you might even get some hopper action near the banks. Fall is when you can get some huge fish to chase streamers and there is nothing like that. Winter and spring are great for numbers with the flies I previously mentioned.
F

I'm pondering a trip to the Branson area myself, and so I'll speak to Taneycomo. From my research (not actual experience), wading is the principal issue. A lot of people do it successfully because they can beat the generation. Verify this, but I think it's fairly common for generation to be low in the mornings and that gives a window for wade fishing.

There are supposed to be a couple of feeder creeks/hatchery outlets near the dam that attract waders during high generation, if you don't mind fishing around large number of people.

Truth be told, the best way to do either tailwater is to float it. You definitely need a guide if you're on upper Taney and want to fish the trophy area closest to the dam. There's a lot of hidden rocks, snags, etc. that one has to learn to boat safely. A guide will know the dangers.

Missouri requires non felt soled "non porous" boots in the areas you are planning to fish. So rubber soled waders or wading boots only.

Note: To minimize the spread of didymo, porous-soled waders
are prohibited in trout parks and certain streams
as specified on pages 18–20 and 29–40.
T

I think all of the White River tail-waters are wadable at times, but I would not plan a trip around that; I'm 40 miles from the Beaver dam and 70 from Table Rock and never fish either anymore. Too much wasted drive time, only to find lots of water flowing.
Little Rock District > Missions > Water Levels > Real Time Data (Reservoir)
USACE owns these and publish data on current generation in the above link, but long experience with the Beaver tail water particularly taught me that they frequently open up more water anytime of any day and the only warning is the horn- if you are close enough to hear it. I have also driven the 150 miles over to the Bull Shoals tail twice and both times found they had increased flow to double the projected numbers.
The best source of current information is the forum named above by FFM,
Silver brings up a good point about the felt too, Mo. was one of the first to jump on that wagon and although they have abandoned the boot wash stations they built at all trout waters, they still have the felt ban going.
Both USACE and USGS have stream gauge info on the net.
USGS Current Water Data for Arkansas
Little Rock District > Missions > Water Levels > Stream Gages (Tabular)
B

I have little experience in the White River area that would help but as far as Felt in Missouri the streams I have fished felt wasn't needed.
There are other streams to fish that aren't controlled by the electricity needed by people. Roaring River State Park and several other rivers and creeks are available to wade in Missouri and Arkansas. The Ozark Angler site has a lot of them listed and is a great source of information.

If you are thinking of fishing either the Norfork or the White below the dams, which by the way, are both great waters, I would strongly suggest you use a guide for a day at least. Wife and I fish there several times a year. I would suggest Larry Babin as he can work with wading/drift boat and high water with a power boat.

Here is a pretty good brown from the Norfork (Northfork): 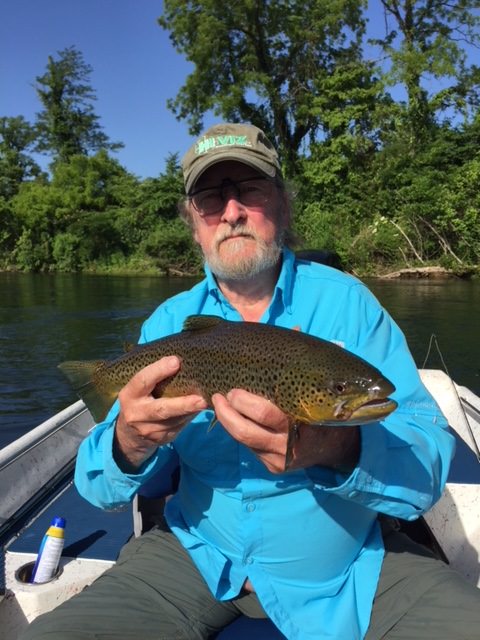 And this is a pretty good Brown my wife caught on a hopper just below the White River damn: 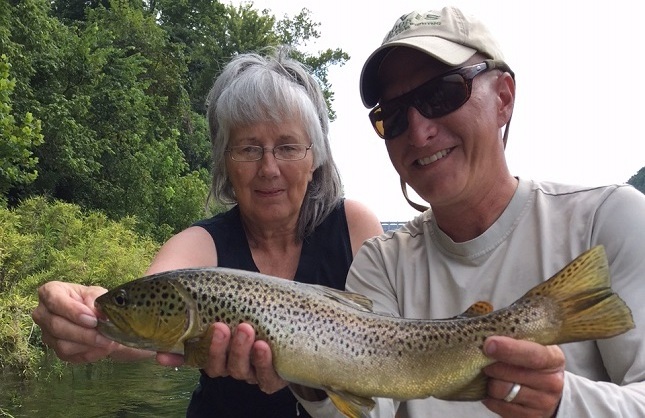 The other option might be the 11 Point out of Salem MO. There is wading there but it may take a boat to get to it. We have fished it with a canoe and had pretty good results. Its a spring fed river that has good fish. We used a local guide (Bryan Slosh(sp), I think was his name, Google guides in Salem, MO. You can rent a canoe at Salem and drift the river yourself but I would warn you there were/are sweepers along the river.

Just some thoughts....
B

Brian Sloss, Eleven Point River fly fishing guide/cottage rentals 417-270-2497. Is a good source of information and would probably be willing to help. Canoeing the Eleven Point is about the only way to go. There aren't that many gravel bars on the Elevenpoint and the river has some deeper holes. It is a beautiful river that hasn't been as touched by man as most of the rivers in Missouri.

There's several shoals in the first 15 miles or so below BSD that are quite wadeable at minimum flow. The river's a large one, but then that means the shoals are pretty good sized too, and worth exploring. Close to the dam is wadeable water that has been recommended to me, but the two times I've spent in the area were at Thanksgiving and they were closed for the brown trout spawning. Just down from there is the state park with a wadeable shoal. A few miles downstream is Wildcat Shoals, a good sized shoal area. I have spent several hours there with good success. Cotter has an access you can wade. Below there some ways is Rim Shoals, a quite large shoal area with good wading.

As others have mentioned, hiring a guide is probably the safest approach. Most of the fishing is done from boats. I've been lucky and found good sections of time they were running minimum flow (spent a week there, twice). Wildcat Shoals and Rim Shoals were the best, and very good fishing. These I've mentioned are all below BSD. None are wadeable as far as I know except at minimum flow, but then they're excellent fishing. Norfolk has excellent fishing at minimum flow close to the dam and down a few miles at an access called "Handicap Access" or something like that.