Hello, should I use wax (grafitolin from Loon or some other) on my ferrules? It holds firmly, but I’m worried about the wax catching dirt and damaging the ferrules in longterm use. Thank you!
B

I rub my ferrules with a candle about once a year, rub on and polish with a soft cloth, never had one stick, fly apart nor wear. You only need to do the male spigot. I did have a problem some years ago with a Daiwa rod that kept shedding the top section but a casting lesson showed that it was my casting at fault, not the rods.
W

I used to on my glass rods, just candle wax, not on my graphite rods.

No. But if you must a little nose grease goes a long way.

I use it a couple times a year, just a habit I guess. Regular candle wax for me, nothing special. I have a very small container in my vest with a chunk of it.
S

Hayden Creek said:
No. But if you must a little nose grease goes a long way.
Click to expand...

I would think wax would cause a stickyness. I would think an oil, grease, Teflon etc. would be the way to go. Or you could use nose grease.


Sent from my iPhone using Tapatalk

I use the Loon Graffitolin in two of my rods that did come apart regularly, worked like a charm. Only need a very small amount and it lasts a long time.
T

Nose oil was said to be why many metal ferrules failed, acid etched them, but I guess on plastic that wouldn't be a problem, plastic probably won't leave a black streak on your nose either that used to distinguish the nose oilers.

Candle wax is usually paraffin wax if the candle is hard (many soft candles are made of soy and some have bee's wax mixed with) and that is basically very heavy mineral oil, so a lubricant, but being very thick it can also keep ferules from turning under torsion of repeated roll casts or from closing too far on worn ferrules or keep the ferrules from coming apart while casting. When Fenwick invented 'glass to 'glass ferrules they printed right on the rods to use paraffin on the ferrules. Many other rod makers have also suggested paraffin on ferrules and of course some rod makers have not. Fenwick also printed "twist on and twist off" on those early 'glass to 'glass rods and most manufacturers say never twist.

Most important is to keep the ferrules clean and to check them periodically while fishing.

Having, in the distant past, lost top sections, split female tip-over ferrules when they became loose and had metal ferrules stick, I learned to use paraffin as a habit and personally I don't believe it can do any harm to any rod. Begin by cleaning the ferrules (I use propanol) then as bumble54, I coat the male well with a candle, then scrub it off with a clean cloth or chamois leaving only the thinnest film. I keep a birthday candle in my vest and and apply a few strokes of paraffin when setting up the rod for the day. Peace of mind for me and I haven't had a ferrule problem in many years.
Bee's wax is recommended by some for badly worn ferrules, but I would not use it at all because it's sticky nature invites dirt.
In the end it's your choice. (I still recall those two cast off tops, the split ferrule and the rod I broke try to un-stick. Every birthday party I grab a candle.

This isn't something that I've ever given much thought as a potential problem. However, I'm with trev, rods need periodic maintenance too. Seems to me it might be worth cleaning the ferrules several times a year if wear from dirt is a concern. Folks clean reels to remove dirt and other contaminants, so same should apply. Then use whatever you like on the ferrule if you feel you need. I too have always just used any candle wax that I had, nothing special, and "dirt" will always be present in some form, and will get on a rod, and in ferrules even if you don't use wax.

I didn't use anything on my metal ferrules until I discovered Silver Trout products on Per Brandin's website. My usual routine was to wipe the male ferrule with a cloth and clean the female with a q-tip. Now I apply the paraffin before assembling the rod and clean it off after taking the rod down. I clean metal ferrules with isopropyl alcohol being careful not to get it on the varnish.

Nose grease may be okay for fiberglass or graphite ferrules but I would be hesitant to use it on metal ferrules as the salts may cause corrosion.

Do not use any nose or ear grease on any ferrules.

The problem is that salt from sweat or dust from the air get deposited and that is why this "grease" can feel gritty at times. Although composite tip over end ferrules will not rust or corrode, they do get abraded. Use paraffin or candle wax.

The reason to use a wax is to prevent ferrule "lock" in which ferrules cannot be loosened.

I don't know man. 50 years of using nose grease with all types of ferrules and never had an issue. And my dad before that and grandad before that and... Keep em clean with regular maintenance is key. Would love to see evidence to prove me wrong but until then it's just as Trev said, " it has been said".
If I had a buck for everytime I have heard that and it wasn't correct.

No graphite fly rod manufacturer that I know of has ever said to use body oil on a ferrule. All either recommend clean candle or paraffin wax and Winston adds to avoid grit.

"Periodically wax the ferrules (where the rod pieces separate) lightly with paraffin to ensure a firm fit and proper function." 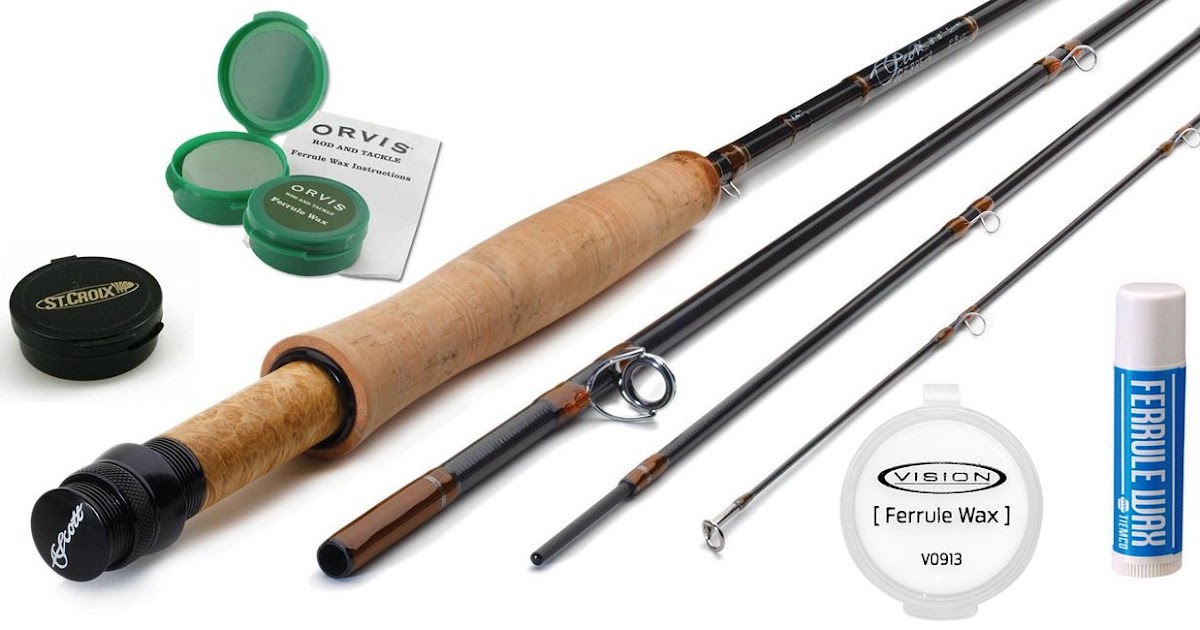 Let's start from a simple fact there is such thing as rod ferrule wax. It is sort of a paraffin wax to lubricate rod's joints. Most people...

"Over the season apply ferrule wax (included in all new rods) or regular candle wax to ensure a snug fit. This will greatly reduce your chance of a rod break."

"Paraffin wax can also be used on the ferrules if needed to ensure a proper fit. "

"Cleaning and Lubricating Glass and Graphite Ferrules… Clean the male portion of the ferrule with a soft cloth moistened with rubbing alcohol. Rub the male slide well to remove any dirt or old wax from the surface. Finish by drying the ferrule with a clean, soft cloth. After the alcohol has dried, apply a light coating of white candle wax to the entire surface of the male ferrule."

Never imagined they would recommend it. Just sharing my own experience and evidence.

This is from an older post but most of the links are still good.

Multiple references from rod manufacturers and rod builders document what you can and cannot use for ferrule lubrication. Lubricate composite ferrules with paraffin and metal ferrules with nothing or soap. Some links do say not to use oils from your body like nose oil.

“never use grease or oil and never rub a ferrule alongside your nose or ear. Greasy substances cause suction in the ferrule and also attract dirt particles. Fiberglass, boron/graphite, and graphite self-ferrules should be lubricated with paraffin, metal ferrules with dry soap.”

“Congratulations on the purchase of your new bamboo fly rod. We have included some information to help you keep your fly rod in its best possible condition for years to come. …Do not apply any oil or “nose grease” to the ferrule.”

“The use of the old fisherman tail of lubing ferrules with your nose oil will corrode and collect dirt in the female ferrule.“

When putting a rod together you will often see folks rub the male ferrule against their nose. It’s not a good idea. There’s not only oil on your nose, there’s salt too. Salt can cause corrosion on the ferrule. Some folks have body chemistry that’s worse than others.

“you should avoid the traditional earwax, nose grease or anything with a petroleum base”

I've never had any problems with ferrules on my graphite rods, but have used paraffin on a cane rod ferrule. Using body oils to lube ferrules on was not something I did, but once I did use nose oil to shine up a pretty wooden reel seat insert to show it off to someone.

silver creek said:
No graphite fly rod manufacturer that I know of has ever said to use body oil on a ferrule.
Click to expand...

My wife and I have a few bamboo rods that we purchased directly from the maker. All of the rod makers warned us against the use of "precious bodily fluids" for ferrule lubrication. Per Brandin's site has a nice page on maintenance of cane rods. I wished I owned one of his.
D

This is quite possibly the oldest chestnut on the Forum,so let's be brutal here
As trev,Silvercreek and others have mentioned DO NOT use oil from any part of your anatomy on a fly rod,but do use parrafin wax on the male ferrules periodically, as it not only assists on keeping the rod sections together but (sometimes more importantly) makes taking the same sections apart after they've been assembled for a period of time (like two weeks on Kiritimati).
I've been witness to some weird and wonderful methods to disengage rod sections (application of frozen Peas etc.) but the best method to take a rod apart is the two-person overhand direct pull. NEVER twist a rod to get it apart,and avoid storing assembled rods as best you can..Good luck!
You must log in or register to reply here.
Share:
Facebook Twitter Reddit Pinterest Tumblr WhatsApp Email Link
Top