Here's as good as it's gonna get! 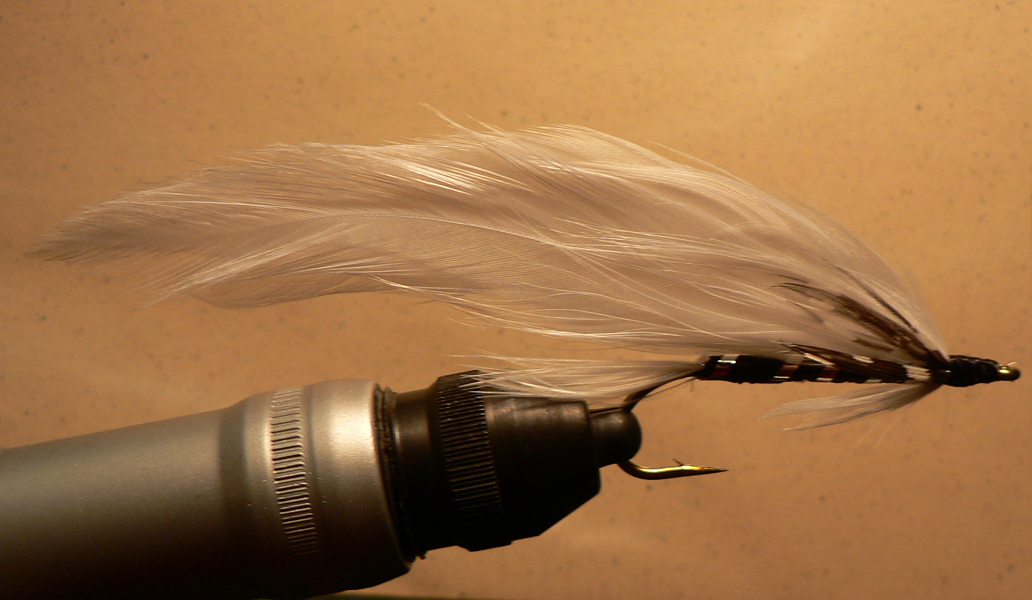 The cheeks are guinea that I tried to improvise with, since the shop had neither jungle cock or the imitation. They had the paper things, but I passed on them.

I ordered jungle cock nails a week ago... still waiting.

hi guys
i didnt had jungle cock so I used that imitation .I must say that is money for nothing .It is simple to make,you just need soft black feather ,any kind, and white and yellow nail warnish.Metz used that,so you can too
Last edited: Apr 16, 2011

My Black Ghost. It's also got imitation JC (mylar). Yuck! I like the paint the black feather idea.

Ant, That will definitely work for you! By going with a 2-3x wing, you did the same thing that Laurie did with his tie. I like the Guinea Hen cheeks and the lighter tail and throat.

Jimmie, That looks good! Nice job on the ciger-shaped body. A lot of tyers will only tie this pattern with a flat cylinder body, but I like the moderate taper shape that you got with your tie. The wing looks well-paired and the mylar JC eyes work for me. In the water, the fish will only get a glance at it before they strike or pass. Originally, JC nails were supposed to imitate "eyes"on these streamer patterns; all of which, in turn, were designed to imitate baitfish.

I have been struggling to figure out some material substitutes... but I will get something out!

My order shipped Fri so I'll tie mine some time next week.

OK, so I had no black thread left, no white feathers and no jungle cock... so this is my improvised version...

twfitw, I like the substitutions. The black wing goes well on this pattern and the Guinea Fowl pairs nicely with the ribbing. I'll bet it will fish well for you.

Hey great flies everyone. I'm sorry that I dropped off here, life got in the way of my vise time over the past couple weeks.

Is the Ghost the last one, Allan? I really appreciate the tutorials, I'll come back to these when I need a refresher on these classics. Thanks for running this show and to everyone that shared their work!

Thank you for the great tutorials Allan! Here are a few pictures of fish caught today using the Picket Pin that was tied for this.

Nice fish, glad you got to try that fly out. I don't have trout locally. I can go a little over two hours away to trout fish though.

dean_mt, Yup, the Black Ghost was the last pattern in this tie-along.

FlyTyer, Nice fish! Thanks for sharing it and for providing some clear evidence that the older patterns will still catch some really nice fish.

Kelly, You can actually use the PP for a whole series of different species. Any fish that feeds on smaller baitfish (which is most of them), will take a shot at a streamer like the PP. I've used it successfully on the Susquehanna for smallmouth bass.

I think we're pretty much at the end of this tie-along now, so here's the tally for patterns tied. We had 25 people in this tie-along:

Feel free to post if you're stilll working on any of your patterns. As you know by now, we all love to see the variations that are possible with these patterns.

Great flies everyone and thanks for joining in! We'll have to do it again - maybe nymphs / maybe dries next time!

Flityer - Nice fish... and I have to say that I like the idea of posting pics of fish caught using these flies! I will definitely take some pics as soon as I am able to get to the fish... hopefully tomorrow the ice will be gone!!
K

Pocono, I really enjoyed the experience of this tying series. Thank you for all the hard work you put into this.

I hate to see this come to an end. There were some really good information exchanged with the various ties. Some of the variations were as good as the originals as far as I am concerned. We had tiers of all levels and I think everyone learned something from your superb tutorials. Thanks again for taking this on.

I'm gonna try this again since I really struggled with parts of this fly.

Mudbug, If that's your first Black Ghost, then I'm really looking forward to seeing your second one! I think it came out very well for you; it will catch for sure.

A couple of ideas. I'd thin the body just a little, let the wing go 1 1/2 times the hook length and, maybe, shorten up just a tiny bit on the JC nail. With that, you'll be closse to a classic tie.

Pocono said:
Mudbug, If that's your first Black Ghost, then I'm really looking forward to seeing your second one! I think it came out very well for you; it will catch for sure.

A couple of ideas. I'd thin the body just a little, let the wing go 1 1/2 times the hook length and, maybe, shorten up just a tiny bit on the JC nail. With that, you'll be closse to a classic tie.

Thank you for the nice words and tips.

I didn't have any uni-stretch and I didn't want to used a mile of black thread to create the body shape, so used some Coats & Clarke thread, I guess I went a bit overboard with that before covering it with my black thread.

My biggest struggle though was with the wing and it was caused by my materials. I just bought a bag of chinese strung saddle and didn't think about the fact that I would need two sides. pairing up the four pieces was a pain and took lots of work to set "OK", it's not even close to what I want.

I guess I need to buy an actual hen saddle.

Oh, also I tried to make my rib more sparse like yours but it kept slipping, it seems that my tinsel is a bit of a show hog, it insisted on a 50/50 mix.

That Uni Stretch is easy to source and you can use it for doing a lot of different things on flies since it's nylon-based. I use it mostly in white. Here's a link that will get it to you in under a week:

Yup, you need a good saddle. You should pick it out yourself because not all saddles are created equal. Ideally, you want a Rangeley streamer saddle; one where the feathers are a little on the limp side. The limpness lets the feather "hang" just a little, which is what you want in most of these patterns. It's the main reason that you need 4 feathers to form the wing. The limper feathers are more translucent than opaque. To get a nice white wing, you need the combination of the 4 feathers.

You also want a saddle that has a clear curvature on both sides; the feathers on both the left and right sides curving in slightly toward the center. Sounds hard to source, but it's really not. Most stores that carry fly tying materials will let you take the saddle out of its plastic cover and examine it closely before you plunk your money down. I source them from www.feathermc.com I'd give you a direct link to the saddles, but their site seems slow to open this morning; maybe they're working on it.................

Woops! He's out of them; looks like for the long term:

I'll see what I can dig up and get back to you on them. I've used Whiting American rooster saddles before and they also work well.

Unfortunately, as you'll read, you're now competing with the hair extension crowd and it looks like they're winning!

The orange spot at the tip is supposed to imitate the eye. But, a lot of tyers like to show more of the JC nail, so both the orange and the white spots tend to be seen on most patterns today. Historically, you only saw the orange tip spot most of the time.

The angle of your first wrap of tinsel pretty much determines the angle of all of the others as you wind your tinsel up toward the head. So, if you want it sparser, then start your first wrap at a shallower angle. Also, with a less pronounced cigar-shaped body, there will be less of a tendency for the tinsel to want to slide. One more thing, keep the pressure on the tinsel until you have it tied off at the head. Otherwise, it will slip on you. So, keep the angle constant and keep the tension on until you've got that part of the tie completed. Those points should tame the show hog for you.

Good luck, we're all looking forward to your next tie!