Where did you fish today? (This week?)

We have a thread on “What did you buy today?” that has gone for a gazillion posts and is often on the first page. We have many, many, many threads on what rod to get. And nippers. And pliers. And gear bags.

The posts on gear are many and go on without end it seems.

Do you fish? Or just talk about it?

I’ll admit that I don’t fish that much. 15 or so days per year on the flats and maybe 10 or so on streams and rivers here in Kentucky. But I love to hear about others adventures. Pictures are nice too!

So, how about it? Where did you fish today? Or in the recent (within a week) past? You don’t have to hot-spot anything, maybe just “a local river here in central ____,” or something like that.

Can we make this thread go on and on like we do the gear threads? Do we fish? Or just buy gear and talk about it?

I’ve got nothing today, but will post up in a couple weeks when I get back from my next adventure. Hopefully with some photos.

Was it last Sunday Morning I drove out to the local surf for the first time this year to wet a line? Persistent onshore winds kept me away from the surf all summer so far, that and the other stuff, I’m everyone’s errand boy these days or so it seems. Nice to be needed, Anyway, Water on the first beach was murky and full of wood debris thanks to freshwater runoff from the super abundant rains. The second beach was better, water more clear and almost zero wood, just a little sargassum, but then with a few random breakers to keep me on my toes, literally. Saw some bluefish breeching the surface after unknown small bait. I then shortly thereafter caught one of the bluefish on a tan Borski slider and just a 15# fluorocarbon tippet. Sometimes, you get lucky, normally, bluefish part plastic that diameter like a hot knife cuts butter. About that time, several Lightning bolts striking the water out a couple of miles seaward encouraged me to relocate. Drove around some, up the beach several miles and later, a speckled trout came to hand on the first cast of a topwater plug. Both of the fish joined me for dinner.

Walked about 600’ of the lake bank one day, Monday I think it was around lunchtime. Caught a few eager and saucy LMB on a mostly white deer hair diver. Those jumping fish all went back into the lake. Pretty much has rained all day everyday since then.
P

We christened our new Super Duper Puma on the Yellowstone Friday. Caught four whitefish and a couple of rainbows.
O

Guilty as charged on both counts! Throw the book at me when I’m not fishing and I’ll probably read it (if it’s fishing related).

I’ve been on 2 week shutdown (nice vacation time) until today so I’ve been doing a great deal of fishing, admittedly at the expense of my overly ambitious to-do list. I did actually mow, get the wildflower garden arranged, and begin to organize better the garage and flytying room so I don’t feel like a completely worthless POS.

Creeks kinda blew-out in the rains, so I simply ply the stillwaters of my area. Gravel pit ‘gills and LM bass have been the main catches, nothing remarkable in size, but numbers have been great and I’m a light flytackle enthusiast so couldn’t be happier. Did explore more of a newer pit to me, it was once a superfund site recently reclaimed and open to the public. Has intriguing potential and even pulled 3 smallmouth out of there two days ago. No idea if they were (secret DNR) stockers or just made their way in during years of flood waters. Suffice it to say I like these kind of mysteries. Especially in lakes with a huge shad population, topminnows, and giant midge shucks all over. BMB’s and Paddlefish in there as well so who knows.

Probably head over there today as I’ve given up on any of my to-do list despite it’s ever increasing length. I really, really gotta route that separate exhaust pipe for a new water heater soon. Mine’s really old, codes changed, and we can’t run two vent pipes into one anymore. Gonna be F’d on this one, I can feel it, but I guess I had fun and caught a buncha fish instead. Building code changes suck sometimes.

I fish local and (probably) too often. Even ran into a kayaker friend from work on the pits and have recently become obsessed with the idea of getting a fishing kayak so this situation is just going to get worse in both slacking homeowner responsibility and more gear talk on the forum.

(yes, the aforementioned garage cleaning thing was mostly inspired by where I could potentially store a new kayak and accessories).
O

3 days ago, famous colorado tailwater.
guys were leaving complaining how there were few resident fish were left.
not me: I dont give up....

Well, fished with Ard in Ak, Fishing with bamboo maker Mr. Norling on Tuesday morning on a WI spring creek, Then up to Bayfield WI on Friday, swinging flies, I probably will Kayak out on Lake Superior and then its spey casting for smallmouth where I grew up between St. Cloud and Little falls and then its off to Escanaba MI, invited to the spey clave, hanging with friends The OPST guys will be there and get in some fishing, and then its the south shore for swinging flies for lake run browns and kings, more spring creek fishing on the driftless and then its Coho and Steelhead season. and that's the end of the season until January 1st 2022.

This week talk but next week Key West
O

bonefish41 said:
This week talk but next week Key West
Click to expand...

This week was fishing local Southcentral Alaska streams for rainbow. The kings are spawning. Trout and char are active.

This is going back a week but I fished here

Since that day it’s been pouring buckets! 🪣
Yesterday we had sun but I brewed beer while the waters calm a bit. Today the in-laws are in town. Hoping to be back out there tomorrow

Over the past two weeks, been fishing every day except for two (got rained out). Been out at the Au Sable and Manistee. Also, visited a few inland lakes for bluegill. Tried to get a picture of the fish that ended up being the best for this expedition. It was a big Au Sable brown. Fish pic didn't turn out great, but I'll share it anyway.

karstopo said:
I then shortly thereafter caught one of the bluefish on a tan Borski slider
Click to expand...

Do you tie a traditional slider or have your own take on it? The slider is a fav or mine for south florida.

Wet wading on the Middle Provo River here in Utah from 10:30a-1:30p... water was perfect, running clear and 52* F... Drakes are done but plenty of caddis flapping around and PMDs trickling off after lunch. Procloeons and Iron Blue Quills filling in the gaps. Put 16 browns in the net swinging soft hackles - nothing big. Long-line released another 10 or so.

Hopefully; however, tuesday looks like we are going to chase sun and wind is 20...wednseday still chasing sun wind still 20,thursday looks best ..so probably start for Tarpon rolling at dawn if wind down so we(I) can see them rolling ...now the challenge is going to be... this is one of my first KW guides haven't fished him in 5 years ...thought it was good to seek nostalgia but he does not have a Chittum Spyder cage so if there's chop the old man going to be stumbling about on the casting deck and trying to brace on the casting platform...sure won't be standing on it...but he always finds Tarpon...at worst I'll stand in well/deck and cast...hell growing old but the alternative is worse

Which Dave? Either way you are a lucky man. Enjoy.

I was fishing a little farther north than Stenacron yesterday, heading up to the Logan Canyon to get out of the heat and throw some hoppers. It was eerily cooler than the expect upper 90s due to wildfire smoke drifting over from CA and Oregon blocking some of the sun's heat. It was a pleasant 82 air temp to go with the 57 degree water. The hopper action was mixed, but was able to entice some cuthroat and browns over the course of a day hitting some of my favorite sections of the river.

The real treat was an unexpected delay in the afternoon when a mother moose stepped out into the drift off the right bank about 30 yards upstream of where I was fishing. I stood and watched as the mother warily sized me up, and once she decided I wasn't a threat her two calves emerged from the trees and proceeded to take a dip and munch on some riverside leaves. I watched them for about a half hour until they decided they had their fill and slowly climbed out of the river and disappeared back into the woods. I managed a couple more cutthroats to the net, then headed back into town for a burger and a beer before driving home. It was a great day. Got a quick pic, that dark shape is Mom chomping leaves off the bank on looker's right in the middle of the riffle section. 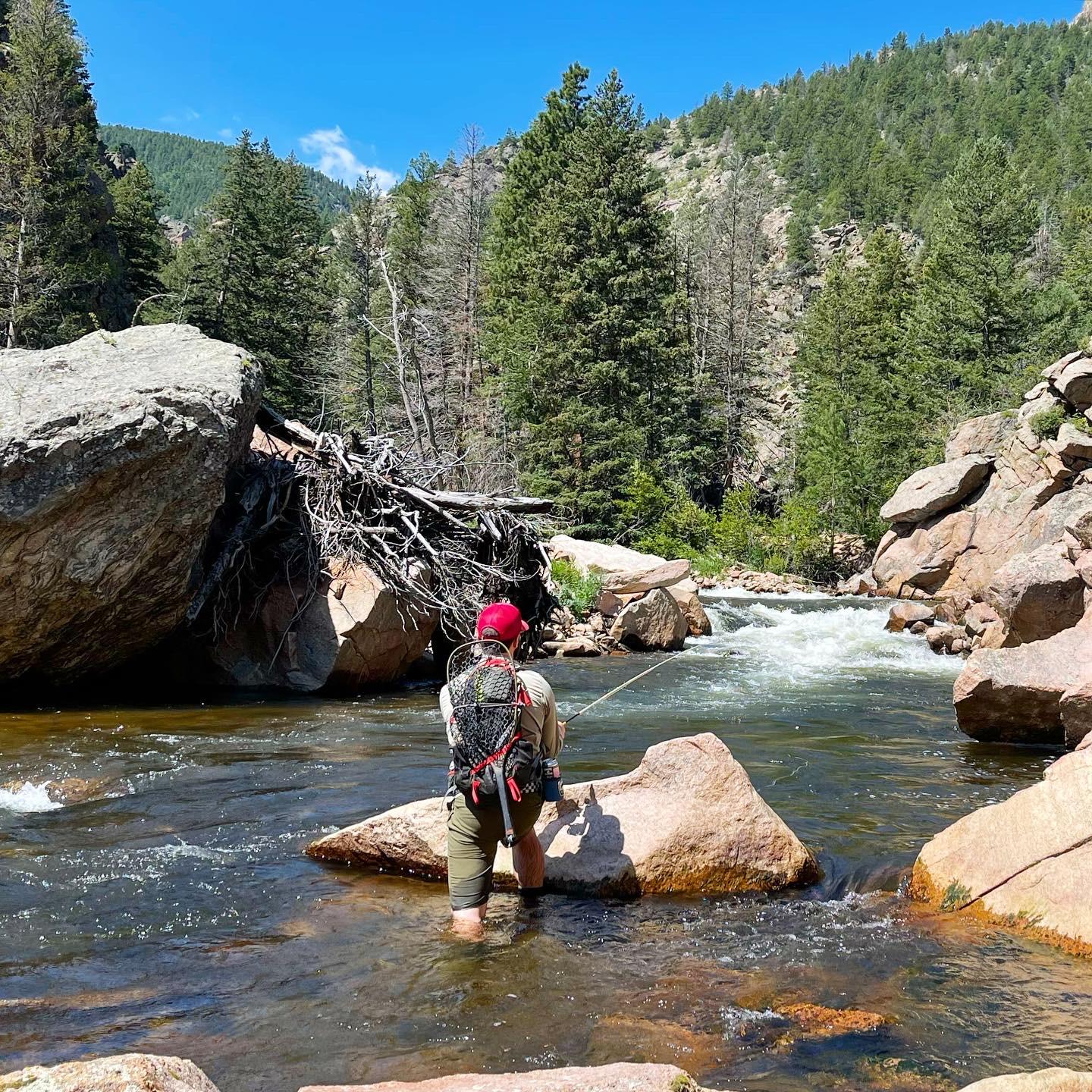 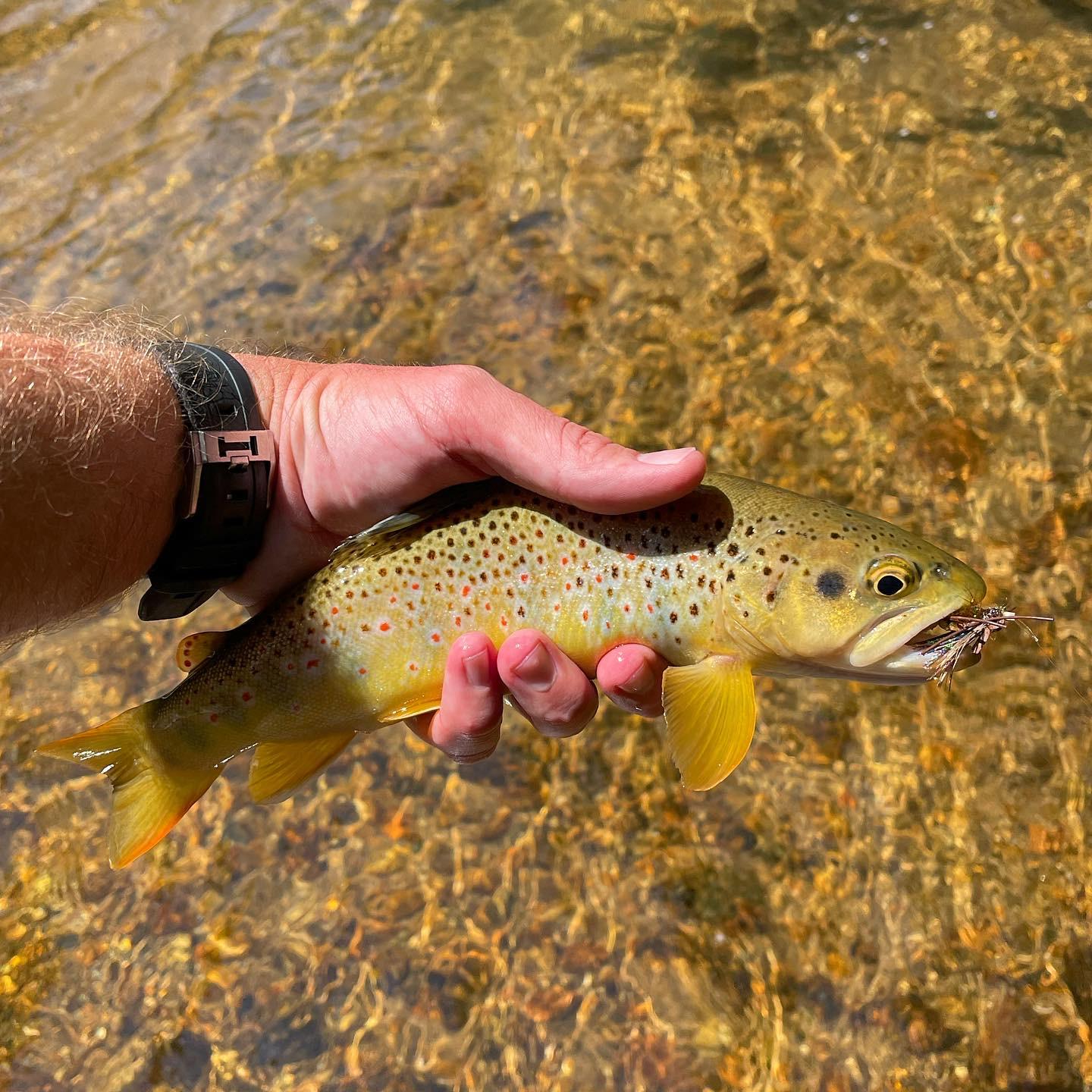 fatbillybob said:
Do you tie a traditional slider or have your own take on it? The slider is a fav or mine for south florida.
Click to expand...

This version has small tungsten dumbbells. Size 4 SL-45 hooks. Pretty standard, just sinks faster with the tungsten. I fish tan Borski sliders for lots of different types of fish, surf, marsh, bay, even open water to surface feeders. I try not to make them very fluffy unless I deliberately want a slow sinking version. So most might be a little on the spare side.

I've been driving uphill, out of town a few times in the last week. It's been interesting, checking out some of the areas that burned last September, and looking to find cooler water. Driving through the fire zone feels like you're driving through a war zone.
Did a couple wade trips and a float. Lots of small to medium sized rainbows and a couple cutties. It's been all dry flies for me. There's a few caddis around, but there are still enough PMD's and other assorted may flies to keep the fish rising.

My buddy reaches for the seam along the far bank.