Why target salmon during spawn?

All this talk about the salmon run in the Great Lakes has got me thinking, why is it cool to target these fish during their spawn and guarding redds? It seems we go out of our way to avoid species like trout and bass while they are spawning. Why is the same treatment not applied to salmon?

I’m not trying to take a swipe at anyone who does this, I was out there myself a few weeks ago. I’m wondering if there are ecological reasons or is this just an old practice that has become the norm?

Hmm, I believe it is because a majority of salmon species die soon after spawning. Bass wise its pretty common atleast here in the southern US to bed fish for bass maybe up where you are its taboo or actually illegal to target them. How ever I'm of the if they aren't actively on a redd or bed they are fair game mind set

Sent from my SM-N960U using Tapatalk

I can speak for fishing the Wisconsin rivers that connect to Lake Michigan.

There are three issues.

The first is whether the Lake Michigan coho and chinook salmon that enter Wisconsin stream can spawn successfully. For the most part, the salmon cannot reproduce.

From the Wisconsin Dept of Natural Resources:

The spawning streams on the Wisconsin shoreline of Lake Michigan are not conducive to natural reproduction of trout and salmon because the summer water temperatures are too high for survival of trout fingerlings and heavy loads of sediment smother eggs incubating in the stream bed."

Now the with some natural reproduction and a low alewife population, stocking is decreasing. See: 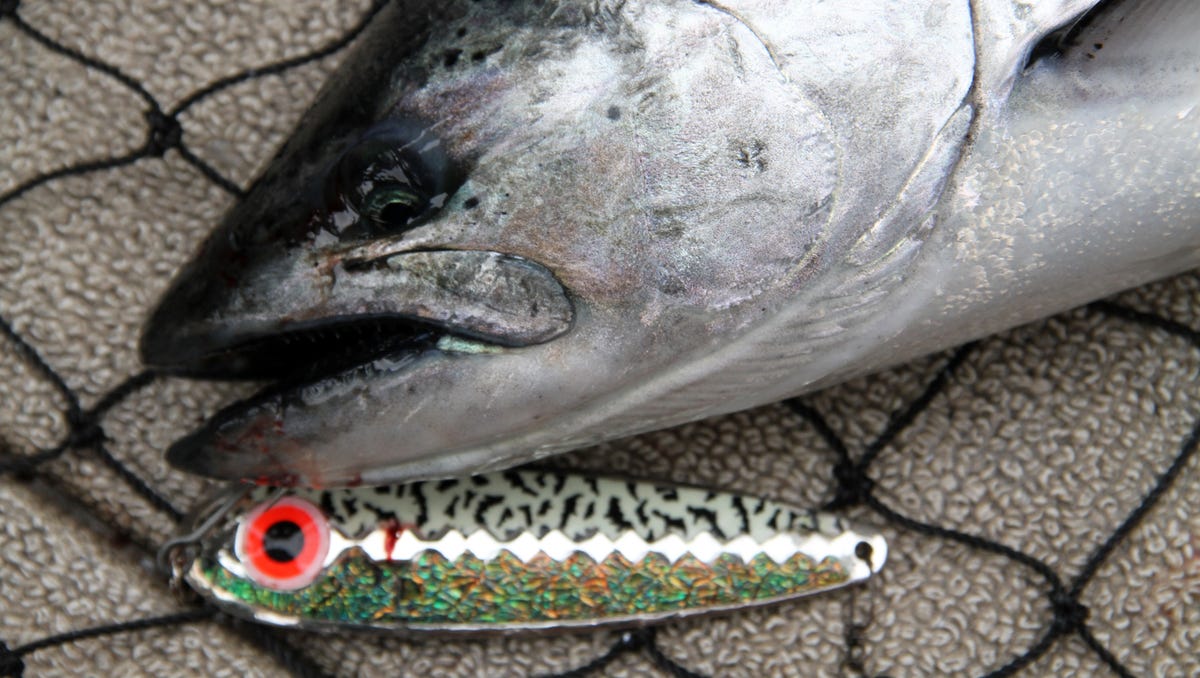 Smith: Lake Michigan chinook and alewife are near the desired balance, a new report says

The latest estimates boost confidence in the future of Lake Michigan salmon fishery amid lower reported levels of forage.

The third issue is the invasive species especially zebra mussels which filter feed and eat up the plankton and algae that support the food tree that eventually feed the small food fish for salmon. So there is less food for the salmon and trout in Lake Michigan.

With fewer alewives there is less need for Salmon to control them. Since the reproduction of Salmon in Wisconsin rivers is poor, there is little harm in taking them prior to spawning.

Upstate08 said:
All this talk about the salmon run in the Great Lakes has got me thinking, why is it cool to target these fish during their spawn and guarding redds? It seems we go out of our way to avoid species like trout and bass while they are spawning. Why is the same treatment not applied to salmon?

I’m not trying to take a swipe at anyone who does this, I was out there myself a few weeks ago. I’m wondering if there are ecological reasons or is this just an old practice that has become the norm?

Curious to hear your thoughts/insights. Cheers!
Click to expand...

This is a great philosophical question. Is it ethical to target species during their spawning cycle? When and where would this start? For Salmon would this be August when they're staging in the lake? Stop at the estuaries?

I don't have a boat....that's why I river fish for them and it's a more enjoyable experience than trolling with downriggers. Over the years....I have drifted away from targeting them in the River by coming later in the season when their spawning is almost over.

Should one target fish on their redds? No.....but legally you can and enforcement to illegal tactics is almost non-existant. Why is that? First off....they were planted in the Great Lakes as Silver states to control the Alewife population. Which it has done. Salmon die after spawning anyways and hatcheries, which support the fisheries, are still able to achieve their egg take counts and maintain their goals for populations in the lake. The fisheries are still healthy and thriving and bringing in plenty of revenue regardless of folks fishing over redds.

For the most part .......they are a hatchery sustained put and take fishery. There is a sanctuary section at least on the SR in NY behind and including the hatchery. Also, the upper sections restrict the tackle method to more challenging means and specify catch and release only.

If you see a Salmon on a redd should you target them?....Again, that is an ethical dilemma. For me....no....but I will target fish swimming to their redds through out the rest of the river or those opportunist ones feeding/fighting behind them.

It may sound barbaric and twisted logic to animal lovers.....but if there were no anglers that were participating in fishing for them in the rivers.....would we lose advocates that care about the health of these ecosystems? Would we have uncontrolled logging, dams, runoff and poor water quality, etc that limits their survival? Would there be funding cuts for hatcheries. I'd say yes on all points. The same logic holds true for hunting...... Sportsman are great advocates for a healthy environment with rules and regulations in place to control how it is to be done so that it's sustainable for this and future generations.
D

The line my friends and I have always drawn was to avoid deliberately fishing to and taking hen salmon off of their redds. The males stacked up behind them were fair game as there were always more in line to replace the one or two temporarily removed.

Taking the hen killed the spot, often for a long time, and in our view was too disruptive of the spawning event -- a wholly aesthetic point admittedly w/o much real measurable impact on the annual runs which are far more reliant on DMV restocking and big lake conditions than on our puny catch and release depredations. Although we rejoice in the hookups and battles with the salmon , we also spend a good deal of our "fishing" time just watching the spawning critters,

And, like the salmon, each fall we are drawn back to the Pere Marquette whose magic seeps into the blood though waders.

Your question has a very simple answer. You would be fishing for salmon during the "run" not while actively spawning. Every species of salmon I have fished for experiences morphological changes within just a couple to a few weeks of entering the natal waters. These changes are evidenced in many observable traits but color is the most readily observed in most waters unless too deep or colored to allow a visual by the angler.

By the time salmon are actively spawning they have 'turned' and the nesting sights preferred by many species will be near the tail areas of runs and pools where the water is becoming more shallow and gaining current speed as it exits the run or pool. If people are in fact casting at turned fish that are occupying a nesting site these people are either ignorant or desperate. That would mean ignorant of fisheries biology and the fact that turned fish are no longer decent table fare. If they are desperate this would mean they are so desperate to feel a salmon on their line that they may qualify as both desperate and ignorant both.

So, you fish for salmon when the run is fresh. Generally a run of fish entering a river will number into the thousands and will take up to 2 - 3 weeks for the entire 'run' of fish to enter the river and then transit upstream to those preferred nesting areas. If or when anglers travel to a fishery long after the actual run has already entered and transited the river those anglers have 'missed' the run of fresh salmon and are now fishing over spawning pairs.

For a simple answer I do seem to require a lot of words huh?

...because people are lazy and lack the most basic fishing skills. And instagram.

"I don't have a boat....that's why I river fish for them and it's a more enjoyable experience than trolling with downriggers. Over the years....I have drifted away from targeting them in the River by coming later in the season when their spawning is almost over."

My sentiments exactly!! I am a flyfisherman exclusively and enjoy flyfishing for all species of fish which I pursue. Targeting salmon during the spawn allows me a chance to fish for them the way I enjoy as I don't relish the idea of fishing for them on a boat, in the lake with bait and downriggers. The downside of this, however, is the narrow window of opportunity you have in regards to time and also, the ethical issues brought up previously. For Kings, it appears to me (based on my VERY limited experience fishing for them, mind you) that you have approximately 4-5weeks potentially of good fishing, maybe 6 or even 7 on a good year, in which they can be fairly caught(i.e., not foul hooked because they will no longer will strike lures). The longer they're in the river, the more inclined they are to NOT strike lures any longer due to their anadromous nature, and ,the fact that their deterioration eventually reaches a point where there sole purpose is to successfully reproduce and then expire. Previoius Predatory/instinctual responses compelling them to strike baits-that were present and active early on in the run- now , are , for all intents and purposes, completely gone.

Why fish for salmon in rivers? Historically it was for food. people used nets, spears, boards and woven baskets among other means, also there are artifacts of carved bone fish hooks and woven lines. I'm not going to type the entire history of salmon fishing in the world and a history of fly fishing for salmon because you can research that yourself.

Any spawning salmon are not chrome, so by logical deduction I am fishing the run and not the spawn. Wild kings on our end of the lake are incidental catches of people targeting lake run browns, which enter around the same time in late summer and later while fishing the steelhead run.

Coho`s early are tasty and targetable and not very easy to catch again many are caught incidentally fishing for steelhead and runs are wild and still plentiful on our end of the lake.

In a way its novelty because, a meal of sunfish and walleye is much easier to catch and way more plentiful but a coho or fresh king on the grill is nice once a year, pretty clean on our side of the lake, better check the fish advisories for your areas and rivers.

Salmon are not supposed to be here at all, stocking stopped many years ago, pinks were the result accidental dumping, cohos were stopped in the late 70`s and Atlantics and kings in the 90`s.

All in all the salmon, browns, brooks and steelhead seemed to have struck a balance, I dont think the salmon are ever going away completely they are making it on their own.

Is it ethical to fish for salmon that cant reproduce or shouldn't be there in the first place even if they do reproduce? That is entirely up to you, but personally I do not cast to anything on the redds or sight fish, not even sunfish. Get there before they spawn.
Last edited: Oct 17, 2020
You must log in or register to reply here.
Share:
Facebook Twitter Reddit Pinterest Tumblr WhatsApp Email Link
Top